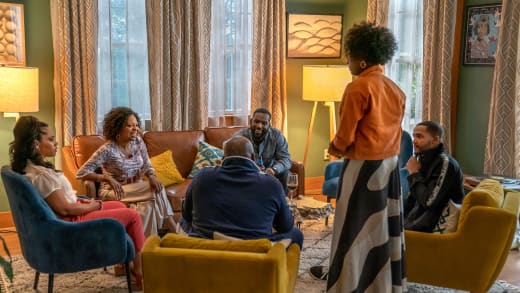 It was a tough day for the Bordelon family, and after Queen Sugar Season 7 Episode 5, it looks like, at least for some, it is destined to get worse.

As nervous as Nova was to ask her family about making Blessings and Blood into a movie, it went well with almost everyone.

Surprisingly, Aunt Vi was far more open and forgiving than was expected. The thought of Oprah playing her in the movie, and a hefty paycheck, had her smiling.

Violet: Oh, Nova. Baby, that book caused a whole lot of pain for all of us.
Nova: I know, and I’m sorry.
Violet: But baby, it also aired a lot of dark secrets that needed light in order for us to heal.

Even Hollywood and Ralph Angel were ready to jump on board.

But Darla was a different story.

Chase’s call had that horrible moment rushing back for Darla when she was too incapacitated to tell Chase no and make him stop. It’s likely that much of the vehemence she felt screaming no at Nova was also meant for Chase.

Would Darla have said no if Chase hadn’t called?

Likely, the intensity wouldn’t have been as severe, but the answer would have been the same.

And once Darla let loose, she didn’t hold anything back.

Do you really think I want to watch my assault with actors in costumes? Do you think that I want that out there for Blue and Tru to see any more than you’ve already exposed it? All this shit you stirred, do you think I want that rewound and streamed on people’s TVs for years, Nova? Hollywood finding me unconscious. Telling Ralph Angel about Blue, which almost killed me. You think these are great scenes, Nova? Are you crazy? Are you out of your mind?

Getting the phone call from Chase had Darla staring longingly at the glasses of wine on the table in front of her, and that was before Nova brought up the possibility of a movie.

It left Darla completely devastated, and why wouldn’t it? That book was the catalyst for Darla’s relapse. The book rehashed the worst moments of her life. Why would she say yes to having that become entertainment for the masses on an even larger scale?

But at least Nova talked to Darla about it. At least she gave Darla the option to say no.

Nova: Take that down. That’s not your moment to sell.
Micah: I was there too. How is that any different from what you wrote in your book?
Nova: You’re auctioning off your parents’ worst day in the middle of your Mom’s campaign. It’s different.

Micah knows that posting the NFT of his mother was wrong. That’s why he tried to delete it.

He showed it to Nova, hoping for reassurance or absolution. Perhaps he thought she’d be more understanding since she profited from writing a book about the family. Like a partner in crime.

But Nova didn’t give him that. She called him out, and Micah got defensive.

There were moments it appeared that Micah would make things right. When he insisted Zane take the image off their servers, there was hope that Micah would admit to his mistake and try to make amends.

But when Micah heard that he’d made the highest sale in Ivory’s history, not only did he relent, he celebrated.

Micah’s decisions could almost be understandable if he’d grown up poor and was awe-struck by the wealth displayed in front of him.

But that’s not Micah. This wasn’t his first time in a limo or a private jet. He grew up with famous parents and never wanted for any material thing a day in his life.

And it’s not as though this is his art. At least Nova wrote her book. Micah didn’t even film that moment. He took someone else’s work and a horrible moment from his mother’s life, and stuck his name on it to make a profit.

Not only is Micah proving to be selfish and greedy, he’s also short-sighted if he doesn’t believe this will damage Charley’s campaign.

And even worse, Micah’s a coward. He’s trashing his mother’s life and then dodging her phone calls and his father’s texts. I had expected better from Micah.

I’m curious as to what Keke has to say about all of this since she’s always had her head on straighter than Micah.

What I hope to see next is Davis on his son’s doorstep, confronting him face to face. I don’t think we’ve ever seen Davis angry at his son before, and I wonder how Micah will handle it now that he’s in the wrong.

And what about this anonymous benefactor? Is Micah so naive that he’ll sign some long-term contract with only Zane’s input instead of his parents and their high-priced attorneys?

Micah has made so many poor choices that it’s anyone’s guess.

Elsewhere, Hollywood and Violet faced the challenge we all knew was coming. How to be foster parents to Dante and Joaquin with Ralph Angel living in the house?

As much as Ralph Angel is no danger to these kids, I can understand why the rule exists concerning no ex-felons being allowed in the same house with foster children. The risk is too great.

It was a little surprising that Violet was somewhat willing to let the kids go back into the system because Ralph Angel was family.

Hollywood saw that these kids needed them, and Ralph Angel was a grown man who could take care of his family, even if he did need a little help.

And as usual, Hollywood was there to give that help by putting an apartment in his name.

Hollywood is such a good man, and he’s a great foster parent. To say he’s saving Dante and Joaquin’s lives isn’t an understatement.

When I make a promise, I don’t break it. Anything you need, just let me know.

Hollywood had already saved Darla’s life once, and she may need his help again. She can’t tell Ralph Angel about Chase’s phone calls for fear that his temper will only make matters worse.

Honestly, I wish Darla would call Charley and tell her about the threats from Chase. Charley is smart, fearless, and calculating. I have little doubt she could put the man in his place.

And Chase is already proving to be a fool. All he has to do is keep his mouth shut and let the rumor started by Jordan blow over. Threatening Darla only gives them more credence.

But like most rapists, Chase wants power and control, and he gains it by bullying and intimidation. That’s the point of these phone calls; to scare Darla into submission and allow him to feel like the big man with all the power.

So what do you think, Queen Sugar fans?

Will Micah face the consequences of his actions, and from whom?

Can the movie be made without Darla’s story?

Will Darla be able to stand up to Chase?

And does Hollywood finally have the family he’s longed for in Dante and Joaquin, or will they leave him heartbroken if their father returns?

This was the best episode of the season so far, so hit that SHOW COMMENTS button below to let us know what you think, and then check back for our Queen Sugar Season 7 Episode 6 review.