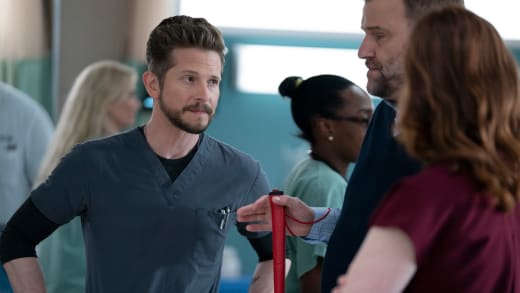 It’s hard even to process how one bullet can cost and cause so much.

But The Resident Season 6 Episode 3 did an excellent job of putting the issue with gun violence and the strain it puts on the healthcare system front and center in a fast-paced, intense hour.

Feelings regarding political slants with storytelling can be met with mixed results, but frankly, the hour was its best with exploring this issue and the far-reaching ramifications. It was its own statement.

It’s not the series’ first foray into gun violence and how it impacts hospitals, patients, medical staff, etc. But this was a refreshing take, particularly the timetable that followed up on Conrad’s earlier statement about GSWs.

One bullet in one patient required the skillset of upward of 100 healthcare professionals in a single day.

And we spent the entire hour seeing how that played out, how an overworked and understaffed public hospital routinely ate all of these costs, dedicated all of these hours, and used up all of their resources to attend to the wounds of an unknown patient they referred to as Eucalyptus.

One bullet can require 100 healthcare workers to fix the damage it causes.

GSWs send the entire hospital into disarray as suddenly everyone and their mother get called into the mix to save this man who was getting eviscerated from the inside out.

And not only did the healthcare professionals and the hospital’s resources pay the price repeatedly for this, but so did other patients.

The anxiety that befell those moments with Billie constantly having to push back surgeries, redirect patients in need, and prioritize and triage was intense.

The effects of that day and all that scrambling will linger for weeks and even months as everyone tries to get back on track. And after a long, stressful day of that, Conrad and the others could barely make it out the door before another GSW victim got wheeled through their doors.

They have to start the whole harrowing, emotionally draining process all over again.

Every aspect of the team struggling to save this man as it proved to be a detriment to them on multiple levels, was quite riveting.

The series continues to expose the pitfalls of public hospitals and what they readily face at every turn.

While the operator’s response to Conrad and Cade was appalling, it wasn’t remotely surprising that Yates, a private hospital, didn’t want to incur the headache, expenses, or taxing pull on their resources by tending to an unknown gunshot wound victim.

As Conrad and Kit pointed out, penetrative wounds like gunshots and stabbings are immediately associated with low-class individuals and poor people, which, of course, is equated to no insurance.

Kit: Blunt trauma victims, car crashes, workplace energies tend to be middle-class, well-insured. Private hospitals, like Yates, are happy to take them and make a nice little profit.
Conrad: Money talks and penetrating trauma victims, shootings and stabbings are uninsured.
Kit: And get sent to public hospitals like Chastain, and we suck up the costs.

And no hospital wants to eat all of those expenses without a payout. Yates would sooner have Eucalyptus die en route than cross the threshold of their hospital, which is about as inhumane and vile as it gets, yet strictly economically sound.

It’s scary to even think about the standard of care people get or don’t get because of their insurance or lack thereof.

And Eucalyptus required a lot of care. He hadn’t even reached the total limit of necessary care, as, by the end of the hour, he still needed to get transferred to a long-term healthcare facility.

But by closing, he had racked up nearly half a million dollars of expenses. He tapped out their blood supply, and we already know there is a shortage of that.

And that was disturbing on new levels because it meant that dozens of other patients in need, including Padma, didn’t have the blood they needed either.

He required one-on-one care from a single nurse, and they were already short-staffed as it was. At some point, the guy required a dialysis machine, the only one left, which meant some other patient in dire need could be left in the wind.

At every turn, they were forced to get creative and pull off minor miracles to save this man, keep everything else functioning, and attend to other needs.

By the end of that storyline alone, I was exhausted on their behalf, wrung out from all chaos, red tape, and so forth.

You could visibly see how stressed out Kit was by the whole ordeal.

Leela: How does one bullet cause this much damage?
AJ: Small caliber, low velocity. The bullet never exists the body, just bounces around tearing up the organs. It’s incredibly destructive.

She was torn between trying to provide the best possible care for a person in dire need, no matter who he was and how he got there, versus grappling with the way a single man was draining the entire hospital of all of its resources in a matter of hours and would drastically impact the care for hundreds of others.

Amid all of this, Conrad and Cade had their first official couple’s quarrel. Naturally, Ian would be at the center of that.

It’s tough because you could understand where they were coming from here. Cade, who doesn’t strike me as someone who confides in others easily, shared something with Conrad in the cloak of night in confidence.

She barely had time to process her hunch and make an actual move before Conrad spoke to Kit and called for a random drug test of the medical staff.

And we know for a fact that if it were Conrad’s father, he would have held off on going directly to the boss and had some one-on-one time with the man before he took the next steps.

You can understand Cade’s frustration and how it may have even felt like a breach of trust. She needs the night to think about things and reflect on what happened.

Whereas, from Conrad’s perspective, the situation with Ian is serious. They can’t afford to have a doctor operating on children while he’s under the influence of substances.

He’s already been at this rodeo with doctors, and Chastain can’t afford to have Ian screwing up or jeopardizing his medical license under their watch.

Conrad also knows the complicated relationship that Cade has with her father. As a naturally protective person, he likely thought he was sparing her by taking the initiative himself.

Unlike some of their previous colleagues, he doesn’t know Ian well enough to feel the need to protect him either. If something turned up, they needed to know sooner rather than later, and it wasn’t the type of hunch that one sits on and waits until the timing is right.

Conrad doesn’t feel he’s in the wrong at all, based on some of his phrasing when they had their chat. He wanted Cade to know that he heard her perspective, but that’s not the same as agreeing with it.

It’ll be interesting to see how this issue with Ian chips away at them as a couple. They’re great partners in the field and on the job, but there’s still something off about them as a romantic pairing between those moments. I doubt this situation will help with that.

Cade’s instincts are right, though; you can tell that she still doubts her father. She doesn’t buy into his excuse that he tested positive for benzos because of back pain meds.

Ian covered his tracks this time by flushing out his system as much as possible and using over-the-counter meds to mask whatever narcotics he was taking.

But it’s going to catch up to him at some point. We just have to wait until that day comes patiently.

Padma’s pregnancy has garnered some mixed results from the lot of you. It has felt as if it sidelined many of the B-Team who got saddled with this plot because of their connection to her. It’s no getting around that, particularly for AJ and Devon.

But they found a way to work in how that one bullet affected her too. Eucalyptus tapped them out on AB blood, and she almost bled out on a table without any backup because of that.

While there was little doubt that she’d survive this ordeal, it wasn’t any less stressful. She hasn’t had an easy pregnancy at all.

Her fear about that c-section was warranted, but at least she had Devon there with her for most of it, and Leela was the one who saved her sister in the end.

They’ve done wonders in hitting home how impulsive Padma’s decision was and how she’s been processing that more recently. It grounds her a bit and makes her less of a ditzy, self-absorbed hippie sort she came across as when she fixated on the baby thing.

Padma can be a great mom and has the support system around her to guarantee that. Something tells me that she’ll need it now more than ever.

Did anyone get the impression that she could be suffering from post-partum already? Labor and delivery are the closest most ever come to death, and Padma has had two near-death experiences.

Her body is worn out, and so are her mind and emotions. Not only don’t I believe Padma’s storyline is over, but it won’t be easy.

Devon overheard when Padma made Leela promise that the babies would have someone looking out for them if she didn’t make it out of that c-section. But now, it may come to fruition in a different way if Padma’s insecurities and regrets pile up and she battles post-partum depression.

It feels like there was something more to that scene than Padma nearly dying. And we already know how Devon felt about kids. He’s practically been Padma’s babysitter this entire pregnancy.

Devon, Leela, and AJ could have their hands full with those precious baby boys.

The pure joy and wonder on the Raptor’s face when he held his sons was one of the sweetest things about this whole arc and definitely made it all worth it. He’s going to be such a great dad!

Over to you, Resident Fanatics. Hit the comments with all of your thoughts.

You can watch The Resident online here via TV Fanatic.