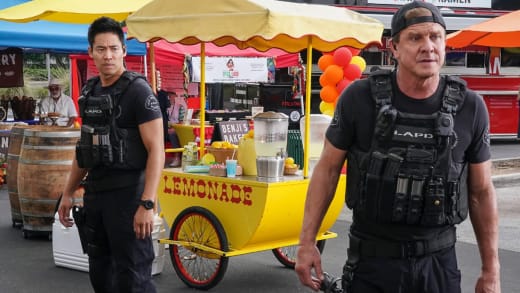 20-Squad is going big for the midseason finale.

On S.W.A.T. Season 6 Episode 8, Luca starts rethinking his decision with the food truck as Nichelle struggles with the aftermath of an incident at the center.

Meanwhile, Deacon helps his son after getting suspended, but it may lead to something bigger.

Midseason finales are usually a hit or a miss, but S.W.A.T. certainly did not miss.

From emotions to action, it was a mix of intensity and heartache.

As mentioned for S.W.A.T. Season 6 Episode 1, Rochelle Aytes was upped to series regular for this season.

This opened the opportunity to include Nichelle in more storylines.

The show definitely delivered for this episode, and it could eventually have a lasting effect on her.

I used to think of this place as a kind of sanctuary, you know? But I was defenseless, as they were banging on my office door.

When Nichelle got to work, she saw that the center was robbed, and she found herself locked in a room, terrified.

Nichelle, in turn, felt the need to carry a gun so she could feel safer.

Hondo, worried as ever, wasn’t too sure about it, knowing how Nichelle initially felt about guns.

When she brought up the fact that Annie got a gun after her and Deacon’s house got shot up, Hondo really had to think about what he wanted for Nichelle.

After he talked with Deacon, he showed his support for Nichelle.

He even called her to the range at HQ to try her hand at it, but that’s when she realized she didn’t want to be on that end of the gun, responsible for taking a life, especially if it was one she knew.

Despite Nichelle being scared, she knew she didn’t want to own a gun, at least not right now.

It’ll be intriguing to see where this storyline goes if it continues in the new year.

With Nichelle being pregnant, we’re bound to get Mama Bear-like stories.

All I could think about this morning was the need to protect myself and our baby.

We haven’t really seen this side of her before, so it’s been really refreshing and opens up the possibility of more storylines.

The community center is supposed to be this safe space, and now it’s not.

How that changes in upcoming episodes will be something to look forward to in the future.

There’s also how Hondo will move on from this.

He was supportive of Nichelle getting a gun, even though he wasn’t too sure about it.

He will always worry about her, and being a cop just heightens that worry.

No, the power that I lost that I need to regain, that’s not gonna come from anywhere else but inside here.

Especially now that they have a little girl on the way.

Seeing how that plays out throughout the rest of the season should definitely keep things compelling.

This episode was also pretty big for Deacon.

We don’t get to see his family too often, but we did get to see him deal with a heavy situation involving his son, Matthew.

Deacon has always been a family man, and seeing him with Annie or the kids, you know it’s going to be a good time.

It was discovered that Matthew got into a fight at school and was suspended, but he wouldn’t tell his dad the reason why.

Deacon tried getting advice from the others and even trained Matt at HQ because what else can you do when he’s suspended?

In the end, Matthew admitted that a kid told him that all cops are killers, especially S.W.A.T.

Not only that, but he said that they deserved to get their house shot up a few years ago.

While Deacon didn’t like what the kid said, he told Matthew that it’s still never okay to get into fights, and it’s better to love than hate.

Just because somebody said something you don’t agree with, it doesn’t give you the right to hurt them.

Whether this storyline will continue on in the new year will be something to look out for in upcoming episodes.

S.W.A.T. is known to hit on heavy issues, but involving the kids is like a whole new territory.

It was surprising that the Kay house being shot up was brought up, though, since it was a few seasons ago.

This makes me think that it could start to have more of an impact on the family moving forward.

The fact that it was brought up twice in one episode since Nichelle mentioned it to Hondo and Hondo to Deacon that does make you think more about it.

It’s possible this storyline will continue to grow, so hopefully, this won’t be the last time we come back to it.

Another storyline that had its long-overdue revisit was Luca’s food truck.

It seemed like it had been a while since we saw Luca or anyone on S.W.A.T. work the food truck.

Since the main storyline centered on a food truck festival, it only made sense.

Look, I bought the food truck because I thought it would bring the team together, you know? Keep us all connected.

Due to Luca being busy with S.W.A.T. and focused on other things, Guate-mama’s has been lower down his priority list.

He really heard a mouthful from the chef, and for a good reason.

Luca wanted the food truck in the first place because he thought it would bring the team closer together.

Unfortunately, he came to the sad conclusion and realization that with Chris gone and everyone else working on different things, it’s not the same.

I’m gonna be around to help more, starting right now.

Luca put someone else in charge of the food truck but still promised to do work and put more focus on it.

While I was hoping that we would get some scenes of the team working the food truck, there is still some hope that we could get that in the future.

At least for now, it was finally acknowledged that Luca does, in fact, have a food truck, and with him promising to utilize it more and not put everything on the workers, anything is possible.

This episode didn’t have a cliffhanger, which was surprising.

It did on some lighter notes, which was definitely a good thing, but it makes me worried for how the second half of the season will go.

There were definitely some good setups for potential storylines that will likely be big in the new year.

I want to spread that happiness as far and wide as I can.

How big, though, is unknown.

However, it should be intriguing to see if anything builds up to something even bigger.

So, Fanatics, what did you think of the midseason finale of S.W.A.T.?

Do you think the storyline with Nichelle will have a deeper impact on her and Hondo, especially with their baby on the way? Could Nichelle see the center differently moving forward?

As for Deacon, how do you think the aftermath of what happened with Matthew will affect him, if at all? Are you hoping to see more of that in the future?

With Luca wanting to turn his attention more toward the food truck, would you want to see more of the team working it? It would definitely make for some fun content that we rarely see.

Share your thoughts below and be sure to watch S.W.A.T. online via TV Fanatic!

What You Should Know About ‘On My Block’ Before Watching ‘Freeridge’
7 Burning Questions for the Second Half of ‘Yellowstone’ Season 5
Will ‘Clarkson’s Farm’ Be Back On Amazon Prime For Season 2?
The Bachelor Season 27 Episode 2 Review: Three Franchise Veterans Return!
Annie Wersching Remembered by Celebrities and Colleagues: ‘A Ray of Sunshine’
Follow us on Facebook
Follow us on Twitter