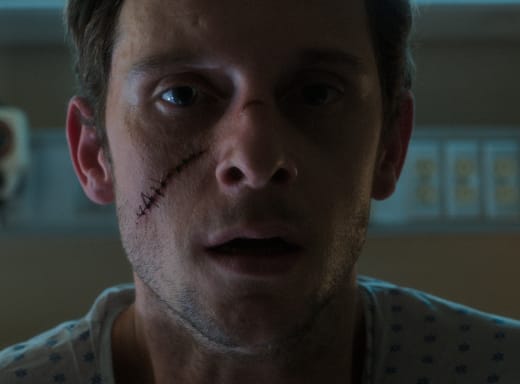 She learns more with every encounter, and she’s banking that knowledge to better understand her situation.

Kirby knows now that Harper is experiencing the same shifting reality that she suffers, and it throws him off-kilter.

She’s finally got a leg up on him. Every shift is entirely new to him, but Kirby has had years of learning how to navigate the shifts and act as if nothing happened.

Of course, he witnessed one shift and his effect on Kirby through the window of Jinny’s place. For now, he doesn’t necessarily realize that she has an effect on him, too. But we’ve seen that in action.

The close they are to each other, the worse it is.

That scene in the window was beautifully shot, and it couldn’t have been easy to pull off the effect of Kirby’s transformation. It also showed how Harper steps in and out of the house at various times, reenacting his previous encounters.

The first time we saw that scene, he remained outside and out of sight. He had no idea about the shifts and had no reason to get closer.

He was still out of sight by nature of the darkness (which is why so many people like to keep their curtains closed), but he was also eager to see what happened when they connected.

Based on the previous interaction, he knew that he would have an opportunity to view her without detection. But the best news is that Kirby is safe as long as he has fun with it as he did in the window. He’s enjoying making her squirm, and his chat with Leo suggests he will want the why before saying goodbye.

Harper: I saw a change outside the house.
Leo: Really? Are you sure it’s not like the lights? Maybe you’re starting to slip, too.

But she’s gaining traction on him, too. His fascination with what’s happening is giving her more than he bargains for, and seeing his tattoo opened a door straight to Leo.

Leo is a confounding character. Harper is keeping him in a sanitarium, but what is it that makes Leo stay there?

So often, he has his faculties. He knows that he wants to go back to the house, that it’s his way home. Harper won’t let him, but Harper isn’t there most of the time. So why does Leo stick around?

Maybe interacting with Kirby will give Leo a push to stand up for himself. He sure knew what he was doing giving her the video.

On Shining Girls Season 1 Episode 6, we’ll get more information on Harper’s past, and we’ll see more of the girl in his video.

As you know, Madeline Brewer stars alongside Elisabeth Moss in The Handmaid’s Tale, and it’s exciting to see her pop up here. She’s as electric as Moss in her roles, and she’s got a nice story ready to unfold here.

If you checked out our Shining Girls exclusive clip, you know how I felt about that scene.

I’ve always known that the police don’t generally care much about victims (prove otherwise), but the way the sketch artist interacted with Kirby was particularly irking.

If there’s one thing that a victim of any crime needs in its aftermath, it’s to be heard. Trauma requires patience and compassion. Understanding would be nice, but until you’ve been a victim, it’s not possible to understand fully what the person experienced.

So all we really want is for someone to hear us, and the sketch artist wasn’t listening. Even worse, he was asking about her routine and what she was wearing, whether she wore perfume.

How were any of those questions relevant to her attack? He was insinuating that she provoked the attack, and that’s not how crimes work.

Sketch Artist: A composite isn’t a portrait. Some stranger won’t recognize him off the street. That never happens.
Kirby: Then what am I doing here?
Sketch Artist: We just need enough details for someone who knows him, so they can recognize the sketch.
Kirby: It won’t work. No one knows him.

Still, I appreciated how it was interwoven into the conversation since it’s a relative unknown to many of the difficulties victims face in their traumatic aftermath.

Other than the sketch artist, this was the hour when people were hearing Kirby, even as she struggled with numerous reality shifts.

Marcus has been an outlier to what Kirby is experiencing. He popped into her life with a full history without a moment’s notice.

Dan: Have you talked to Marcus about this?
Kirby: That’s what I’m telling you. I never married him. I just came home one day, and he was there.
Dan: I don’t know what to say.

I can only assume that his military history allows him to give Kirby the space she needs to be Kirby. Any other man would be pushing harder for explanations and inclusion.

Marcus merely waits and listens. He had one moment of near desperation as he tried to get Kirby to talk with him, but he pulled it back quickly.

I don’t know that I’ve ever seen Moss portray a character with as much vulnerability as she did when she turned to Marcus while eating her sandwich creation and said, “It’s good.” There was a look on her face and inflection of her voice that showed her as a lost little girl, and it worked.

The two best scenes involved Jinny. The first was noted above, in her apartment. The second was when Kirby shared how she and Harper shift.

Jinny was the perfect upcoming victim because, as a scientist, she grasps the big picture and the intricacies that create it.

No one really knows how we’re connected. Take two particles; they could be connected somehow like there’s an invisible thread linking them. They can’t act independently, so if you affect one, the other reacts in kind. Their actions are entangled. One impacts the other, even across all of space-time.

True scientists know that nothing is set in stone as science continually evolves. What they know of the interconnectedness of particles only offers a vague outline of how they could function until they encounter such a function in action.

Someone else could have shut down that avenue of discussion, but not only has Jinny seen enough of the strange story bubbling up around her, she also has a background that allows her to see all possibilities.

Kirby needed that. It helped her to share even more with Dan after an earlier failed conversation that ended in frustration.

Kirby [crying]: It’s not just him. Things change for me. From one second to the next. They’re different.
Dan: Please don’t do this.
Kirby: It happened the first time after my attack. I’d been out of the hospital for maybe a year. I had been back at work that whole time. So, I go into the Tribune, just like always, and security says that I hadn’t been there for months. They hadn’t seen me. No one had talked to me. There was someone else sitting at my desk. And then, I go home, and my mom was there. She said she’d been crashing with me. I hadn’t lived with her since I was a kid. She had no idea what I was talking about. No one did! Things change for me just like that, and nobody knows any different! And then it happens again and again.

As Harper was delivering Kirby a message through Jinny, Kirby had another chance to talk with Dan about it.

His car was different. It’s such a small change, but sometimes, it’s enough to give Kirby pause and question her mental faculties.

Not this time. The car he had previously was his former wife’s, and there was no way that Kirby could have ever associated it with him unless she was telling the truth.

I’m always a sucker for scenes in the pouring rain because they make you vulnerable but also offer a cleanse. Now, Dan understands that Kirby is experiencing something.

This will give him a better advantage point with which to help Kirby navigate her way through them.

Dan: When things change for you, do you recognize it?
Kirby: Sometimes. Other times they’re just random.
Dan: Maybe they’re what’s to come.

But what I didn’t understand is why he said maybe she’s seeing what’s to come. The timey-wimeyness of it leads me to believe that she’s recalling the past and the present concurrently within moments.

But for now, it doesn’t matter. All that matters is that Kirby has been heard. That will go a great way in how they track and stop Harper from killing again.

And just because he let Jinny live this time, we’ve seen just how easy it is for him to be one step ahead.

The next time, she might not be so lucky.