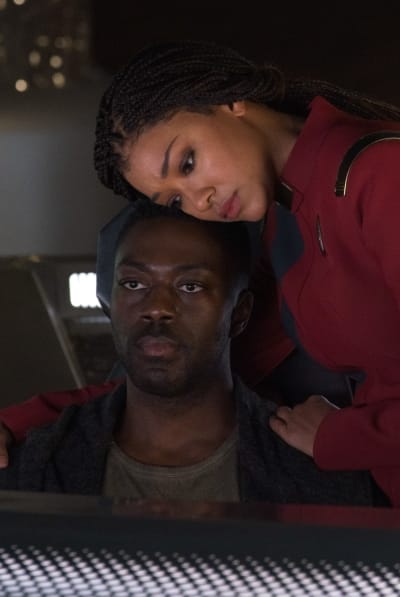 One of the hardest things to watch is an empathetic view is grief.

Star Trek: Discovery Season 4 Episode 2 unpacks not only Book’s despair at seeing his homeworld disintegrate but how the anomaly’s destruction has triggered strong feelings in Tilly, Adira, and Stamets stemming from their past traumas.

What lifts the narrative out of the potentially dismal spiral of darkness is how each character manages to make strides forward and commit to a future towards which they can look forward.

It’s unusual to see Burnham at such a loss as to what do as when she’s confronted by Book’s post-anomaly defensiveness.

Chalk it up to the events of her childhood or her Vulcan upbringing, but Burnham’s emotional toolbox holds little subtlety.

She wants to be able to face a problem head-on and solve it with heart and verve and maybe a little bit of luck, none of which is going to chip a speck off of the wall of blame and shame and denial that Book is living behind when Discovery is sent to collect data on the anomaly.

By the end, she may have released Discovery’s tether on Book’s ship, but she remains his tether to the world of the living.

It’s her voice that brings him back. It’s her promise to always be there for him that allows him to reconnect emotionally again.

For a person as empathically gifted as Book, shutting down in the aftermath of Kwejian’s destruction would be like having all your limbs chopped off.

There’s no way to interact with the world when you feel nothing, when all your emotions are focused on those who have died and who can no longer reciprocate.

Y’know, for so many years, I told myself I didn’t need family, didn’t need Kwejian. But then I found my brother again, a nephew I didn’t even know I had. And when I looked at Leto, I saw a new beginning. For all of us. We’d give him a future. Where there was a home and family. And love. And nothing he couldn’t do.

Interestingly enough, I believe it was Stamets who actually chipped the first sliver off that impenetrable wall.

Perhaps the least empathic individual on the crew, Stamets has avoided Book since the dilithium planet for (mostly) personal reasons.

Book: Ever since you found out I could run the spore drive, your ego got bruised, and you blamed me.
Stamets: Nothing to do with it.
Book: What is it, then?
Stamets: You remind me of how helpless I was. When I look at you, all I can see is how close I got to losing everything. You were the one who saved my family. I wasn’t able to do anything. I hate that feeling.

When he finally shares the helplessness he felt when only Book could save Culber and Adira’s lives on Star Trek: Discovery Season 3 Episode 13, there’s a moment of clarity and recognition on Book’s face.

Book’s vision of his nephew and his paralysis when provided with a plan and opportunity to survive the anomaly are both indicative of survivor’s guilt.

It says a lot about the strength of his character that he is able to resist the option of certain death because he is committed to bringing back the data.

In fact, if the data had transmitted successfully, it’s anyone’s guess if he would’ve taken the other path.

Stamets, in turn, makes a vow to use the data they were able to gather to solve this anomaly for Book and to put Book’s ghosts to rest.

Arguably — but I DARE you to argue this point with ME — the most profound commitment made here is Saru’s offer of himself to be Burnham’s XO.

More eloquent than the most romantic marriage proposal, rooted in genuine respect and friendship, and executed with Doug Jones’s most dulcet tones, Saru’s speech melted my heart like ice cream on Nibiru.

Our mentor, Philippa Georgiou, knew the value of another set of trusted eyes, especially in times of crisis. I asked you to be those eyes for me when I became captain. Now, it would be my honor and, indeed, my privilege, to do the same for you as your Number One, if you will have me.

Hand to my heart, I’ve never been more tempted to shout, “Say YES!” at the screen as during that beat when Burnham takes his hand.

Saru’s return to Discovery is seamless. While they recognize that he’s been gone, he steps into the role of XO like he’s always held it. And, maybe since we all subconsciously knew that Burnham was always going to end up as captain, he did.

Meanwhile, Gray seeing his synth body for the first time is the follow-through of Culber’s promise to him on the dilithium planet that he would bring him back.

The inside joke of referring to Picard as “some Starfleet admiral” is the cutesiest the series has ever been about canon.

It does drive home the fact that the Discovery, by traveling to this point in the future from where they were, completely o’er-leaped the eras of Kirk, Picard, Sisko, and Janeway.

Probably a good fact to be reminded of from time to time.

I suspect Gray’s incorporation may cause more insecurities for Adira when they lose the exclusivity of Gray’s companionship. Still, I’m hoping there will also be wonderful developments in the family dynamic as a result of it.

Things just don’t feel the same way that they used to. Something’s off, or I’m off.

Tilly’s been carrying a lot of baggage from her Osyraa encounter. While I loved her reconnection with Saru upon his return and her moments of sharing with Burnham, it’s hugely positive that she’s ready to talk to Culber now.

In a recent roundtable interview, Wilson Cruz mentioned that Culber takes on the dual role of medical officer and counselor this season and called it a “heavy lift.”

With what the crew of Discovery has gone through, even just since they landed in the future, his therapy couch may be fully booked soon enough.

While the initial anomaly data analysis doesn’t seem hopeful, there’s a lot of season to go.

Also, I’m eager to see how the Federation is rebuilding while the anomaly wreaks havoc on the universe. The politics — specifically the machinations of the new president, Lara Rillick — and the playbook have changed dramatically.

I would like to return to the Trill homeworld and see how Adira’s successful hosting of Tal has changed their culture.

The theme of commitment extends beyond the intention of the crew and Federation on the show.

Paramount+ demonstrates — with the resources and talent they are willing to engage — a commitment to flying Discovery as far as she’ll go at a level of quality that’ll continue to set a high standard for the entire franchise.

How did this first anomaly endeavor strike you?

Where do they go next with the data?

How about those moments of gravitational distortion? Did they just up the game from the space station gravity shenanigans from Star Trek: Discovery Season 4 Episode 1?

Fly your thoughts into the comments!