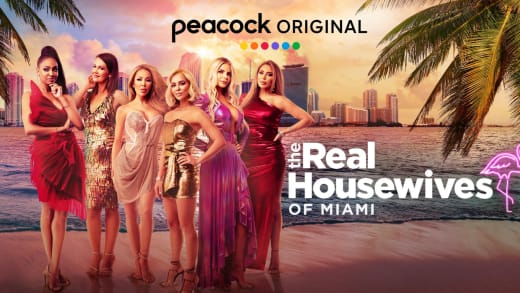 Fans had been clamoring for more of The Real Housewives of Miami since Bravo put it on pause following its third season.

The series returned in 2021 on Peacock for a fourth season, which was a huge success.

The Real Housewives of Miami Season 5 premiered today (December 8), on Peacock, with a four-episode drop.

Alexia Nepola tells TV Fanatic that the series returned at the right time.

“Everything for me is about timing,” Nepola shared, adding that she’s proud of Miami and how the series returned with such a significant impact.

“It’s like a huge thing to not be on TV for eight years and have all this competition with the other cities, and to come back so strong and for everyone to be enjoying it so much and liking it is, is a huge deal for me.”

Nepola credits the housewives for making the series a success but says none of this could have been possible without the passionate fans.

Dr. Nicole Martin said the response to the fourth season was incredibly humbling.

The star said she was getting messages on social media from fans saying they couldn’t wait until the show was back for its fifth season.

“It’s so overwhelming the amount of like, support, and love that the fans have shown us. And so to be able to be part of the reboot and to have like so much excitement like circulating around us as a friend group and you know, me as a person, so many people are interested in my life, it’s kinda like an honor,” Martin shared with TV Fanatic.

“It is an honor to be seen like that.”

Kiki Barth is proud to be a part of the show, revealing that she believes her castmates are an authentic and dynamic group of women.

“It’s a very dynamic group where we are from different places and different languages, different cultures, and when you put all of that together, it’s very different from the other shows in the franchise,” Barth shared.

“I just feel like that’s something that no one else can offer.”

I told Kiki that I felt like some of the other housewives shows have gotten much darker in recent years, but I felt like Miami always keeps the mood lighter.

“That is true,” Kiki said, adding that she believes this group of women are excellent.

“We’re more of a fun group. We argue, yes, we have differences. Yes, we all go through our own issues, but at the end of the day, we want to like have fun. We want to enjoy ourselves, we want to party. It’s a lifestyle, and that’s what Miami offers, and this is what makes it very different. That’s what the fans love about Miami.”

Kiki says fans should expect her to be more present this season.

“And I think that’s what happened. I think the fans just naturally loved my sarcasm, and they just love how fun I was.”

Kiki was happy about the response on her first season, but she wants to give fans more this season.

Alexia revealed that she was shocked by some of the conversations that happened during the fourth season, particularly between Adriana de Moura and Larsa Pippen.

Nepola felt confused by some of the things Adriana said.

“Adriana always has something to say, and sometimes it doesn’t make sense to me. I’m like, ‘I don’t know why you’re saying this like right now.'”

Alexia says she shouldn’t be shocked because she knows Adriana very well.

“Maybe answering it again, I would say nothing really shocks me because I know all these ladies, and I expect anything from them.”

Alexia touched upon seeing her life with Todd and her sons, Peter and Frankie, last season.

“It was very painful and heartbreaking to see that because you know, one thing is kind of like living it and going through it when it was happening, but then you get to see it again, play out, you know, on TV, and everyone’s watching, and everyone has something to say,” Alexia says.

“Luckily for me, I don’t read, you know, a lot of the things said,” the star adds, saying that watching the show back definitely impacts her family.

“Luckily for our family, we had already gone through it, and we were in a good place, but watching it several months after is hard,” Alexia adds.

“Even just thinking about it as I’m speaking it, it’s hard because when you love people, and there’s this kind of pain, it, it just makes it a lot more difficult.”

Alexia says that fans should be prepared for many highs and lows throughout the fifth season, but she liked that the friendships were more authentic.

“I think that what makes us like super different from other people is that we have a cast right now that we can like fight and stuff, and then we’re like, ‘oh, but we love you. Like, okay, I hate all this about you, but I still love you.'”

“I feel like as the seasons progress, more friendships become stronger, and then maybe you’ll see some friendships that were strong before, and now they’re falling apart. You’ll just have to watch.”

Nicole said there will be plenty of “OG on OG” drama this season.

“There’s a lot of like personal storylines that continue to evolve. Me personally, family drama, and so I think there’s a lot of surprises this season that people won’t necessarily expect going into it,” Nicole promised, adding that this season is a “rollercoaster ride.”

Return to TV Fanatic for some more sentiments from the housewives, particularly about the first four episodes of the season.