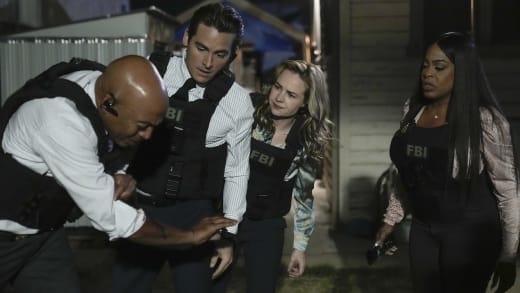 Romance — or flaring attempts of — was in the air.

Brendon and Antoinette’s first date was rocky on The Rookie: Feds Season 1 Episode 13. Carter attempted to dip his toes into the dating pool by using an online dating app, and Billie brought home her new friend.

Typical of office romances, opposing and tight schedules are the biggest threat. This was a phenomenon Brendon experienced firsthand.

Laura revealed that she and Mark had decided to give their relationship another chance and went all in on the long-distance dating.

Amidst all the running, posing, and gun fighting, romance was the central theme. And we might just as well focus on it.

When Brendon and Antoinette first showed interest in each other, I was on board with this potential relationship. If any office relationship was the most appropriate, it was theirs.

I’m not sure that is still how I feel about them after “The Remora.”

Simone: Oh, hey guys. Garza said classy casual, but y’all was showing out. They called in the lab techs too?
Brendon: Oh, no, we were just about to, you know…
Simone: Your first date, that’s right. Well, what now? You gonna cancel your plans?
Brendon: No, no, no. Just delay them.

Even before they could define what this thing between them was called, the job had already begun getting in the middle of it.

We all know this job can be demanding, as evidenced by Garza’s multiple failed marriages, Carter’s recently ended marriage, and Laura’s failed engagement.

The trappings are right there for anyone looking, even with the least interest.

First, we saw their date being interrupted before it had even begun when they were called into the office at odd hours. Then, later on, the job preceded the time they would have spent together in the hotel.

As they were gearing for a do-over, the job interrupted them again, and they had to settle for a work date with takeout.

That was not good. Being their first date, it was the time to make a great lasting impression for both parties. It was the opportune time to dress up nicely, have dinner at a nice restaurant, and forget the day’s stress.

A date in the office was the exact opposite. They spend many hours in this building, often learning about awful things. That was not a great place to start.

We are all rooting for them, but this is doomed to fail.

Brendon is still a trainee agent, and all the time he has should be focused on impressing his training officer and acquiring the necessary skills to do a great job and not get killed in the field.

Antoinette: Wait, you know how to cook salmone en papillote?
Brendon: Hell no. But I know how to order it.

It’s not the worst idea for them to be dating, but the timing is unfavorable.

After his divorce, Carter marketed himself but failed miserably. Online dating is the best way to find potential partners but it can also be intimidating. The man had never used an app before. The last time he went on a date, people used to write phone numbers on napkins.

Like social media, online dating can also be affected by angles. A single photo can generate a lot of interest even when it is not the true representation of the person. They don’t offer the opportunity for someone to present their natural self.

Laura: Hey, what’s up?
Carter: Set up a profile on clipmates.
Laura: Finally, dipping your toes back into the dating pool. Good for you!
Carter: It’s been a week. I’ve not gotten a single message.
Laura: That’s statistically impossible. Dating apps have been designed to bombard newcomers with attention, so they feel welcome. Here, let me see.
Carter: What am I doing wrong?
Laura: Oh, so many things.

It is a curated image that might prove disappointing for both parties to buy into.

The list of things that could go wrong is endless, especially when someone is not savvy about the current world and the dangers of the internet.

We can all admit that the chemistry with the nurse was off the charts, something you can’t see on a phone screen.

Laura and Mark decided to name their thing. Bad idea! The moment it is named, it somehow becomes too real, and the baggage becomes heavier.

Well, I do not wanna hear more complaints from you. At least your girlfriend is in the same time zone.

Despite having insane chemistry, they both should have known better. It was great when it was casual.

Their jobs, the physical distance, and the time difference are too many obstacles for the relationship to surmount.

Change is necessary and unavoidable. The only thing one can hope for is that they change for the better.

After becoming an FBI agent, it was expected that Simone would change. It shouldn’t have come as a huge surprise to her when Billie called her out on it.

Trying to beat it would be an exercise in futility. Instead of trying to keep each other from changing, Brendon and Simone should help identify the positive changes.

Parenting can be challenging, especially when children reach a certain age. Simone realized that Billie was grown and should be trusted to make her own decisions.

There was nothing wrong with Trevor and Billie’s relationship. They are both adults; not everyone wants to do what everyone else does. It doesn’t make Trevor a bad person not to want to slave his life away working.

Watching Simone and Cutty be on the same side as they tried to drive Trevor from Billie’s life was fun for a change.

The case kept the team on its feet, but it didn’t feel like much was at stake.

Between the competition with Kronner and the mind-boggling twists, it was hard to figure out what was happening and who the bad guys were.

I am always up for the twists, but please, can we make it so that the viewer’s brain doesn’t short-circuit?

Apart from a lackluster case, “The Remora” was a solid episode that developed the relationships between the characters.

It will be interesting to see how Brendon and Antoinette’s relationship progresses, considering how many odds are stacked against them.

It is always interesting to read your comments, so hit the big blue “Show Comments” button and let us know your thoughts.

It is yours to watch The Rookie: Feds online any time you want right here at TV Fanatic.