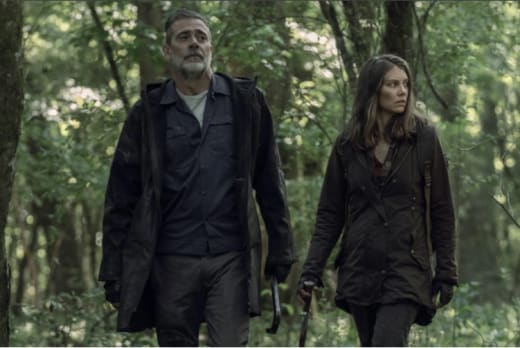 Revenge is a slippery slope.

The Walking Dead Season 11 Episode 5 gave us a look into Aaron’s psyche, and after being put in harm’s way too many times, he’s reaching a breaking point.

Who can blame him? If you watch The Walking Dead online, you know survival is paramount, and the stress of finding supplies, keeping his daughter safe, and his other duties are starting to wear him down.

The return of the Whisperers was needed because, like many other fans, I wanted to know what happened to the stragglers in the aftermath.

How did they react to losing their two leaders and way of life? Keith and his people were clearly struggling, and walking in a herd gives them safety in numbers from other living people.

The entire group was understandably terrified about how they would regroup following the deaths of Alpha and Beta, but Keith was clearly driven by fear. He didn’t know any other way to live, and he wanted to keep his people safe.

Aaron trying to kill him was not a surprise when you consider the events of the episode. He needed to blow off steam and wanted to believe killing this man was justified.

Carol talking him down was a nice way to tip the hat to Carol’s dark past and how some of the decisions in her life had probably not been the best.

Mercer: Hands up. Move away from the radio.
Eugene: No harm has been done. I can assure you.
Mercer: You’re under arrest, unauthorized use of government property.

Melissa McBride continues to deliver, and the raw emotion from Carol as she tried to tell her friend that revenge is a slippery slope was sheer perfection.

At least the goodwill gesture of letting Keith live yielded some results. Carol thought her actions in the cave had gotten Connie killed, so it was nice to see the look of relief on her face that she had, indeed, survived the caves.

Everyone knew Carol’s decision was selfish, but they also knew that she wanted to destroy the Whisperers, which explains why people have started to understand her actions.

We’re finally going to be meeting up with Connie and Virgil again on The Walking Dead Season 11 Episode 6, which is the scariest episode in the history of the series. Seriously, you’re going to love it!

The action at the Commonwealth finally picked up some steam, and I’m enamored with the way they go about life there. It’s like the real world, with a government, shops, bakeries, and such. You can even get some ice cream!

Bet you never thought you’d see Eugene getting ice cream and actually having to hand over money for it. Stephanie is nice enough, but there’s a complete and utter lack of chemistry between this couple.

She clearly has more pull in the society than we were led to believe, as evidenced by the way everyone was getting arrested for unauthorized use of government property.

While it was a stupid move to use the radio equipment this soon, it showed the stakes of living in an environment such as The Commonwealth.

Mercer was so desperate to deem the quartet villains, suggesting he doesn’t think they belong there, but when you consider their tall tale of not being with any other communities, you can understand why he’d want to make sure his community is protected from outside forces.

Using the radio confirms Eugene, Yumiko, Princess, and Ezekiel know there are other groups out there, and it will make the explanation process difficult. Who will believe a word of what they have to say now?

Will the Commonwealth welcome the Alexandrians? Let’s face it, Alexandria is about to collapse. It was such a thriving community for so long, but the Whisperer war has brought it to its knees. It’s a shame because it will forever be one of the best locations on the show.

Any community can only withstand so many breaches from the outside, and the struggle to revive the settlement makes this feel even more like a final season.

Well, the war is over. Alpha and Beta are dead, but Alexandria is trashed and we’re running out of food.

The Alexandrians would probably struggle to get acclimated with the Commonwealth way of life, but maybe some of them would love the prospect of having a regular 9 to 5 life again.

For the younger generation, like Judith, Gracie, and Hershel, it would be jarring because they’ve only ever known the desperate battle for survival.

Yumiko’s reunion with her brother was a rare heartwarming moment on the series, but I was much more excited by the prospect of what job is in the cards for her.

I’m thinking she’ll become some sort of government official, something that probably never happens to new people given the sheer look of shock on the face of the man handing out the letters.

The trick to thrive in the Commonwealth is not asking questions, doing your work, and playing by the rules. It’s not too much to ask, is it?

As is always the case with this show, I’m just waiting for the other shoe to drop. There’s always something more with these places, and we’ll probably delve deeper into it in the final episodes.

Negan and Maggie getting more screentime is always a good thing. The series works the best when it has multiple concurrent storylines in the one episode, and the desperate nature of finding safety from the Reapers worked very well to up the tension.

These two know they’re leaning on each other for survival, which is shocking when you consider their past. Emotionally, they are both struggling. They’re driven by the act of saving Alexandria from starvation, and it’s the only thing keeping either of them going.

The arguments are only natural. They hate each other, but they know they need to work together if they have any hope of feeding their people.

The arrival of Elijah and Gabriel so soon was nice because it subverted the expectation that Negan and Maggie would continue to bicker about the best-laid plans.

Maggie also relished the fact that Negan would have to agree to whatever she decided because Elijah and Gabriel would side with her.

Damn, this complicated dynamic between these two is a lot of fun!

“Out of the Ashes,” was my favorite episode in a while. The show is building towards something huge, and I can’t wait to see how it all plays out.

What are your thoughts on Carol helping Aaron?

Do you think Negan and Maggie will ever form a bond, or do you think they’re merely putting up with each other?

What did you think of the trip to the Commonwealth?

Do you think there’s more to it than meets the eye?

Catch new episodes Sundays at 9/8c on AMC, or one week earlier with AMC+.

Family Guy – Season 20 – Open Discussion + Poll *Updated 17th October 2021*
Supergirl Review – Hope for Tomorrow (6×15)
What Time will ‘You’ Season 3 be on Netflix Around the World?
The Flash: Rick Cosnett Set to Return!
‘Married at First Sight’ star Michaela spoils the fate of her marriage to Zack (SPOILERS)
Follow us on Facebook
Follow us on Twitter