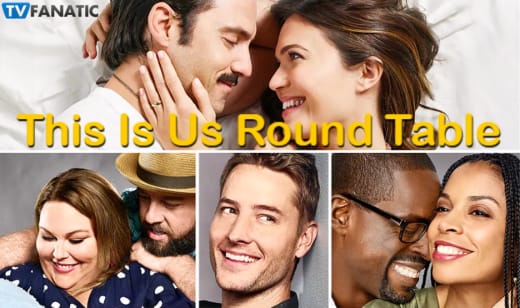 Nicky got closure, though not the renewed relationship he hoped to get. Rebecca made a new friend. And Deja took her relationship with Malik to the next level.

Our This Is Us Season 6 Episode 2 Round Table team discusses the bittersweet ending to Nicky’s romance, Miguel and Rebecca’s honest conversation, and which moments felt most poignant.

Check out what our TV Fanatics Christine, Laura, and Jack had to say about all of these developments.

Nicky learned Sally was married, and the flash-forward suggests he moved on. But do you think this is the last we’ve seen of Sally? Would you want to see her again?

Christine: With only 16 episodes left, unfortunately, this is likely the last we’ll see of Sally.

Finding her allowed Nicky to finally move on and be open to new love. But I wish Sally would come back for Rebecca. I really enjoyed their conversations, and Rebecca could use another woman her own age to connect with.

Laura: I also think this was closure for Nicky and Sally. But I agree with Christine. I wouldn’t mind her as a friend for Rebecca.

Jack: Agreed with all of the above. I thought that if everything had been different, Rebecca would have loved having Sally as a sister-in-law. The women hit it off right away, and I thought it would be good for Rebecca to keep the friendship up.

Miguel reassured Rebecca that he wants to be there for her as her dementia gets worse. Do you think this issue will come up for them again?

Christine: I think Rebecca will continue to feel guilty about Miguel having to be her caretaker as she mentally declines.

There’s no doubt this will be a difficult road for both of them, but I believed Miguel when he reassured her he was in this for in sickness and in health. He adores Rebecca and, no matter how it appears in that flash-forward, I think Miguel will be by her side until the end.

Laura: I believe he’ll be there until the end or until one of them dies (if he dies first.).

Jack: I also think Miguel is 100% committed to Rebecca until the end. It’s going to be devastatingly hard for him as the disease progresses, especially when it gets to the point that Rebecca doesn’t recognize him anymore.

Were you surprised by the bittersweet ending for Nicky and Sally?

Christine: No. The odds of finding Sally still single and pining for Nicky were very slim.

At one point, I wondered if she might end up leaving her husband for Nicky, but the ending with Sally reevaluating her life was more realistic for both of them.

Laura: While I’m a hopeless romantic and would have loved to see them reunite, it wouldn’t have been realistic. I also wondered if she might leave her husband for Nicky, but I’m okay with how it ended.

Jack: I’m with you in the hopeless romantic department, Laura! I love second chance romances. But it wouldn’t have been realistic for Sally to have also been pining for Nicky for 50 years.

I think this was beautiful closure for Nicky, and I’m excited to learn how his relationship with Edie develops now.

Deja seems to have bonded with Malik’s toddler daughter. Is this a good idea, or will it be problematic later on?

Christine: Well, she and Malik have been dating for quite a while now, so Janelle may just see her as one of Daddy’s friends.

Clearly, the little girl was thrilled to see Deja, but she can’t see much of her with Malik in Boston.

But there’s always the risk of a child getting too attached and then the couple breaking up, so let’s hope Malik and Deja are careful concerning Janelle’s feelings as they move forward.

Laura: Deja and Malik have been dating for two years, I think, so I’m sure Janelle has developed a relationship with her.

With that said, I agree with Christine that kids that age are vulnerable, so they should proceed with caution.

Jack: That’s my only concern as well.

With Malik and Deja’s relationship being mostly long-distance right now, Janelle doesn’t have much of a chance to get attached to Deja. Still, there’s also the risk that the distance will kill Deja and Malik’s relationship.

And I don’t trust Jennifer not to try to throw monkey wrenches into Malik and Deja’s relationship, either.

Hopefully, it won’t be traumatic for Janelle if either of those things happens.

Christine: For someone who wasn’t in her daughter’s life until recently, Jennifer certainly had no problem bossing Malik around like he wasn’t the only parent who stepped up and took care of their daughter while she was MIA.

And Jennifer was taking Janelle to see her parents. Where the heck have they been all this time?

Laura: I’m also worried how Malik’s ex will fit into this.

She seemed to be extremely demanding, and Deja already dislikes her. If Deja and Malik stay together, she’ll need to deal with Jennifer, whether she likes to or not.

Jack: I did not like Jennifer at all either. As Christine said, she just reappeared in Janelle’s life after a couple of years and then tried to act like Malik was the one who was the irresponsible parent.

I’m worried she may try to sue Malik for custody or insist he break up with Deja if he wants a relationship with his daughter. Ugh.

What did you think was the most poignant moment on this week’s This Is Us?

Christine: There were two.

Rebecca explaining to Sally how Jack got the “showroom model” while Miguel got the “used classic with a ton of miles” was sadly sweet.

The other was Nicky telling Miguel and Rebecca that he thought Jack would have been happy they found one another. It’s probably something they’ve both wondered about, and Nicky’s words likely meant a lot to both of them.

Laura: I agree with Christine.

I really appreciated the bonding moment between Sally and Rebecca when she admitted that Miguel got that used classic model with lots of miles.

I also loved seeing Miguel and Rebecca taking dance lessons at the end.

Jack: In addition to all of the above, I loved Nicky and Sally’s goodbye.

It meant so much to Nicky that he had once been important to Sally, and he got the closure he deserved. And for just a minute, it seemed like Sally was contemplating the life she might have lived instead. It was just a beautiful, bittersweet moment.

Your turn, This Is Us fanatics! After watching This Is Us online, hit the big, blue SHOW COMMENTS  button and let us know your answers to these questions. And if you missed it, check out our This Is Us Season 6 Episode 2 review.

This Is Us’ final season airs on NBC on Tuesdays at 9 PM EST/PST.