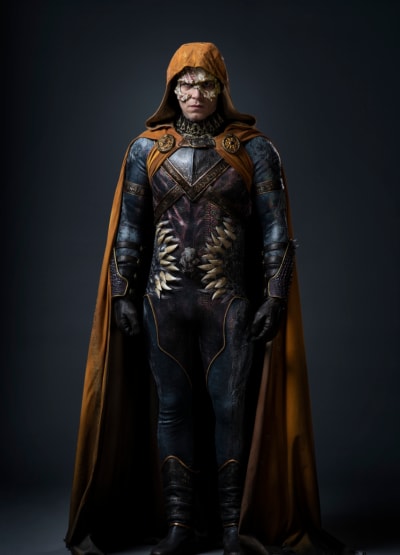 Titans Season 4 is fast approaching, and HBO Max unveiled the first look at some new characters.

As previously reported, Joseph Morgan will debut as Sebastian Blood, aka Brother Blood, in the fourth season.

The first look photo shows Morgan in action as the new villain who will surely cause a lot of problems for the Titans.

Brother Blood is described as an “introverted man with a strong intelligence and a hidden, darker nature.”

Franka Potente is set to play May Bennett, aka Mother Mayhem.

The character is described as a “natural leader who always carries the threat of violence with her.”

“[She is] a predator in human form with an unfettered belief in her mission in the world.”

Described as a “quick-witted criminal longer and a master of dark magic with a joy for manipulating others and creating chaos while doing it.”

The cast also includes Conor Leslie as Donna Troy (aka Wonder Girl), Joshua Orpin as Conner (aka Superboy), and Minka Kelly as Dawn Granger (aka Dove).

Titus Welliver is also joining the cast for Season 4 in the role of Lex Luthor, but details are being kept under wraps about what brings Lex into the narrative.

After the conclusion of Titans Season 3, the team sets off for San Francisco but not before a stop in Metropolis, which finds them “in the crosshairs of a supernatural cult with powers unlike anything they’ve faced before.”

Titans Season 4 is on track for a November bow.

A more definite premiere date will probably come on October 9 when the series arrives at New York Comic-Con.

Your thoughts on the first photos?