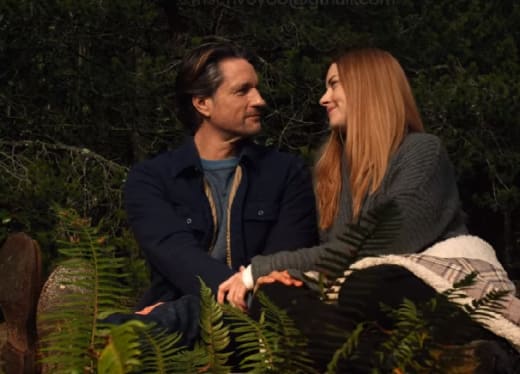 The drama in Virgin River will continue to flow for another few years yet.

Multi-season renewals are unprecedented these days, especially at Netflix, but this shows that the series remains a resounding success for the streamer.

The soapy drama first arrived on the scene in December 2019, with fans waiting 11 months for Virgin River Season 2 (November 2020), but Netflix opted to launch the third season earlier (July 12, 2020), and it boasted some strong results.

Netflix has yet to release official figures for the series, but it topped Nielsen’s U.S. streaming rankings, hitting 2.1 billion minutes viewed one week.

Netflix revealed the following of Season 3 ahead of launch:

“We’ve got even more drama in store for our beloved characters. Highlights include a funeral, a fire, a divorce, a hurricane, and a new romance, in a twist-packed season that’ll keep fans on the edge of their seats.”

If you kept up to speed with Jasmine’s Virgin River reviews, you know the season delivered a lot of drama and left us with a wealth of cliffhangers.

O’Toole had a decreased presence on Virgin River Season 3 due to COVID-19, but there’s a good chance we’ll be seeing a lot more of her character on Season 4, which has actually been in production for several months.

Hope was last seen in the hospital as doctors performed surgery, leaving fans up in arms because there wasn’t nearly enough of the character that season.

We also had Brady being arrested for shooting Jack, even though he is adamant it was someone else entirely.

Then Christopher arrived in the dead of night, breaking into Preacher’s house, but Preacher was away from home after being drugged.

Charmaine told Jack she wanted full custody of the twins, leaving us with yet another cliffhanger.

Yes, we’ve barely scratched the surface. It was a lot.

What are your thoughts on the milestone renewal?

Are you all in on this soapy drama?

Catch up on the first three seasons on Netflix around the globe.

Young Sheldon – Episode 5.05 – Stuffed Animals And A Sweet Southern Syzygy – Press Release
The Conners Season 4 Episode 4 Review: The Wedding of Dan and Louise
New Amsterdam – Episode 4.05 – This Be The Verse – Promo, Promotional Photos + Press Release
Day of the Dead – Season 1 – Open Discussion + Poll
‘Married at First Sight’ star Michaela spoils the fate of her marriage to Zack (SPOILERS)
Follow us on Facebook
Follow us on Twitter