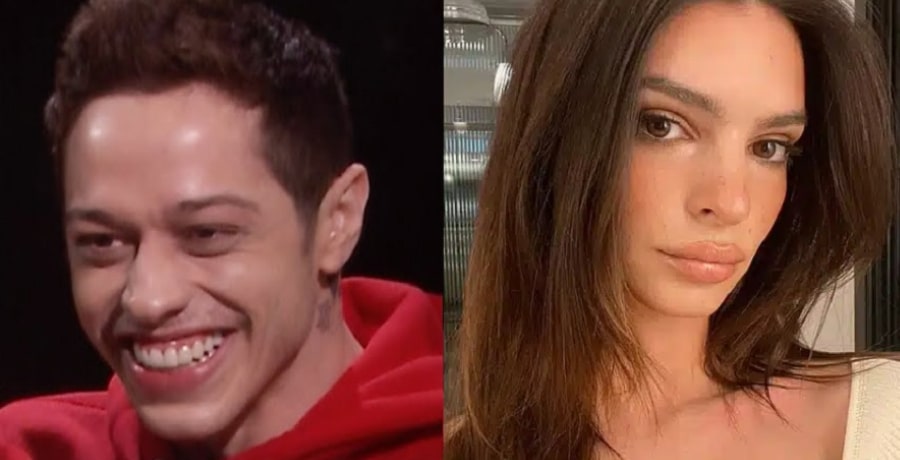 Emily Ratajkowski is sizzling in a slinky and braless dress while telling fans that she was feeling “pretty.”

The supermodel and swimwear designer continues to make headlines for her new romance with Meet Cute actor Pete Davidson, however it was a solo affair as she updated her social media this week. Emily posted to Instagram. She showed off a gorgeous evening look while rocking a braless dress. She also upped the positive vibes via a caption that was kept short and sweet. Emily is further in the news right now for a recent podcast reveal over dropping to only 100 pounds. However, she looked healthy and sensational in her Instagram share.

Emily thrilled her 29 million+ followers by posing close up to begin with. The brunette was outdoors and in a low-cut and gorgeous embellished dress. She opted for peachy pink fabrics and rich golds, also going glam with metallic and bejeweled straps in gold. The mom of one flashed hints of her cleavage via the deep neckline as she cocked her head to the side. Emily also wore her dark locks down and straight with slight bangs framing her face.

The Inamorata founder sported a matte and low-key face of makeup. She opted for foundation and light blush, plus a glossy nude lip to flaunt her plump pout. Fans swiping then saw Emily in her halter number as she showed off a side view. The dress was revealed to have pops of scarlet and pink. In a caption, Emily shouted out Sansho, saying: “Felt pretty last night so I’m posting these.”

Quick to leave a like was supermodel Elsa Hosk.

Emily might afford an air of confidence with her famous bikini photos, but she has revealed a less confident side. “I have days when I literally cannot look in the mirror because I am sick of myself. I don’t like how I look or I want to change certain things about myself. We are stuck inside one body, we can’t see ourselves and we have no perspective on it,” she told Glamour.

Emily is also known for being body-positive and opening up on her mental health. The star is now the talk of the dating world in Hollywood, though. She’s all loved up with new flame and ex to SKIMS founder Kim Kardashian, Pete Davidson.

Mentioning Emily’s recent ex, estranged husband Sebastian Bear Mc-Clard, a Hollywood Life source dished: “Pete and Emily first met when Sebastian and Pete were working on ‘Bodies’ together. It was not strange to see Emily visit Sebastian on set. Pete would make everyone in the film and behind the scenes laugh and it became very familial.”

For now, though, it’s all about that dress!

Let the Right One In: Cancelled, No Season Two for Showtime Horror Series
The Nevers, Raised by Wolves, Westworld, & More Scrapped HBO Max Projects to Stream Free on Roku and Tubi
Nick Offerman Eyed for Role in ‘The Umbrella Academy’ Season 4
Not Dead Yet – Episode 1.03 – Not Out of High School Yet – Press Release
New Indian Movies and Series on Netflix for January 2023
Follow us on Facebook
Follow us on Twitter