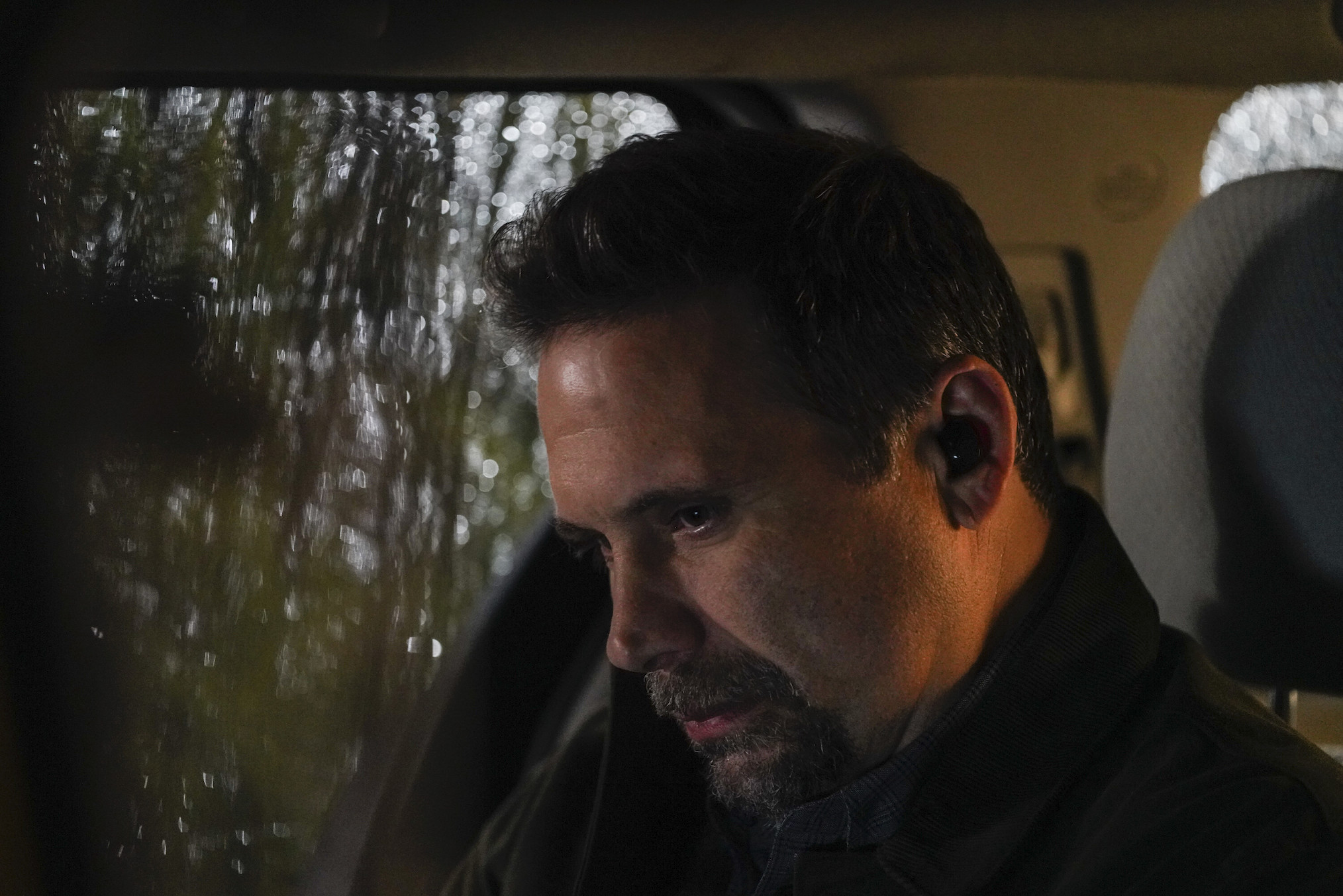 As Jeremy Sisto told us, Assistant Special Agent in Charge Jubal Valentine makes a bad choice in the January 24 episode of FBI.

Jubal’s on his way to work when his ex-wife Samantha (Mara Davi) calls to tell him that their son Tyler (Caleb Reese Paul) has a lump and is going to see a doctor. While he’s been in the clear, there is a concern that his cancer is back. Jubal looked at the vodka bottles on the counter in the store, and yes, he does add some to his coffee, explaining why he’s so upset when someone spills it and defensive when Special Agent Maggie Bell (Missy Peregrym) questions his behavior and asks if he’s been drinking. At one point, he even threatens to have her fired if she questions his authority again.

Jubal then drinks before going to see Tyler, and after Sam reveals that it’s just a cyst, he admits that he slipped. He was scared, he says, and had a horrible feeling. The episode ends with him going to an AA meeting.

Sisto breaks down what he calls Jubal’s “horrible, life-endangering choice.”

Talk about reading the script for this episode and finding out that Jubal drinks again. What was your reaction?

Jeremy Sisto: Our wonderful showrunner Rick Eid was visiting the set, and they were talking about future episodes coming down the pike, and he mentioned this. I was surprised because I thought maybe they would at some point, but I guess in the back of my mind, I thought they weren’t going to because it’s a kind of precarious thing to do. It’s hard to watch a character that you’re supposed to trust really put at risk the one thing that he is really good at, that you’re used to watching him succeed at or at least be talented in, and to watch him make this horrible, life-endangering choice is a tough thing to write, and you really want to find the right balance of he makes this choice because he is overwhelmed.

I thought it was handled really well in the script. I feel like with addicts, you never know what’s gonna throw you off, what’s gonna be that thing. Often, it’s not what you expected it would be. He’s had many times during this whole trauma with his son where he could have fallen off the wagon [like] when his girlfriend got shot in his arms. He’s been through a lot. So the fact that this one test that didn’t even say the cancer was back, it was just something that he needed to get checked out, the fact that that threw him over, I think part of it was that it just caught him off guard. And for whatever reason, on that particular day, he gets a hunch, something that he uses in his work often, and the hunch tells him something really bad is gonna happen even though it’s not there yet. He’s usually much better at controlling his mind, and in this particular situation, he just wasn’t. He let his brain take over, his fears take over, and he made some really bad choices. But even while he was doing that, he stayed cognizant of, “I can’t fire a gun.” Perhaps he had a shot at the bad guy. He didn’t take a shot. He knew he shouldn’t be out there with a weapon; you know what I mean?

And he’s cognizant enough to know that he can never admit it to Maggie because then she would definitely have to go and tell someone. Basically, he didn’t let himself go completely off the rails even as he was drinking. I guess in my mind before I read the script, I was like, “well, once he drinks, it’s gonna be a slosh fest, and he is gonna be in the JOC throwing things around and slurring,’ and of course, that’s not how the story had to play out. It had to play out with much more balanced choices.

Is it a good sign that he went to an AA meeting at the end, or is it like, OK, he’s taking that step, but there’s still this big concern there?

But no, I think he caught it. He didn’t let himself go on a bender. He didn’t give in entirely. He was able to stop himself as he was veering off the road. He was on the side of the road, and there was a bridge ahead that he was heading towards and he pulls himself back just before he goes flying off the edge. And so I think we can be confident going forward that he pulled it back together.

Those conversations with Maggie are some of the episode’s best scenes, so are we going to see anything coming up between them to follow up? They need to talk after that last conversation.

I don’t think so. I think Jubal’s gonna just ignore her for a while because he can’t admit to what it is. He can’t admit that she was right. He can’t even give her that sort of sense that he’s admitted to it because that would put her in a really bad place. She would have to do something, and he just can’t admit it to her. I think they’re both going to pretend it didn’t happen. She’s gonna keep her eyes on him and see if it seems like he pulled it together or not, but once she figures out that, OK, that was a momentary thing, and he pulled it back together, I think they’re both gonna pretend like it didn’t happen. But I don’t know. I’d be interested to see if the writers want to readdress that.

What about anything coming up with Isobel? It seemed like at moments in this episode that she may have known something could be going on.

Yeah, she is very sensitive to the struggle with his son as well. I don’t think she suspected him of drinking. I think it crossed her mind, maybe, but she decided that that’s not what it was. Because if she thought that was what it was, it would be very irresponsible for her not to make a stronger choice as the leader. But I think she got distracted, which was Jubal’s plan, by seeing him dealing with more stuff with Tyler that she was able to just write it off as an emotional response to that.