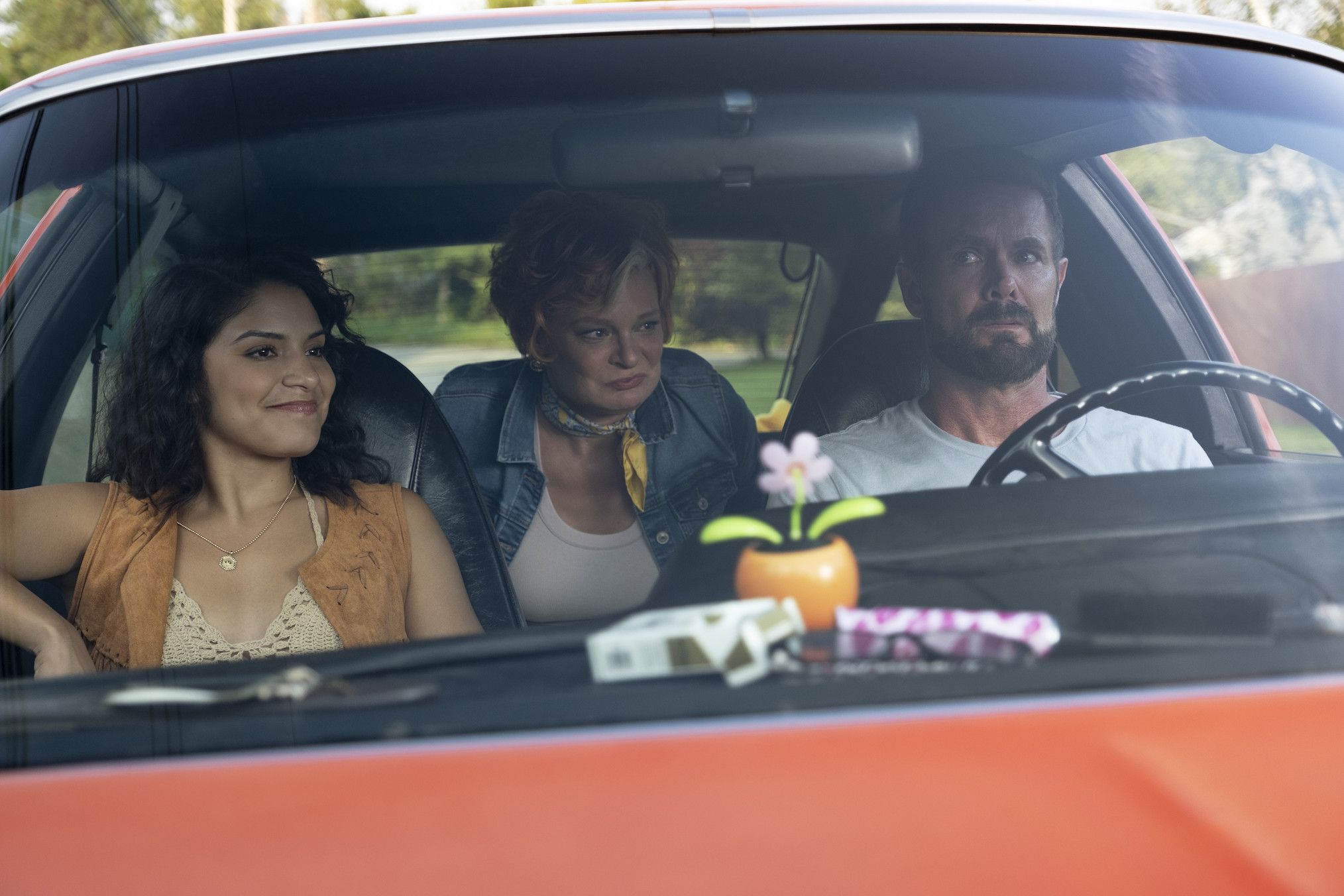 A 26-year prison sentence over marijuana and the COVID pandemic might not sound like the right backdrop for a sitcom. Still, Greg Garcia (My Name Is Earl, Raising Hope) found them to be the perfect elements to bring together for his new program, Sprung. The Amazon Freevee comedy tells the tale of former inmate Jack (Garret Dillahunt) who gets released from his state co-ed prison early and is determined to use his newfound time for good while leading a band of misfits trying to survive in today’s world.

Actually, they’re trying to survive in 2020, specifically. “I wrote Sprung around March of 2020,” Garcia tells TV Insider. “We set the show in that time period because that’s when I wrote it. I had wanted to work with Garret [Dillahunt, who also starred in Raising Hope] again. I had this idea of him playing someone who came out of prison after being held unjustly for a long time for marijuana. When COVID hit and I read that [some jails] were releasing prisoners early I thought I can take that idea and before I knew it, I had a script.”

Dillahunt’s Jack has nowhere to live upon his release, so he ends up staying with ex-cellmate Rooster (Phillip Garcia, Telenovela) and another former prisoner Gloria (Shakira Barreraa, GLOW) at the home of Rooster’s mother, Barb, played by Martha Plimpton (who also starred with him in Raising Hope). The quartet forms an unlikely band of thieves who utilize tips Jack learned during his incarceration to pull off heists.

Part of the show’s humor comes from Jack not knowing about the modern world into which he’s been thrust. “Twenty-six years ago, Jack didn’t have a cell phone and there were no electric cars,” Dillahunt points out. “In prison, there’s one generic brand of Cheerios. Now, he can go to the supermarket and there’s 26.”

Garcia also creates humor out of the early days of the pandemic when people were both hoarding toilet paper and also marking the price up in order to re-sell it. “One thing I said to Greg was that I want to make people laugh,” Dillahunt, who additionally serves as one of Sprung’s executive producers, notes. “Greg nudges political issues, but he doesn’t hit people over the head with them. I appreciate that and I think the audience does, too. We don’t know the political issues of these characters. COVID is just the jumping-off point.”

Watch an exclusive sneak peek at Sprung below:

“None of the humor in Greg’s shows is ever meant to come at anyone’s expense,” Plimpton adds. “He doesn’t mock people and his humor isn’t mean-spirited. The humor comes from a place of humanity, empathy, and understanding that we’re all in the same boat. We’re all just trying to figure it all out. We’re all ultimately after the same thing – being loved, having friends, and taking care of each other. That’s Greg, right there.”

Setting the series in the early days of the pandemic allows Sprung to poke jokes at the hysteria that existed at the time. “You can have a little fun with it – if that doesn’t sound too crazy – with just how naïve we were about certain things,” says Garcia, hastening to add, “The last thing I want to do is make light of this. I know people who have passed away. I know who people who have been [dealing with] tragedies in the last couple of weeks.”

He also adds that the pandemic is the inciting incident “that gets the show started, but it’s not the show. I think you can make certain jokes about things. I hope nobody gets offended. You have to use common sense. Sometimes, we have fun with the fact that they’re naïve. Barb walks into a bank and doesn’t have a mask on, so she covers her mouth.”

Speaking of Barb and Plimpton, the Raising Hope actress wasn’t originally cast in the role. “When I first wrote the character, people who read the script said, ‘Oh, you wrote this for Martha,’” Garcia recalls. “I said, ‘No, she’s not even available.’’ Illeana Douglas (The Skinny) was originally hired to play Barb. When a decision was made to recast the role, Plimpton was available as her HBO Max series Generation didn’t receive a second season order. “We called Martha and asked if she could get on a plane and be here in three days,” Garcia shares. “She said, ‘Absolutely!’”

Reuniting Dillahunt and Plimpton is a win/win, Garcia says. “If you like Raising Hope, you’ll be happy to see these people together again playing different roles,” he says. “If you didn’t ever see it, it doesn’t matter and you’re seeing great actors play these different parts.”

“It was crazy,” Plimpton says as to how quickly her joining the show came about. “To be honest, when I heard that Garret and Greg were doing a TV show together, I was a little peeved. When they did call, I didn’t even have to read the script. I just got on the plane, did the costume fittings, and I was there. I’d follow these guys to the end of the earth. I find them both utterly hilarious.”

Plimpton’s Barb is equally passionate about her son, Rooster. “She’s missed her partner-in-crime,” the actress says. “Now that he’s come home, she couldn’t be more delighted. She’s thrilled to have her son back and she’s not letting him go anywhere now.”

Check out our exclusive clip from Sprung below.