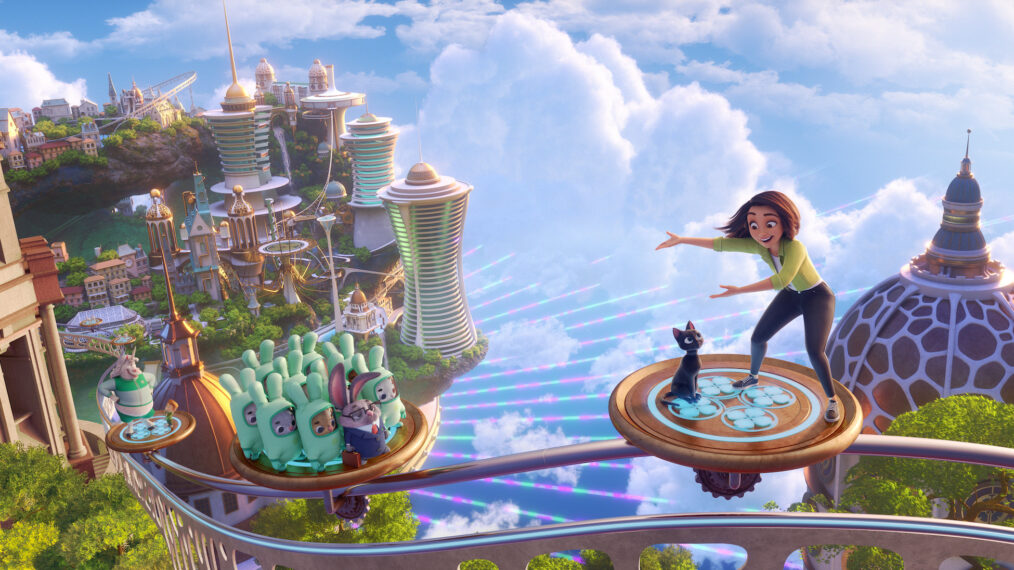 If this animated charmer has the feel of a minor Pixar classic, that could have something to do with the influence of John Lasseter, the executive who left Pixar under a cloud and now runs Skydance Animation. Luck is the story of perpetually hapless Sam (Hadestown’s Eva Noblezada), who stumbles through a portal into the magical Land of Luck, courtesy of a “lucky Scottish black cat” named Bob (Simon Pegg). His wayward lucky penny becomes the catalyst for a boisterous and merrily benign misadventure, where even the “Bad Luck” denizens turn out to be kind of sweet, just unlucky.

Lions, bears and aliens, oh my! The Predator horror franchise takes one of its more unusual and rewarding turns in this suspenseful film set among the Comanche warriors and hunters of the Great Plains in the 1700s. Naru (the compelling Amber Midthunder) is a young tribal woman who yearns to be taken seriously as a hunter, and as genre convention dictates, she gets her chance when she goes up against the mostly invisible and fiendishly fearsome space-alien Predator from another world. The well-armed alien already has its hands full dealing with other predators in the field, most memorably clashing with a big bear. And Naru learns there are other dangerous stalkers out there, when she runs afoul of an ill-fated group of French trappers. The action is sustained, the setting refreshingly different and the scares palpable.

The harrowing final chapter of producer/writer Dennis Lehane’s fact-based prison drama brings undercover inmate Jimmy Keene (Taron Egerton) closer than ever to exposing creepy serial killer Larry Hall’s (Paul Walter Hauser) secrets—until the corrupt prison hierarchy imperils Jimmy’s chances to reach the authorities who put him in this situation. Hauser is chilling and terrifying in his final scenes of rage at his betrayal, and as Jimmy’s ailing dad, Ray Liotta is heartbreaking in one of his final performances.

Once again, the sports network becomes the home for a full 24-hour span to a wide array of offbeat competitions, starting with Corgi Races at Washington State’s Emerald Downs and continuing with 14½ hours of live coverage from South Carolina including the World Axe Throwing League, AWA Wiffle Ball, Pogopalooza Cup 2022, the USA Dodgeball All-Star Showcase and the American Cornhole League’s SuperHole III event, with finals airing at 8 pm/ET. (Celebrities participating include Doug Flutie, Mike “The Situation” Sorrentino and ESPN/SEC Network’s Marty Smith, who co-hosts The Ocho Show live with Ryan McGee at 2 pm/ET). New sports to this year’s The Ocho include pickleball, belt sander and bed races. In other words, something for everyone.

There have been many attempts to film Neil Gaiman’s 1989-96 epic dark fantasy comic-book series of mythology, gods and nightmares. Netflix has finally stepped up with a lavish 10-part adaptation, starring Tom Sturridge as Dream aka The Sandman aka Lord of Dreams, who as the series opens has spent the last century imprisoned by an occultist (Game of Thrones’ Charles Dance). Now he’s on a journey across worlds and timelines to remedy the chaos that ensued during his absence. Notable co-stars include Thrones’ Gwendoline Christie as Lucifer Morningstar and Mark Hamill voicing gourd-headed janitor Mervyn Pumpkinhead.