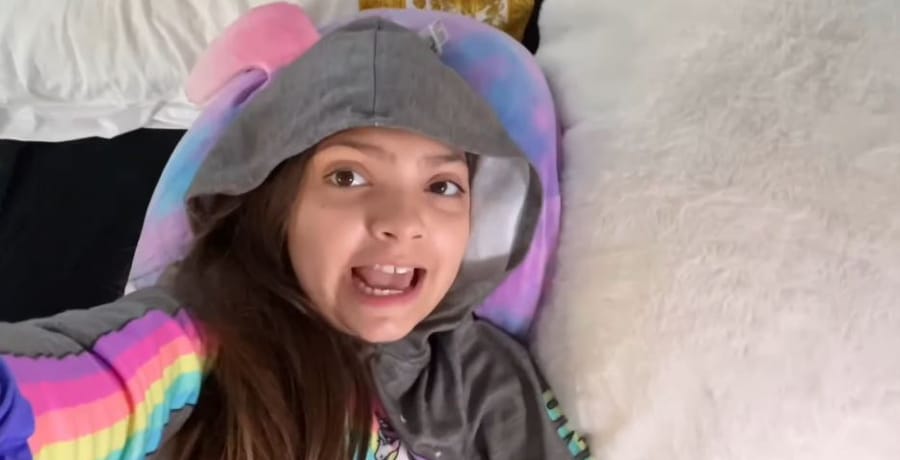 After Teen Mom Farrah Abraham was slammed for clubbing with her 13-year-old daughter, she revealed that it was nothing but a fun-filled concert. Now, the Teen Mom star is receiving praises for being an understanding and cool mom. Her teen daughter, Sophia Abraham, recently flaunted her new boyfriend on TikTok and gained much support and praise from fans.

On Monday, Sophia shared an adorable video of her & her unnamed beau on Tiktok as she made a Build-a-Bear. Although the clip only showed a quick, shaky glance at the mystery man’s face, his long red hair fell to his shoulder. As per The Sun, he appears to be a bit taller than Sophia & looks to be around the same age group.

In the video, Sophia’s new beau echoed her love for dark clothing as he wore an all-black shirt along with matching khaki pants. Sophia wore an all-black ensemble with heavy black platform shoes that made her look taller. The teen smiled & laughed throughout the trip as the new couple sweetly added a stuffed heart to their new pet.

The New Teen Couple Dresses Up In All-Black

Adhering to their all-black theme, the couple settled on stuffing a cute Toothless dragon from DreamWorks animation’s How To Train Your Dragon movie. The TikTok video was captioned, “He got me a build a bear plushie,” which was followed by three heart emojis.

Fans took to Reddit to applaud the new couple. One commented, “Aw, this is cute! I’m happy for her. Sophia seems like a sweet kid.”

“I like Sophia. She seems to be the opposite of her mother, which is a good thing. I also love her style. It’s cute that she and her boyfriend went to build a bear. It reminds me of dating at that age,” chimed in another.

A third praised Farrah’s flexibility regarding her daughter’s dating life. They commented, “I am happy to see that Sophia is allowed to express herself and find her own style. I’m pleasantly surprised that Farrah supports it. It’s one thing I can see that Farrah has done right.”

This is actually a one-off incident where Farrah got praises for her parenting skills. Teen Mom fans haven’t shied away from bashing the Teen Mom alum. As mentioned earlier, the 31-year-old was partying with her teen daughter at an 18+ club. The mother-daughter duo danced at The Empire Control Room, which is a club located in Texas, on July 18.

However, the reality star revealed that it was an ‘all ages’ concert, and she accompanied her daughter thinking it would be safer for her. Currently, the mother of one has been working through a 12-step program for substance abuse. She believes it will help her with everything in her life, including parenting.

What do you think of Sophia’s new beau? Share your thoughts in the comments!