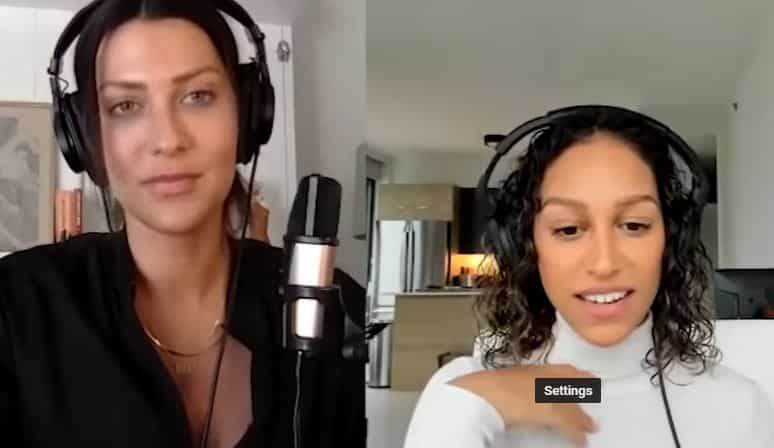 On Bachelor Happy Hour this week Serena Pitt and Becca Kufrin discussed all things going on in The Bachelorette world. Both Bachelorettes dealt with a little drama on their dates some good, some bad. The two friends talked about it all and shared some of their own experiences they felt were similar.

First up they talked about one of Rachel’s top runners, Tino Martinez. They said he spiraled a little and Becca said how he, “was processing the situation kind of rubbed me the wrong way.” Serena said while she understood it was an intense time being so close to Hometowns, he handled it wrong. Read on to say what else they had to say about Tino and Gabby’s date in a racy part of Amsterdam.

Serena Pitt and Becca Kufrin didn’t hold back on their thoughts. According to Bachelor Nation, Serena said she totally laughed when Ethan said, “Tino’s being a baby back b***h right now.” Tino got upset when he didn’t get Rachel’s rose on the group date.

Pitt said there was a moment where she felt the same as Tino did during her time on Matt James’s season. She felt bad when she didn’t get the group date rose and needed validation. She reiterated the way Tino handled it was poor. Serena said she hopes he didn’t mean what he said about deserving the rose because he said the right thing. She said, “it’s not about saying the right things.”

Becca agreed and she said that’s why his comments rubbed her the wrong way as well. Pitt said she could be in love with him but still give someone else a rose because there are other connections to explore.

What Did They Think Of Gabby’s Date?

Serena Pitt and Becca Kufrin also talked about Gabby’s date in the red-light district of Amsterdam and how they felt about it. Serena said, “I wanted to hate it, but I loved it. I thought it was hysterical.” She said it was funny when they were coming up with their safe words and getting extra flustered.

Becca said her fiancé Thomas Jacobs walked into the room during the group date scene. He was surprised Gabby was whipping them. Becca asked Serena what her safe word would be if she had one. She said she would take it from one of her favorite movies Sleeping With Other People where their joking safe word is mouse trap. She said, “it’s so violent — there’s nothing sexy about a mouse trap.”

Becca said she wishes she could have had a date where she got to whip men. What do you think about Tino’s reaction to not getting the group rose? How do you feel about Gabby whipping men? Comment with your thoughts down below.

Emily Walker is an office manager, momma, ghostwriter and unicorn enthusiast. She lives in the beautiful NC mountains and writes paranormal romance and sci-fi in her spare time.