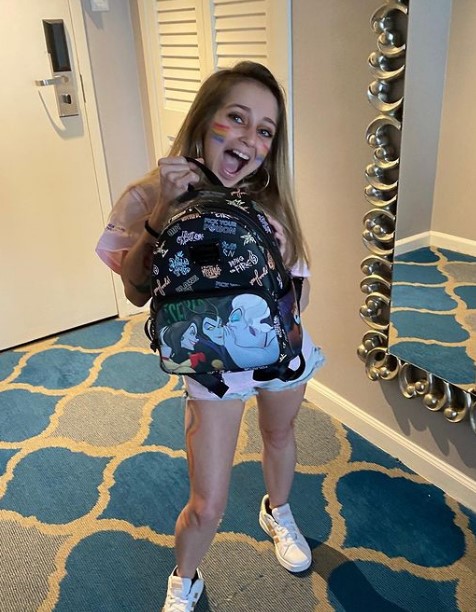 TLC viewers absolutely love Shauna Rae. The 23-year-old is smart, spunky, and always looking for a good time. However, due to medical conditions, she appears much younger than her actual age.

On I Am Shauna Rae, viewers watch the show’s star look for love and do other things that other women her age like to do. Fans even got to see her try blind dating in Season 1.

Shauna doesn’t appear to have a boyfriend right now, but she has been in love before. Keep reading to find out more about the TLC star’s “first love.”

Shauna Rae shares her very first love with her followers

Blind dating didn’t exactly work out for Shauna Rae during the show’s first season. But she seemed eager to keep trying until she found a love match. Most people can easily recall the first time they fell in love. Shauna just fell in love much sooner than most people do.

The TLC star shared a cute photo with her Instagram followers.

“Can you guys tell from this photo who my first crush was as a kid?! 🐒🐅”

In the photo, she’s giving a big hug to a man dressed as Aladdin from the 1992 animated Disney film.

Many of her followers remarked that it was a very cute photo. Some even revealed that Aladdin was their first crush too.

Of course, those who know Shauna know this isn’t a huge surprise. The TLC star absolutely loves Disney. Her older sister Tara even gave her a Disney villains backpack for her 23rd birthday.

Perhaps in the show’s second season, fans will get to see Shauna fall in love for real. He might not be Aladdin, but maybe he will get Shauna to fall for him too.

TLC confirms the show will come back for another season

The good news is that I Am Shauna Rae is definitely coming back to TLC sometime in the future. The family confirmed that TLC greenlit the show for another season. Fans that want to keep up with Shauna, Rylee, Tara, and the rest of the family will soon be able to do so.

However, the network didn’t exactly say when they planned to air new episodes. It isn’t currently known when filming started or stopped. It’s entirely possible that TLC is still actually filming.

But rest assured, TV Shows Ace will post new information about Season 2 as soon as it becomes available. More than likely, fans can expect to see new episodes in late 2022 or even early 2023.

Interested in keeping up with Shauna Rae and the rest of her family? Follow TV Shows Ace online for the latest information. There’s always a new story to share about the TLC star.

POLL : What are you watching Tonight? – 15th August 2022
‘Grantchester’s Tom Brittney on That Surprising Finale: ‘We Had as Much Secrecy as Marvel’
‘Meet Cute’: First Look at Kaley Cuoco & Pete Davidson’s Love Story With a Twist (PHOTOS)
Terry Crews on the Thin Line Between Horror & Comedy, Tales of The Walking Dead, & More
The Daily SpoilerTV Community Open Discussion Thread – 16th August 2022
Follow us on Facebook
Follow us on Twitter