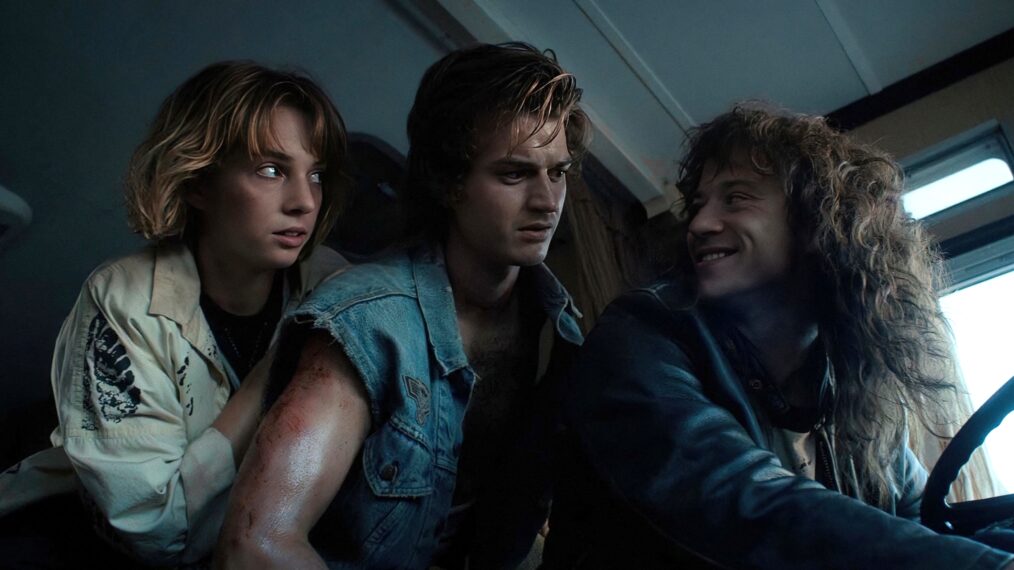 [Warning: The below contains MAJOR spoilers for Stranger Things Season 4 Episodes 8 “Papa” and 9 “The Piggyback.”]

One of the biggest questions leading into Stranger Things 4 Volume 2 was whether fan-favorite Steve Harrington (Joe Keery) would survive or not.

The simple and quick answer is: yes. Steve did survive an adventure to the Upside Down where he, Nancy (Natalia Dyer), and Robin (Maya Hawke) managed to severely wound baddie Vecna (Jamie Campbell Bower). But their mission wasn’t completed without some hurdles as they became entangled in the dimension’s hive mind-controlled vines on their way to the Creel House’s attic. Along with these literal close calls, some of the conversations Steve had in the final two episodes of Season 4 suggested that his fate was up in the air. Anytime a character discusses their plans or wishes for the future, it’s usually a bad sign.

In Episode 8, “Chapter 8: Papa,” Steve tells Nancy he always envisioned a life where he was married with multiple children with whom he’d take RV road trips. He later reveals to Nancy that the person he envisioned this life with was her. A conversation like this doesn’t usually bode well for the characters having it.

A perfect example of plans for the future being interrupted by a dark twist of events is Lucas (Caleb McLaughlin) and Max’s (Sadie Sink) movie night being disrupted by Vecna’s attack on her in the finale. Max dies before Eleven (Millie Bobby Brown) manages to somewhat revive her, but her future remains in limbo as she’s hooked up to monitors and machines in the hospital, limbs broken from the monstrous Vecna’s powers.

While talking about the future wasn’t a nail in Steve’s coffin, we can’t help but wonder if he’ll make it out of the series alive by the time Season 5 arrives. Initially introduced as Nancy’s popular boyfriend in Season 1, Steve has gone from jealous jock to protective babysitter over the course of the series. His lovable onscreen presence is something fans have made clear they never want to part with, but is that enough to save him?

If Stranger Things has proven anything over the course of its four-season run, it’s that no one is safe when it comes to the evils found in Hawkins. Could Steve be the next casualty? Let us know your thoughts on where Season 5 might take the beloved character, and catch him in the latest Season 4 episodes which dropped July 1 on Netflix.

Garret Dillahunt Previews the Deal His Character Makes in ‘Sprung’
11 (Potential) New Couples We’re Most Excited for in the 2022-2023 Season
Days of Our Lives Round Table Week of 8-08-22: Are You Team JEric or Team Ericole?
‘The Bachelorette’: Why Logan Palmer Is Forced To Go Home Week 6
She-Hulk – Season 1 – Open Discussion + Poll
Follow us on Facebook
Follow us on Twitter