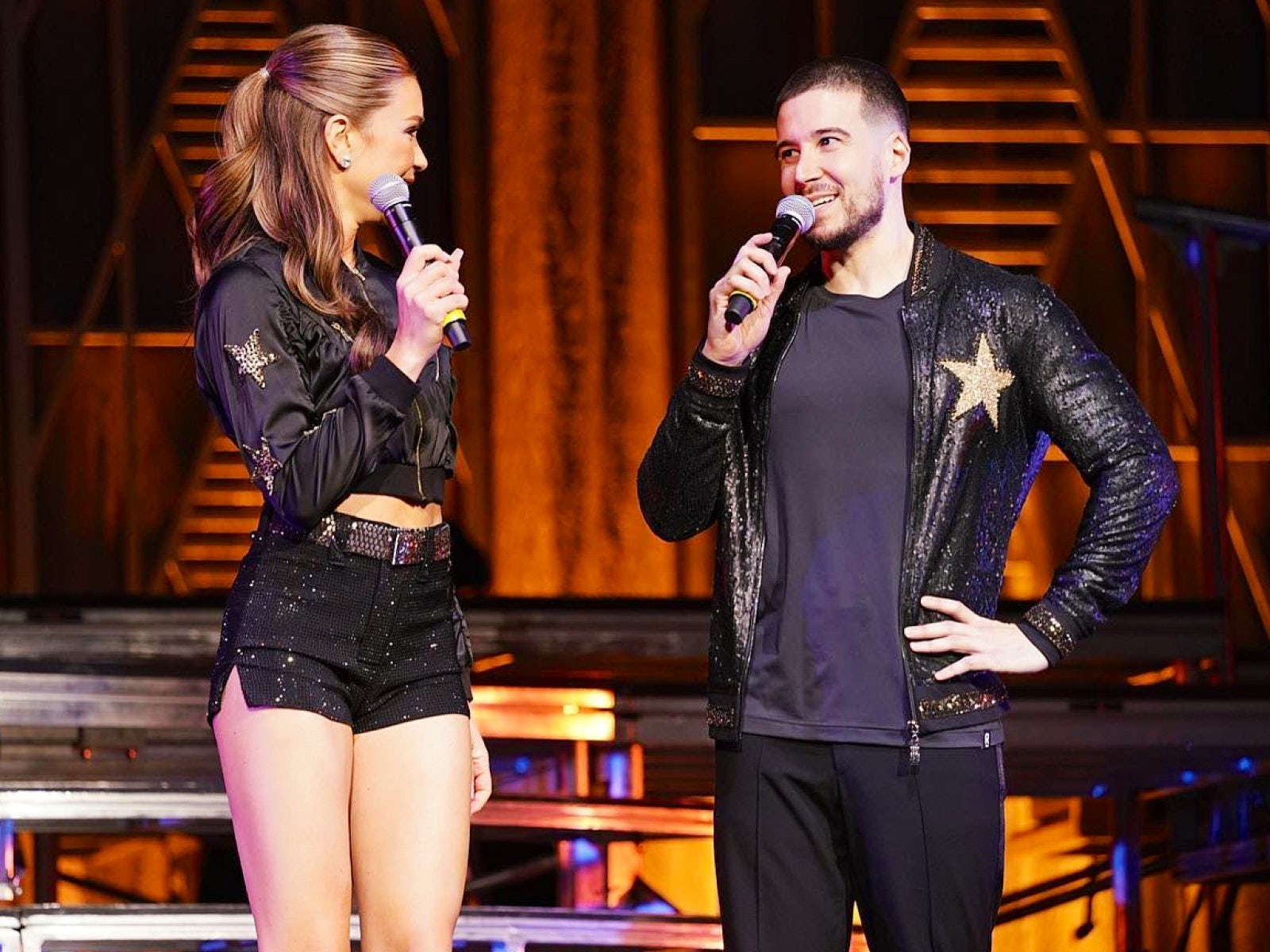 The Jersey Shore star and Gabby, who met while competing on Dancing with the Stars’ 31st season last year, reunited for the show’s 2023 tour earlier this month following more than a month of flirty social-media banter, which began in November and sparked speculation the two reality TV stars are romantically interested in each other.

Gabby — who has repeatedly voiced to the press that she’d “of course” go on a date with Vinny if he formally asked her out — took to Instagram on Friday and posted a slideshow of photos from her experience on the tour, two of which included Vinny.

Fellow Season 31 Dancing with the Stars contestant Jessie James Decker commented on the post, “Dancing with your honey @vinnyguadagnino. Can’t wait to double date in Nash.”

Since Jessie was suggesting a double date with her husband Eric Decker, many fans interpreted the comment to mean Gabby and Vinny have officially begun dating.

But Vinny, 35, clarified to Us Weekly that he and the Season 19 The Bachelorette star are not an item.

“It takes a lot more for me than just, like, a couple Instagram comments to be dating someone,” Vinny explained while promoting the new season of Jersey Shore: Family Vacation.

“But I would go on a double date with her and Jessie and her husband. I would actually go to dinner with Gabby. It’s just that we just met, you know what I mean? It’s not like anything serious.”

Vinny, however, gushed about how he has “great chemistry” with the 32-year-old former ICU nurse and NFL cheerleader.

“We’re both, like, comedians. So, that’s why we get along and that’s also why we flirt so much on Instagram because we have that same banter with each other,” Vinny shared.

Gabby told Us earlier this month that she and Vinny “built a good friendship” while on Dancing with the Stars and “naturally kind of clicked.”

Gabby said she and Vinny initially just enjoyed stirring the pot and teasing fans with their flirtation but then the idea of dating the Jersey Shore star became a real “possibility” for her.

“I think both of our senses of humor are similar, so [we are] just, like, flirting in the comments [and] seeing where things go,” Gabby shared late last year.

Gabby revealed in December that she’d “of course” go on a date with Vinny, whom she also called her “celebrity crush,” but he’d need to be the one to make a move and ask her out.

“You guys need to ask him [how he feels]. He’s so dead to me because he hasn’t been doing any press and I have,” Gabby joked at the time. “I’m, like, dealing with all these questions. But he’s the one who started it.”

In November, for instance, Vinny playfully dubbed Gabby his “Baby mamma” on social media, and she in turn called him, “My main man.”

Gabby also called Vinny a “ten” on Instagram and he quipped in reply about how she needed to stop talking about herself.

Fans of Gabby and Vinny have been shipping them as a couple for more than two months month now.

“That’s kind of been the craziest part about it is, like, how much other people love it,” Gabby told Us in December. “And they know we’re just messing around and they don’t even care.”

Gabby noted the reaction has been “fun to watch” and it “feels good” to know that people have been rooting for them to be together and to be “happy.”

Gabby got engaged to Erich Schwer on The Bachelorette’s Season 19 finale, which aired in September 2022, but they called off their engagement less than two months later.

News of Gabby and Erich’s split surfaced on November 4, and then Gabby revealed on Dancing with the Stars later that month how she and her former fiance weren’t “in sync” or “the best match” for each other.

Gabby told the magazine that she and Erich weren’t compatible once they started their lives together in the real world after being in The Bachelorette bubble.

While Gabby clearly has an eye on Vinny, she previously admitted that she doesn’t “know” if they’d be “compatible” either.

“I truly don’t know that much about him,” Gabby admitted.

“I was, like, so tunnel vision during the competition. You don’t really spend that much time with the other celebrities. But, you know, there’s only one way to find out!”

Vinny and his pro partner Koko Iwasaki were eliminated before the show’s semifinals round.

Gabby, who also briefly dated The Bachelorette alums Dean Unglert and Blake Horstmann before her stint on The Bachelor’s 26th season starring Clayton Echard, has been wanting a commitment from a man who will love her unconditionally.

Gabby said her stint on Dancing with the Stars was therapeutic for her as she dealt with her split from Erich.

As for Vinny, Jersey Shore fans probably remember that he hooked up with Nicole “Snooki” Polizzi and Angelina Pivarnick. He also dated Instagram model Elicea Shyann from 2017-2018.

In 2019, Vinny and his Jersey Shore co-star Paul “Pauly D” DelVecchio looked for love on Double Shot at Love, but a lasting relationship didn’t come from the show.

Vinny also dated Too Hot to Handle star Francesca Farago in 2020, according to Life & Style.

When asked if he’d like to get married and have kids, Vinny told In Touch Weekly in June 2021, “I would never just settle down just to settle down. It would have to be for the right one.”