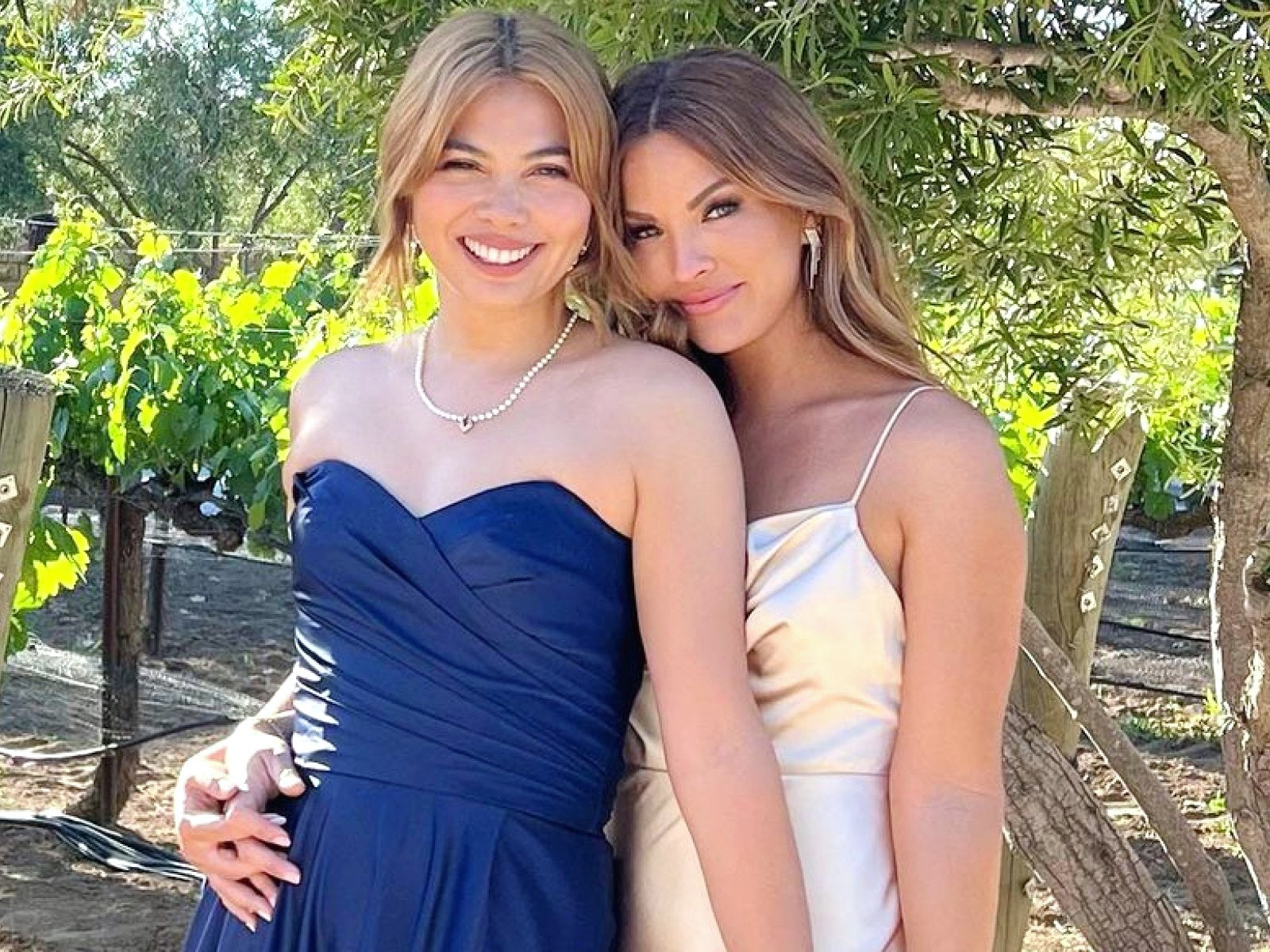 The Bachelor alum Becca Tilley has revealed she wasn’t attracted to women before she began dating singer Hayley Kiyoko four years ago.

Becca, 33, finally confirmed she’s in a relationship with Hayley late last week after dating for four years, and now she seems thankful and relieved to be a proud member of the LGBTQ+ community.

“Leading up to this point, I was like, ‘Oh, my gosh, I’m gonna have to address, like, my sexuality, my label. I’ve never connected with that.’ And I think my story is different from other people,” Becca said on Monday’s episode of her “Scrubbing In with Becca Tilley & Tanya Rad” podcast, according to Us Weekly.

But both of Becca’s sisters are lesbians, with Becca noting that they’ve “never had that attraction to men” and are “very confident” in who they are.

“This isn’t something, like, I personally navigated my whole life. When I look back at things, like — I loved Kate Winslet and [Leonardo DiCaprio] in Titanic and I loved Joey and Pacey in Dawson’s Creek, you know?… When I met Hayley, that was the first time I had that specifically for a woman.”

Becca introduced her romance with Hayley to the world on Friday by tweeting “3rd time’s a charm” and posting an Instagram video of their sweet moments together over the years, which she captioned, “Hard to say if this is a hard or soft launch, but it is a launch.”

Hayley, who is very open about her sexuality, replied in the Instagram comments, “The best four years ever. I love you Becca.”

On her podcast, Becca admitted she was the first one to make a move, which jump-started her romance with Hayley.

“The night we met she was like, ‘Is Becca into girls?’ And [our friend] was like, ‘No, but her sister is.’ We were really pushing to set her up with my sister,” Becca shared.

Becca said she never worried about being “rejected” by Hayley because she already knew that the singer was into her.

“We had been drinking. It’s, like, 2AM at this point. And we went back to [our friend’s] house, and everyone was, like, walking down the stairs. And I actually, I pulled her back, and I kissed her,” Becca revealed.

“And she still says to this day, ‘I never would have made the first move, like, there’s just no way.'”

Hayley left for a tour shortly after their first kiss and Becca said they dated long-distance for the first year of their relationship.

Despite being apart, Becca said they “fell in love so fast,” according to Us.

“I would fly out to, you know, different tour destinations… I think the longest was the month she went on her European tour. But we tried to see each other, like, every two weeks,” Becca explained.

The first person who found out about the couple’s relationship — outside of Becca’s family and friends — was superstar Taylor Swift.

“Because I flew out for Hayley [when she] went on stage with her in Boston and after the show, I got to meet Taylor in her dressing room… When I was thinking about it, I was, like, ‘I think that was the first person who knew other than my friends and family’… It felt like talking to a friend,” Becca recalled.

Becca going Instagram official with Hayley came only hours after Becca kissed Hayley onstage in front of an audience at a party held in West Hollywood, CA, on Thursday.

“It was Hayley’s night but it became Becca’s night too because she came out publicly with the kiss,” a source told Us last week.

Becca and Hayley were celebrating the release of the singer’s new “For the Girls” music video, which was released on Friday and is the first single from Hayley’s upcoming album, Panorama, out this summer.

The “For the Girls” video is a spoof of The Bachelor franchise, showing Hayley as the lead meeting a lineup of women with crazy limo entrances outside of a mansion.

The video ends with Becca stepping out of a limo in a gold off-the-shoulder dress with a high slit and smiling at the musician.

“So I was prepared for anything and everything, but I was not prepared for the amount of love and support that we got,” Becca gushed on her podcast.

Becca reportedly got emotional as she spoke and continued, “Hayley has really made me feel brave, and she was always like, ‘People love you and they want to see you happy.'”

“I’ve always said, ‘I’ll go public — we can go public if I can be in one of your videos, like, be the video girl.’ And I’m not an actress and she always hires actors, like, legit actresses. And so [Hayley] was always like, ‘Okay.'”

Becca said she realized she was ready and finally determined, “I think it’s time,” adding, “For four years, you know, it’s been our relationship.”

Becca insisted she never intended to keep her romance with Hayley a “secret.” Instead, Becca just wanted a “private” romance kept off of social media.

“We were very much ourselves. We held hands in public. We kiss. If I met someone… I introduce her [as] my girlfriend, Hayley. I never was like, ‘This is my friend or my best friend,'” Becca clarified.

“I really made an effort to make sure that there was that distinction between private and secret.”

Becca even introduced Hayley as “my girlfriend” at Ben Higgins’ November 2021 wedding to Jessica Clark as well as JoJo Fletcher’s wedding to Jordan Rodgers earlier this month.

“Everyone was so warm and kind to her that I knew, like, even people I’m not like super close with, they would still be supportive,” Becca noted.

Becca, however, admitted the “girlfriend” label can get a little complicated sometimes.

“My whole, like, four years of dating Hayley has been like, ‘Hi, this is my girlfriend, Hayley.’ And then, like, five minutes later, the person’s like, ‘So are you dating anybody?’ And I’m like, ‘Yeah, girlfriend. This is my girlfriend romantically,'” Becca shared.

“I’ve had to do that my whole relationship because and I’ve never been offended by it. I just think it’s funny because it’s like, you know, I make an effort to be like, ‘My girlfriend.'”

RELATED LINK: ’90 DAY FIANCE’ COUPLES NOW: WHO IS STILL TOGETHER? WHO HAS SPLIT? WHERE ARE THEY NOW? (PHOTOS)

Rumors that Becca and Hayley were dating have circulated online for years, however neither woman had ever publicly confirmed the relationship before now.

Becca and Hayley were photographed together at NYLON’s Annual Young Hollywood party in May 2018, People reported, and that same year, Becca confirmed she was off the market.

Becca then revealed on her podcast in 2019 that she was “in love” with someone, and she subsequently admitted to Us in September of that year that she wanted to keep her relationship “private” and all her “own.”

“I had a public relationship before and it just felt like I had a lot of people involved, which I know that’s why they sort of watched me in the first place,” Becca said.

At that time, Becca wasn’t sure when she’d publicly identify her partner. She said she felt protective of her romance and had reasons why she was keeping it under wraps.

“I just feel if the moment comes where I’m like, ‘Oh, I’m just going to say something,’ then I will,” Becca told the magazine. “I’m really happy and I hope to eventually start opening up about it more, but I’m happy with it being private right now.”

In 2019, the Louisiana native said she had yet to introduce her private love to her parents.

“My family lives far away, so my sisters I guess have been introduced, but not the rest of my family,” she told Us in November 2019. “I’m really happy. I’m in a really good place.”

Becca opened up to Entertainment Tonight one month later about how she felt an “instant connection” with her significant other that she couldn’t ignore.

And the chiropractic assistant teased in February 2020 on her podcast how she was “95 percent” sure she’ll marry her partner.

Prior to getting romantically involved with Hayley, Becca competed on Season 19 of The Bachelor starring Chris Soules, which aired in 2015, and finished as the runner-up.

Becca, a self-declared virgin at the time, then attempted to win Ben’s heart on The Bachelor’s 20th season and finished in the Top 5 in 2016.

“It’s fun. We’ve been friends for a long time and it was just a natural progression, and he’s just amazing and been patient with me,” Becca told the magazine that month.

“I need someone that’s patient and willing to deal with me, and he’s been that way. So it’s been fun, it’s been an easy transition.”

But Becca and Robert broke up in May 2017, with Becca later revealing she had been working and traveling too much to be in a committed relationship.

“[The breakup] was more of me just wanting to take this time for myself and focus on me and what I’m doing,” she said in September 2017. “It wasn’t like one of us cheated or there was this bitterness. I still care a lot about him and there’s no hard feelings.”

Becca hoped Robert felt the same way and would say the same thing.