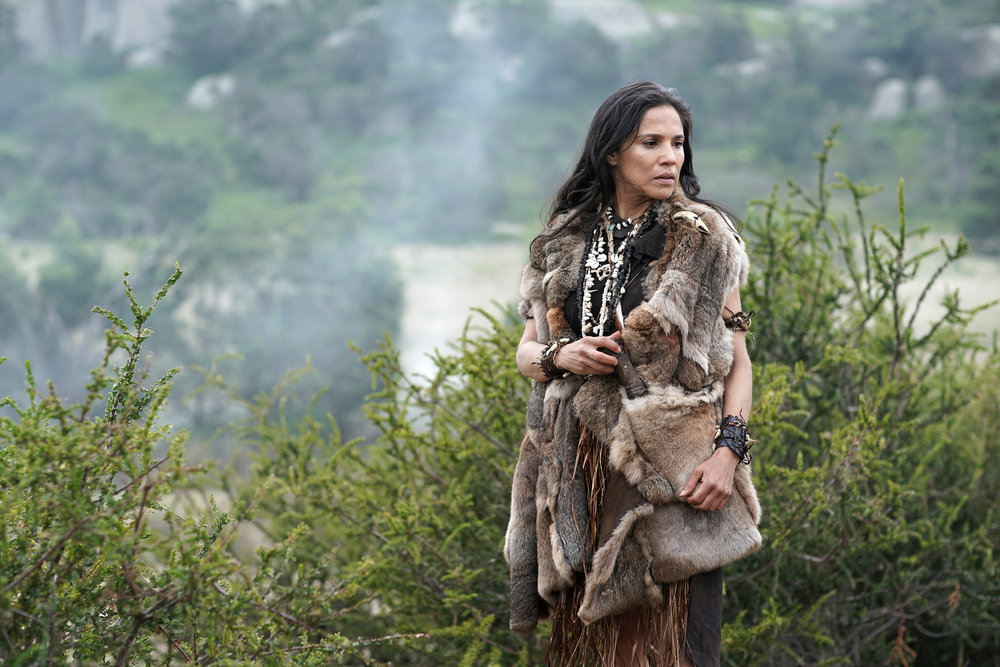 An unexpected snowstorm brought everyone closer together on La Brea Season 1 Episode 7 while redeeming Eve and Mary Beth in the process.

Did they deserve redemption? Yes and no.

While I stand firmly behind the fact that they made poor decisions when it came to sabotaging the “sky people’s” only way to freedom and killing Diana in the process, they definitely didn’t deserve to be banished into the unknown.

Emotions are running high, it’s true, but let’s not forget that they are still stuck in 10,000 BC, which means a lot of risky external factors, including an unexpected storm.

Mary Beth and Eve deserved to be punished, or, at the very least, held accountable for their actions, but they didn’t deserve to be kicked out of the clearing to fend for themselves.

Despite the unfortunate outcome, they both thought that what they were doing was right; They had everyone’s best interests at heart, including Lucas and Josh’s, even if they overstepped and imposed their own fears onto everyone else.

And while they may still be stuck in this time period, at least everyone is safe and sound.

Eve went the extra mile to prove that she was a woman of the people when she risked her life in the storm to save Mary Beth and Lucas after the heavy winds knocked down a utility pole that trapped them under a pile of very heavy rocks and rubble.

Levi encouraged Eve to let it go and get to safety, but she was adamant about staying and pulling them out, even when the situation looked bleak.

Surprisingly, it was Scott who pulled through with the brilliant plan to use dynamite to help rescue them. The idea was courtesy of Lost, which is, well, fitting.

Since they didn’t have dynamite on hand (can you blame them?), Sam rigged a defibrillator to serve as an IED.

Thankfully, it did, so they were able to pull Mary Beth and Lucas to safety.

I wish that they kept that same energy when it came to the plane last week, but I digress. That’s done and in the past!

In addition to Levi, Riley was one of the only other people that vouched for Eve and wanted to give her another chance, which is surprising considering she hated her for abandoning Sam.

Also surprising is the fact that Sam didn’t really stand up for Eve much either. I thought they were in this together!

Riley was able to knock some sense into Josh, who was letting the anger directed towards his mother cloud his judgment. He wanted to hit her where it hurts, which is why he voted her out, but he never actually wanted to banish her at the end of the day. He’s too good of a son to do that.

Riley and Josh almost had a moment while in the rig together. She pulled back, but it’s only a matter of time before she gives in to those emotions.

Her character pushed back against Josh’s advanced initially, but there’s no denying the chemistry these two have… even if he is a freshman!

Their mission didn’t exactly help rescue Mary Beth and Lucas, but they did find a whole truck full of clothes. I was wondering if the series was ever going to address that, and admittedly, it was a very clever way to offer up a wardrobe change!

Those coats will definitely come in handy the next time another Ice Age storm hits.

You would think that with something as intense, it would’ve caused more trouble, but instead, the episode focused largely on character development.

I’m never going to complain about character development, especially when it is so genuine, but it almost feels like the storm was wasted, doesn’t it?

While trapped under the rubble, Mary Beth and Lucas had nothing but time to work out their issues.

This is the first time I’ve actually seen them in a mother and son kind of way.

Under his tough persona, Lucas was just a scared boy that was claustrophobic and needed his mom to help him calm down.

And you know Mary Beth took full advantage of the situation.

She didn’t know if they would survive the ordeal, so she wanted him to know exactly what went down with his father.

And the truth is that while he always considered her the enemy, she only shot his dad because he was on his way to turn Lucas in and frame him for the drug operation.

He was going to let his son rot in jail for the rest of his life while he walked free!

It’s hard to accept that the person you looked up to all these years wasn’t the man you thought he was, but at least now Lucas knows the truth so that he can heal and move on.

I wonder how it’ll change his character journey moving forward.

Scott showed Josh and Riley the gold he found from the American Civil War, but there wasn’t much progress on that front.

Maybe Paara is somehow connected to the discovery?

She really came through for Ty, who would’ve been toast without her.

In the earlier episodes, Ty was ready to sacrifice himself because of his disease, but now, after a few brushes with death, he has become determined to live.

Paara not only saved him from a snake attack, but she also untied him and helped him shelter from the storm.

As they waited it out together, she was nothing but hospitable and admitted that there have been plenty of green light occurrences that have brought in what they refer to as sky people.

Based on previous experiences, she was wary about him at first, however, the two hit it off as Ty proved that he was trustworthy and didn’t mean any harm.

Dare I say these two might even have a romantic connection moving forward?

The good thing is that Ty established a relationship with Paara, which will undoubtedly give us (and those stuck in the 10k BC) many answers.

Speaking of answers — in the present-day, Gavin signed an NDA not to mess with the sinkhole, but that didn’t stop him and Agent Sophia Nathan from investigating his past.

The biggest reveal was that he was adopted. Upon further investigation, he reconnected with the Reverand who saved him 33 years ago and found out that he was taken in while wandering on the side of the road with a 12-year-old girl.

Initially, I thought that the girl — who he doesn’t have any recollection of — might’ve been Aldridge, but when Nathan dug up more information, it was revealed that the girl was actually a local artist named Ella Jones.

When they went to check out her gallery nearby, she wasn’t anywhere to be found, but they did find the same handprint Gavin previously saw in his visions, which means that she’s definitely connected to the mystery and “this place.”

It’s not clear how or why, but it’s intriguing nonetheless.

The scene of the art installation was juxtaposed with Ty asking the native woman what her name was, so it almost seemed like the writers were begging audiences to make the connection.

Sadly, Sophia was also informed of Diana’s passing thanks to Gavin’s visions. However, since he didn’t see what happened (or that Eve was involved), Sophia vowed to stay the course and help Gavin figure out the mystery and bring his family home once and for all.

Since previous sci-fi shows haven’t had the best track record, I’ve been very skeptical about La Brea; I’ve been sort of waiting for the other foot to drop.

But instead, I’m pleasantly surprised that the series keeps getting better and better with each episode.

At this point, with the stakes high, the mystery higher, and answers coming at a promising pace, I’d go as far as to say that it’s one of the best shows to grace our screens this season!

What did you think of the episode?

4400 Season 1 Episode 5 Review: The Way We Were
American Auto – Poster and Key Art
Christian LeBlanc Looks Back on 30 Years as Michael Baldwin on ‘Young and the Restless’
How the Saved by the Bell Revival Honored Dustin Diamond in Season 2
Your Thanksgiving NFL 2021 TV Schedule
Follow us on Facebook
Follow us on Twitter