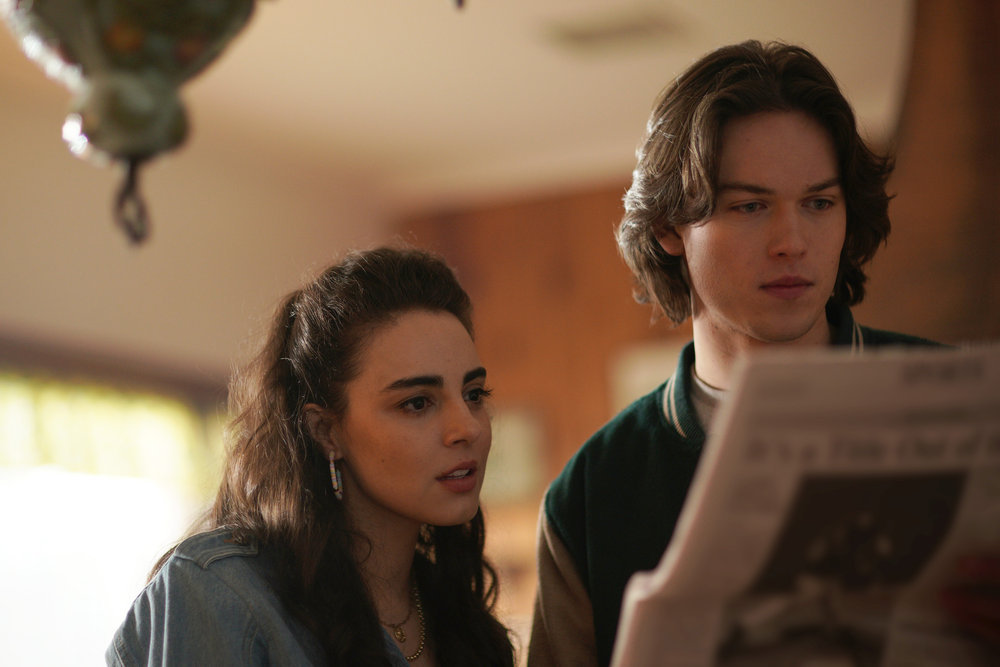 La Brea is one of those shows that I didn’t think would get a second season renewal, but I’m so glad that it did.

With several timelines, there’s so much to explore, though, it seems we might not be sticking around in the present much this season as most of the characters, aside from Riley and Josh (for now) are in 10,000 B.C. It’s like a prehistoric family reunion!

Not only are you hooked by the premise and the mystery of how these characters are going to find a way back home, but there are so many relationships and alliances that draw you in and keep you invested.

As with season 1, you’re going to have to suspend disbelief a bit in order to get fully lost in these worlds and story, but it’s worth it simply to enjoy the wacky adventure of time traveling through sinkholes with a nefarious conspiracy behind them.

The La Brea Season 2 premiere opens with another sinkhole opening up in Los Angeles. And this time, standing on the edge of the Hollywood sign could lead to catastrophe as the iconic tourist spot concaves inward right in front of our very eyes. No one seems to fall victim to the sinkhole this time, thankfully, but it’s a strange occurrence nonetheless and something that isn’t addressed again until the final moments of the episode when Josh and Riley—who are now refueling in the 80s—notice the event on the front page of the newspaper.

Yep, the Hollywood sign sinkhole seemingly opened in 1988, but as Josh and Riley know (since they’re from the future), that never actually happened, which means that something is altering the past. But what could it be? The sinkhole raises plenty of questions, but Josh and Riley don’t have time to focus on them because they have now successfully found a promising way back to 10,000 B.C. And while, yes, they are crazy for wanting to go back to the prehistoric era where there’s no food or electricity, and plenty of carnivorous animals that want to kill them, it’s also understandable considering it’s where their family is.

They could stick around and live a comfortable life in the 1980s, but they are losing their chance of ever returning to the present day. And that’s simply not a chance they are willing to take. By returning back to 10K B.C., they can provide their loved ones with peace of mind and hopefully, if they’re smart, backpacks filled with food and drinks.  Sure, you probably can survive off of mushrooms, but who wants to?

Josh and Riley’s relationship gets slightly complicated, Though it’s not really the best time to discuss romance, Josh is totally smitten with Riley, while she continues to push him away. She explains that she’s just overwhelmed and scared by the situation, which is valid, but she’s also being cautious by acknowledging that they may only be feeling this way towards each other because they’ve been thrown into an unimaginable situation together and have no other choice but to look out for one another. It’s almost like survivor’s guilt. No one else can understand what they are going through, so they cling to each other. There’s potential here for a real relationship, but it cannot stem from fear; it needs to be a genuine attraction.

Out of the plethora of cast members, Riley and Josh are the only two that have managed to escape 10k B.C alongside Isaiah and Lilly, who are on the right path to making sure nothing changes in the future.

Gavin, Emma and Izzy jumped into the sinkhole that opened in Seattle, but since their younger counterparts are no longer in 10K B.C., they’ve lost the connection. They aren’t experiencing any more flashbacks because they are no longer there to have any memories of what happens next.

They are going in blind, which is definitely terrifying. They jumped in partly to save their family, and partly to seek out answers to the world’s biggest mystery. But there’s no denying that they could’ve been better prepared—would it kill them to bring some snacks? They knew the timeline they were going to—they knew there aren’t convenience stores in 10k B.C.

Upon arrival, they realized that it was a huge task to survive in this moment in history, and likely understood just how difficult the time has been for their loved ones. A few days in, and they were hunted by Woolly Rhinos while trying to hunt their own food.

Izzy’s prosthetic leg crack at the most inopportune time, and while she tried to suck it up and push through, it gave out at an even worst time, which almost made them prey to a rhino. Thankfully, they were able to keep on moving, eventually stumbling across the remnants of what would have been the Hollywood sign.

It seems as though despite entering the sinkhole in Seattle, they were somehow dropped in near Los Angeles, which doesn’t really make sense, but it does shorten their journey significantly as they’ve already spotted base camp. It’s a win for them!

Of course, they’ll be quite shocked to learn that Josh is no longer in this timeline while their mother, along with Levi, was captured by a group of dangerous individuals. It’s unclear who they are, but they don’t take kindly to strangers. Lucas, Levi, and Eve were able to rescue Veronica, but in the process, Eve got captured. Once Levi found out, he turned himself over, assuring Eve that he was going to stand by his promise to never leave her again. It’s a brave sacrifice on his part, but I’m not surprised because Levi is in love with Eve. I mean, head over heels, do anything for her, in love. And Eve, well, she’s conflicted. On one hand, she has feelings for Levi, which are likely being intensified by their current situation (much like Riley and Josh’s), but, on the other hand, she still loves her husband. And unbeknownst to her, he’s on his way to save her at this very moment.

It’s kind of hard to even hold anyone accountable for their actions when they are trapped in a prehistoric timeline. Eve doesn’t know if she’ll ever see Gavin again, so naturally, her desire to find comfort in Levi is understandable. But I really cannot wait to see what happens when she sees Gavin in 10K B.C. along with her daughter and realizes that he willingly jumped into a sinkhole to save her.

Gavin and Eve are separated, so her romance with Levi isn’t even technically cheating, but their split also happened because she was tired of the visions he claimed to have. When she can no longer blame those visions for breaking up the family and ruining their marriage, what happens? How does Levi play into all of this?

And why do I still find myself rooting for Levi?

There are two sides to every story, and that couldn’t be more true when it comes to Silas and Dr. Rebecca Aldridge. Both of these characters seem to be speaking in half-truths, which is frustrating. If someone has information about what’s going on here, it would be nice if they were forthcoming with it so that everyone could get on the same page.

Scott accompanied Aldridge on her journey to a literal skyscraper in the middle of nowhere. She informed him that they needed to break into the place in order to save his loved ones, but she was also pretty clear that she was not welcome there. And the moment the people inside laid eyes on her, they would shoot her down.

My guess is that the building belongs to the government and the sinkholes are part of some mission that they worked on alongside Aldridge. Something must have gone wrong, which is why she was iced out. But what’s their game plan? Is everyone really in danger? Or is Aldridge lying?

Silas, who was being held hostage by Sam and friends, finally cracked and told them about the building made of glass and steel that’s 30 stories high in the middle of the woods. He warned them of “dangers there you will not be prepared for” and made it seem as though their only chance to save their kids (Josh and Riley in 1988) was to find Rebecca, who was headed to that building.

But again, why? What’s lurking behind those glass walls? Silas makes it seem like Rebecca Aldridge is the evil enemy behind everything, and for some reason, I believe him. I don’t think that she means well, and I do think she knows exactly what’s going on here and how to escape.

As for Silas, I remain convinced that he is Gavin as an adult, but since Gavin is younger, he doesn’t have access to any of these memories as they haven’t happened to him yet. It’s complex, but I’m convinced that Gavin is the key somehow.

Elsewhere, Sam’s disease is starting to become problematic, but he’s still keeping it a secret and focusing on saving his daughter. Ty and Paraa continue to be the absolute sweetest, and I’m hoping they find a way to reverse his terminal illness. At the very least, I expect him to stay behind and live out his last days with Paaraa and her village.

What did you think of the La Brea Season 2 premiere? Let us know! Is there anything you hope to see this season?