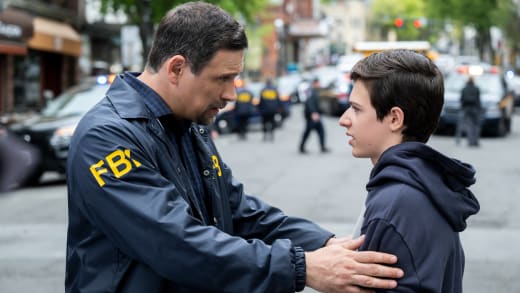 It’s a miracle that CBS managed to find an appropriate time to air an episode on this topic.

A couple of loners contemplating a school shooting was at the heart of FBI Season 5 Episode 3.

It had been scheduled to be the FBI Season 4 finale but got postponed following the May shooting at the elementary school in Uvalde, Texas, that left 21 dead.

Since there have been no mass school shootings in the past month, now is as good a time as any to air it.

Fortunately, this storyline ended up with the team tracking only a potential school shooter.

Instead, this was more about Jubal, the absentee father.

Sadly, this didn’t even feel that out of order. Tyler struggled on FBI Season 5 Episode 1 when work caused Jubal to miss Tyler’s birthday party.

Tyler was still struggling in this episode, the events of which happened earlier than in the one mentioned above.

So, despite all the peril that Tyler faced now and Jubal swearing to do better, little had changed by FBI Season 5 Episode 1.

Work is always going to come first for Jubal. That, and his affair with Rina, were the two significant factors in his divorce from Samantha.

Jubal seemed magnanimous when he went along with Samantha’s plan to move Tyler and Abigail to the burbs in Scarsdale. But things just haven’t worked out that well.

Being a teenager is hard enough. Add to that being the boy that’s recovering from cancer. So Tyler has had a rough transition adjusting to his new prep school.

But a workaholic like Jubal moving his kids a half-hour away was asking for trouble. I mean, he couldn’t find the time for them when they lived in the same city.

Jubal needs to give more weight to Samantha’s concerns about Tyler rather than just brushing her off with the “boys will be boys” defense. She is the one who is with Tyler every day.

Jubal was there for Tyler when he was sick. But he’s got to show up day to day. Tyler taking his mother’s last name should have been a wake-up call.

Sure, Jubal does essential work. But if his son being held hostage by an armed wannabe school shooter doesn’t get him to change his ways, what will?

Maybe it will have to be a cumulative thing, and there will be a turning point. Or maybe Jubal just wakes up one day and realizes he doesn’t know his son.

With two of the first three episodes of the season Jubal-centric, don’t expect that revelation to come anytime soon.

The only part that seemed dated was Isobel being out with Covid since Covid was more of a concern in May than in October. Otherwise, it fits in fairly seamlessly.

The key point was how frightfully simple it was for a couple of disgruntled teens to pull off a robbery that netted them 30 guns, many of them automatic weapons.

These teens were smart enough to pull off this robbery yet dumb enough for one of them to be caught on a home security system.

The parents of the two robbers, who gave their children way too much latitude, should have given Jubal pause, as they were oblivious to what their kids were up to. Just like him.

Classmates such as Simon were more intelligent as they gave Clayton and Zach, with their dark thoughts, a wide berth. Simon volunteered a list of Clayton’s gamer friends, which led to the identification of Zach as the second robber.

That also led to Kelly giving Jubal the head’s up about Tyler’s connection, however tentative, to the robbers.

The estranged relationship between Jubal and Tyler made this case much more complicated than it needed to be.

Had Jubal been more of a presence in his son’s life, Tyler could have been a source of intel for the FBI. Instead, Tyler felt more loyalty to the two robbers than he did to his own father, which proved problematic.

Jubal didn’t help himself by approaching Tyler like a source rather than his son. It was little wonder that Tyler wasn’t forthcoming with what little he did know.

A big part of that was that Tyler felt a debt to Zach, who had protected him from bullies at school. Tyler suffered from low self-esteem, which would have been evident to a more present father.

Jubal also didn’t do himself any favors by blowing up at Samantha, who was doing the best she could raising two children primarily by herself. (Speaking of which, where is her new significant other, anyway?)

Some of that was sheer panic because Tyler was missing and likely was going to meet a gunman aiming to become a school shooter.

Fortunately, finding Tyler was a breeze with the resources at Jubal’s disposal.

Rescuing Tyler from himself wasn’t as Tyler gave Zach the hostage he needed.

Jubal tried (he really did) to talk down Zach, and Tyler came through for his father in the end. That led to a happy pause in what continues to be a rocky relationship.

What was the message you took away from this?

What must Jubal do to get his family life back on track?

What is the solution to the epidemic of school shootings?