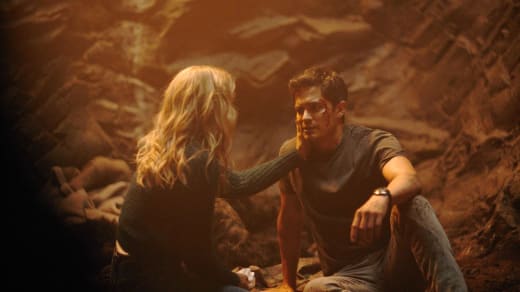 After 12 episodes, La Brea finally featured its most emotional episode to date.

Gavin and his team returned to the clearing on La Brea Season 2 Episode 2 only to learn Eve and Levi had been kidnapped.

This led Gavin to confront his grandfather Silas and ask for his help to find his wife.

When Gavin appeared in the clearing, he had to show the others his scar that Sam fixed when he was a child in La Brea Season 1 Episode 8. Gavin and Izzy soon realize Eve and Josh are missing.

Luckily, Gavin still remembers stuff from his childhood and pieces together that the men with machetes are the Exiles, a violent group he heard stories about from his grandfather.

Gavin doesn’t trust Silas, but he needs him to find Eve.

When Gavin tells Silas that the Exiles have Eve and Levi, he asks for his help in rescuing them.

Silas uses this to his opportunity and says the rescue plan will only work if he goes with Gavin.

Since Gavin doesn’t want to disappoint Sam or the others, he tries to dissuade this plan, but Silas is insistent.

This was one of the most emotional showdowns because Gavin and Sam needed Silas to find their loved ones. Even though Gavin is related to Silas, he doesn’t trust him.

He also wants to get his son back from 1988. He wants to rescue Eve first since she may be in danger.

Sam: Silas has intel on how to get my daughter back. I need to ensure he doesn’t escape.
Gavin: We’re going to save Josh and Riley. But these people have Eve and I have to take Silas. Please.
Sam: Promise me you won’t let him out of your sight and you’ll get him back here.

When Silas tried to bond with Gavin as they walked through the woods, Gavin refused to trust him or even reconsider it until he is reunited with Eve.

Silas believes his old ways protected Gavin, even though people got hurt.

Silas: I raised you. I loved you unconditionally. I still do.
Gavin: If that were true, you would have told Eve how to bring Josh back right away.
Silas: It’s not that simple.
Gavin: No? Why not? Is there a way to bring my son back?

Silas made us wonder many times if he would abandon Gavin, including when Gavin got stuck in a trap, but he came through and killed the bear attacking his grandson.

Silas loves Gavin in his way. I feel for Gavin needing to know more about his parents.

If his parents are alive, could Rebecca be his mom? She’s always been overinvolved in what Gavin does too.

Gavin: If my parents are down here, I deserve the truth!
Silas: You do, but I made a promise and I intend to keep it.

Even Silas’s love has limits, though. While he got Gavin to the Exiles with the map, he drugged him so that he could escape.

We finally learned the backstory of Eve and Levi’s affair, which helped us understand Eve’s reluctance to move forward.

All three were flawed characters, making this an exciting love triangle.

Living with someone who has PTSD and alcoholism is a challenge. Gavin had to commit to getting help and fighting for his family, and Eve had to fight with him. Neither of them is totally to blame.

Eve felt overwhelmed and lonely. The main problem was turning to Gavin’s best friend and their children’s honorary uncle.

Eve has regretted it so much that it has affected many of her relationships. Since her dad had an affair, she didn’t want to put her children through that pain of being in the middle.

To make matters worse, she slept with Levi the day of Izzy’s accident. She tried staying away from him as penance, but she only felt guiltier.

Eve finally made amends with Levi and admitted she loves and needs him.

Hopefully, she gets that chance to reunite with her daughter soon as well since she’s desperate to make amends.

As Ella had heartfelt reunions with Ty and Veronica, Izzy felt more alone than ever.

Ella: I didn’t remember them going through.
Ty: I don’t follow. Why would you remember?
Ella: Because Ty, I’m Lilly but now my name is Ella.
Ty: Is it really you?

Only Sam could reach her since he was also struggling and missing the rest of his family.

As he bandaged her prosthetic leg, she realized Sam was Andrew’s dad, the boy she met at the vigil in La Brea Season 1 Episode 8.

In a heartfelt scene, Sam and Izzy shared their grief as they discussed how their loved ones missed them but never lost hope. Sam finally seemed more like himself as he could help and counsel others.

We’re going to get them both back. I know we will.

Josh and Riley’s storyline in 1988 felt disjointed from the rest of the scenes in 10,000 BC. The scenes were brighter and happier.

The best part was they appreciated their fathers more.

Riley: I could totally run into my dad here. How crazy would that be?
Josh: Would it be as crazy as hanging out with your 10-year-old dad and sending him through a light portal?

In 1988, Josh seemed more Gavin. When figuring out the Hollywood sinkhole, he had his dad’s attitude and believed there was more to these sinkholes.

Unfortunately for them, someone heard Josh’s claim and began following them, hoping to hear more and contact them.

It’s hard to tell if Frank Marsh is trustworthy. He knows a lot about sinkholes and can predict when the next one is coming.

He seems over-eager to get his hands on the info that Josh and Riley know. Will he betray them, or is he a genuine ally?

Since Frank sounds like Gavin and is frustrated that no one believes his sinkhole theories, Josh wants to help.

It triggered something, and he feels guilty and thinks that if someone believed his dad, maybe they wouldn’t all be separated.

The love triangle kicked into high gear, but the series went the predictable route with the cliffhanger.

As Eve and Levi professed their love, Gavin was found outside the Exiles site.

Eve has struggled with guilt over not being honest with Levi and over Izzy’s accident.

How will she react to seeing her estranged husband again, and will the three of them be able to set aside their issues to escape the Exiles?

While this was an exceptional episode emotionally, La Brea is still lacking in their sci-fi effects. It was teased this was the season of “creatures and chaos.” We haven’t seen many new creatures yet.

In this episode, we only saw a bear face off with Gavin.

I appreciate how quickly Gavin, Izzy, and Ella ended up at the clearing and the character evolution we’re getting. Still, those watching for the sci-fi effects and not the family drama may be disappointed.

Over to you, La Brea Fanatics. Will Gavin save Eve and Levi? What news does Scott have for the others?

Did Josh and Riley make the right decision to help Frank? Chime in below in the comments.

Remember, if you missed an episode, you could watch La Brea online via TV Fanatic.

La Brea airs at 9/8c on Tuesdays on NBC.