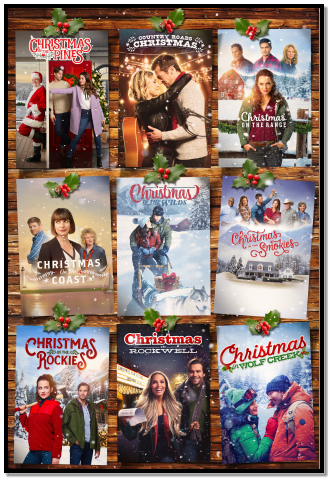 Yes, we know that it’s not even Halloween yet, let alone Thanksgiving, but we’ve still got Christmas on our minds.

And if you thought you’d seen all avenues of holiday entertainment coming your way, we’ve got even more news to share. Imagicomm Entertainment has a bevy of feel-good Christmas programming, and we’ve got the details on their new and older content and where to find it.

The first thing you’ll notice is that there are a whole lot of exciting stars you know very well appearing in these productions, including Chesapeake Shores’ Stephen Huszar and Schitt’s Creek’s Tim Rozen.

It seems that no matter what movie you’ll be tuning in to watch, you’ll see a familiar face bringing you holiday joy.

While on the road, the spirit of the season opens her heart to forgiveness and new love.

Ex-child actor Alyssa Strader returns to her hometown to hide from the press after a movie flop.

But when she meets Jake Willsey, a local cinema owner, will she be able to hide from the paparazzi, or will her new relationship make front-page news?

Sam Gavin has her hands full between managing her animal refuge center and directing the town’s annual Christmas play.

But when the reindeer and star of the show goes missing, Sam and her new boyfriend, Austin Spencer, must drop everything and set out to find him to save Christmas for the entire town.

Christmas in the Wilds

Separated by a blizzard, new couple Buck Johnson and Jessica Alaway take on the uncharted wilderness in hopes of reuniting for their first Christmas together.

But as their adventure becomes a battle for survival, they realize how far they’re willing to go for love.

Christmas in the Pines

Ariel Colt thought she bought the perfect cottage for Christmas, but, through a mix-up, two offers were accepted on the house.

As she battles Mark Henderson, the other buyer, Ariel realizes she may not only have found the perfect house but also the perfect love.

Christmas in the Rockies

After her father is hurt in a timber accident, Katie Jolly must enter a lumberjack competition to save her family’s business.

But when Harrison Brock, the paramedic who saved her dad’s life, also joins the contest, a romance sparks just in time for Christmas.

Christmas on the Range

Kendall Riley has just one holiday wish: to keep the family ranch solvent, even though a callous neighbor wants her land.

When a stampede threatens to wipe out everything she’s worked for, her rival’s son, Clint McCree, offers help… And maybe more. But can he be trusted?

Christmas on the Coast

New York romance novelist Dru Cassadine is desperate after a string of flops. With her publisher about to drop her, she has just weeks to turn out a bestseller. To spark her creativity, Dru retreats to her coastal hometown for the holidays.

When handsome local widower Brysen Flynn enters her life, raw fiction turns to real romance on the Southern shore… with an unexpected twist no one saw coming.

Christmas in the Smokies

Clinging to the only life she’s ever known, Shelby Haygood finds herself on the verge of losing her family’s berry farm.

When former love interest and musician Mason Wyatt returns to town, Shelby finds herself caught between his affections and her devotion to the family farm.