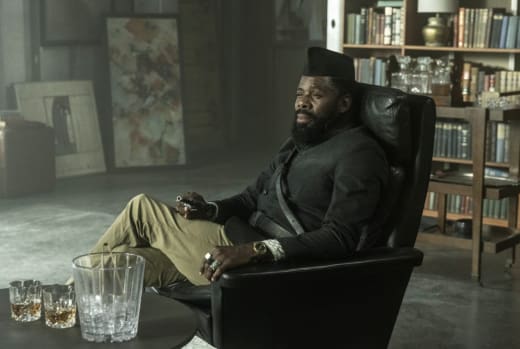 The series has been bogged down by frustrating storylines so far this season, and “The Portrait” took some narrative risks that should result in some significant developments down the line.

Then again, you never know how the cookie will crumble with this show.

When Fear the Walking Dead is good, it’s the best show in the franchise, but it’s hard to defend it when the storylines are told in a meandering way when the show is terrible.

Morgan showing up at Strand’s Tower was always going to come with some caveats, but the beauty of this installment was that it was essentially a look inside Strand’s psyche.

If you watch Fear the Walking Dead online, you know he’s blossomed into this sass-filled villain who is being super picky about who he lets inside his building.

A tower might seem like a safe haven from the perils below, but the Stalkers managed to use the height of the building to their advantage without a second thought.

Throwing exploding walkers at the building was an effective tactic to show Strand that nothing is ever sacred in this post-apocalyptic world.

He can have this big army and this big building with a horde of walkers out front to keep people away, but it doesn’t make him or the building invincible.

Morgan: I just told your people I don’t want any trouble.
Alycia: I didn’t bring you here to cause trouble. I brought you here because I need your help.
Morgan: Alycia.
Alycia: You look like shit, Morgan.
Morgan: I’ll be honest with you, I feel like shit. I thought we’d lost you.
Alycia: No, I was safely underground while the rest of the world burned.
Morgan: That’s why I don’t get this. Your people, you’re the ones who attacked the tower?
Alycia: No, those aren’t my people. Not anymore.

Allowing Morgan into the building in the first instance was a shocker, but my jaw hit the floor when we learned Morgan poisoned him.

The development also comes with some significant flaws, however. Surely if you just poisoned someone, you would clean the poison off your hands, especially if you’re dealing with a baby.

On top of that, why wouldn’t Morgan give Strand enough poison to kill him if that was the intent from the beginning?

I would have much preferred this storyline left on the cutting room floor if the writers wanted it to come across as half-baked.

It’s a dog-eat-dog world in this nuclear wasteland, and Morgan resorting to poisoning Strand added depth to the character we haven’t seen in years.

Strand succumbing to the poison would probably divide the fanbase, but it would have made for some great scenes that showed viewers that the powers that be would take risks.

Another big issue was how the Stalkers were dispatched off-screen like they served nothing to the overall plot.

These people were threatening to destroy the whole area with the nuclear warhead, so it completely ruined the momentum by having them dealt with off-screen by Morgan’s friends.

Strand: I knew it, I knew my instincts were right. I turned you away before. Nothing is going to change that.
Man: I don’t know about that. At the very least, it’ll destroy your tower.
Strand: What do you want?
Man: Same thing we wanted when we called before. A new beginning for my people. A place to call home.
Strand: That’s not going to happen, not here, not now.

Strand surviving and declaring himself as Mo’s guardian from that point forward came out of nowhere, but the more likely scenario is that he thinks the child will give him humanity.

Strand has turned on everyone throughout his show, regularly throwing people to the wolves to keep him safe.

Now that he knows the Tower is flawed and could be destroyed by irradiated zombies, he will want to regroup. Having Grace in the building will undoubtedly help matters, but does anyone else think Strand was too picky about who he allowed inside?

The scenes with him on the phone were some of the best because they highlighted that he was looking for a certain kind of survivor.

There was still some humanity in Strand when he lowered the baby down to Morgan as the walkers circled.

Alicia’s return was highly underwhelming. She’s the best character on the show, but she somehow always gets the worst material to work with.

I can’t be the only one expecting Madison or someone else to appear at the end. Alicia revealing her face reminded me of The 100 more than anything.

We had radiation, Alicia dressed as a Grounder, and everyone was running for dear life from a threat caused by said radiation.

Hopefully, we delve deeper into what happened to Alicia when the warheads went off because the show purposefully left us in the dark to bring her back at one point.

Dwight and Sherry ditching Mickey and working with this group seemed strange when considering the events of Fear the Walking Dead Season 7 Episode 5.

There was so much emphasis on their role in this new world, and being told they had to do what was right for them was a bitter pill to swallow.

From a technical standpoint, the final scenes were fantastic because you had exploding zombies sending radiation toward our heroes. It doesn’t get any more deadlier than that, does it?

We found a warhead out here. Must have been a dud, but still killed every person who touched it, including those who stuffed pieces of it into these dead.

A lot is riding on Fear the Walking Dead Season 7 Episode 8. Will we finally get some clarity about where this mediocre season is headed?

Padre has been this overarching storyline of the season, so if we don’t get anything on the group, will these boring episodes even be worth it?

What are your thoughts on Alicia’s return?

Do you think Strand should have died?

Fear the Walking Dead continues Sundays at 9 p.m. on AMC.

‘New Amsterdam’ Says Goodbye to Kapoor (PHOTOS)
This Is Us Round Table: What Happens to Toby and Kate?
SEAL Team Season 5 Episode 14 Review: All Bravo Stations
Race to the Center of the Earth: Cancelled, No Second Season for Nat Geo Competition Series
Guillermo del Toro’s Horror Anthology Series ‘Cabinet of Curiosities’: What We Know So Far
Follow us on Facebook
Follow us on Twitter