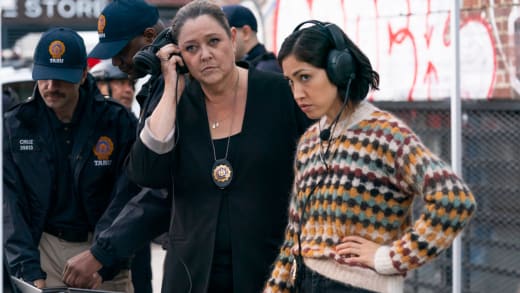 What happens when an innocent person gets stuck in a slow-moving legal system?

Law & Order Season 22 Episode 9 asked that question, and the answers it gave were disturbing.

After a man had been incarcerated for 18 months while awaiting trial for murder, his attempt to fight back led to tragic consequences, and all the guilt in the world couldn’t undo what had been done.

In recent years, crime dramas have often examined the problem of racism in the police force. Many cop shows feature police harassing Black citizens or suspecting them unfairly. Often, Black cops on these shows end up feeling caught between two worlds.

While these are important stories to tell, the police are only one part of the legal system, which also includes judges, lawyers, correctional officers, and wardens. As a series that features both the police and prosecutorial side of the system, Law & Order could examine the entire system, telling a more comprehensive story.

Troy lost 18 months to this system before he escaped. It wasn’t only that the police falsely accused him of a crime; it was also that the judge ordered him held without bail, the system moved at a snail’s pace, and the DA’s office was so overworked that Price hadn’t had a chance to review all the evidence.

Even Troy’s lawyer, the idealistic Ms. Frazier, played a role in his ordeal. Frazier was an inexperienced lawyer who made many mistakes throughout his case; although she was on his side, her newness to the profession probably contributed to his incarceration.

Her insistence on putting the system on trial certainly didn’t work in her favor. She was right that it had failed Troy, but instead of allowing witnesses to demonstrate that, she kept trying to make speeches during cross-examinations and aggravating the judge.

Mr. Price, we both know this is my first murder case, and I know you think I’m naive for believing in my client, but I have proof that will exonerate him.

A more experienced lawyer might have known how to argue the case more effectively. In addition,  her inexperience may have contributed to Booker’s bail situation.

Not every accused murderer goes to Rikers; some are granted bail. So, it’s possible that the lawyer screwed up, though it’s equally likely that the arraignment judge was racist or denied bail to people accused of this crime.

The cops screwed up, too. Why did it take 18 months for a security tape exonerating Booker to come to light?

If that tape had been discovered long ago, a lot of this could have been avoided.

Frazier’s claim that Price belonged in jail for the guard’s death went too far. Juries don’t like those kinds of exaggerations; they tend to cross the line into excuse-making.

It’s true that if Price had declined to prosecute the case, Booker wouldn’t have killed a guard or anyone else. But Price’s job is to evaluate evidence and prosecute based on it; in addition, he is not in charge of the DA’s office — McCoy is.

Booker’s choices, horrible as they were, were understandable. He’d been in jail for over a year when he’d done nothing wrong. The conditions at Rikers were terrible. No one listened to his explanation of what had happened that night.

McCoy: You did nothing wrong. The truth would have come out eventually.
Price: Eventually came too damn late.

He couldn’t trust that a jury would believe his side of the story.

Unfortunately, his choices made things worse.

He escaped while his lawyer was in the middle of an evidentiary hearing that might have led to his release, and she soon had proof he was innocent. But by that point, he’d taken hostages and killed a guard. The police and DA’s office couldn’t ignore those crimes.

One point this episode hammered home was that what’s legal and what’s fair are two different things. Legally, Price had to charge Booker with murder no matter how he felt about it. He also couldn’t do any better than an offer of 12 – 15 years for Man 1. He and Shaw hated it, but that’s what the law said.

Frazier brought up a lot of solid points about the problems with the system, even if she did it inappropriately. She did a great job of explaining why Booker was desperate.

The problem is you can’t punish “the system.” Systems are made up of people; that’s who pays fines or goes to jail when something happens that shouldn’t.

Price was able to swallow his guilt, but Shaw was struggling after Booker was found guilty. What will happen with him now?

Will he remain with the police department? I hope so. He’s one of the best detectives Law & Order has had recently.

Shaw switched from law to police work to help his community, but he ended up putting an innocent Black man away, which will stick with him forever.

It’s too bad the legal system doesn’t do the kinds of post-mortems that hospitals do when a patient dies. If everyone involved had to meet and discuss what went wrong and how to prevent it next time, that might lead to real change.

But as it is, Shaw is as much a part of this failed system as Booker is, and it’s unclear how he will deal with his awareness of that.

I thought this was a strong winter finale; what did you think? Hit the big, blue SHOW COMMENTS button and let us know.

Don’t forget you can watch Law & Order online while you wait for the series to return.

Kate Walsh Calls Herself the “Elder Statesman” of Grey’s Anatomy
New Crime Dramas Coming to Netflix in 2023 & Beyond
Pamela Anderson: Tim Allen ‘Had No Bad Intentions’ in Alleged Flashing Incident
USD POLL : Do you like it when press releases include the cast list for the episode?
The Daily SpoilerTV Community Open Discussion Thread – 30th January 2023
Follow us on Facebook
Follow us on Twitter