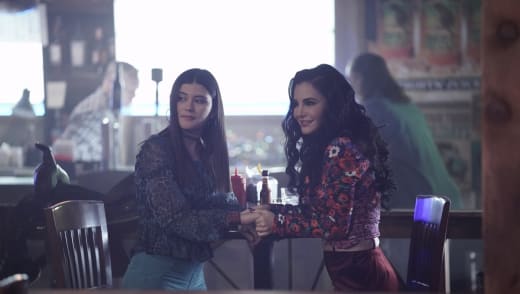 Y’all, the drama is getting juicier than ever!

A few things came to light on Monarch Season 1 Episode 3; as Albie’s infidelity became a topic of discussion among the sisters, Kayla found out that she was pregnant, and Nicky gave the slimy Clive the ole heave-ho.

But, of course, more concerning than ever, that body Albie buried? It’s gone! Some of the Roman siblings learned that they grew up in a house of lies and that their parents’ relationship was nothing like they imagined.

The sad thing here is that it’s one thing if the rest of the world had a specific idea of what the Roman couple was like, but it’s entirely different when their kids bought into the false image and facade they had.

It’s not to say that Albie and Dottie didn’t love each other. Most couples have issues, and it’s not unusual for them to keep those problems to themselves.

It’s evident they were the love of each other’s life; even Albie’s affair didn’t deter that. They were everything to each other for 40 years.

But it sucks that the kids have formed their relationships around the image of their parents with their picture-perfect marriage. It was something to aspire to, even if the expectations were impossible.

Nicky: Isn’t anyone’s marriage what it’s supposed to be?
Gigi: Mine is.

Gigi and Nicky have shaped their marriages by trying to have what their parents have. It has meant that Gigi is too blind to see what’s happening with Kayla and Luke behind her back, and she truly believes her marriage is as rock solid as her parents.

And Nicky has crushed under the weight of Clive’s constant infidelity and the notion that she simply has to put up with it to preserve their family, protect the brand, and uphold a specific image.

If she had to face that her marriage failed, it would mean that SHE failed.

For Nicky, that’s one of many ways in which she flounders in her mother’s long shadow.

Clive kept feeding her all the usual drivel about things being different this time, but Nicky couldn’t catch a break. Even the anniversary gift she thought was hers belonged to the other woman. It’s ridiculous.

Flushing the diamond earrings down the toilet was a heck of a reaction. I hope she was telling the truth about fishing them out and donating them. The poor diamonds shouldn’t have to suffer because Clive is a jerk!

But her ultimate boss move was when she brought Imogen, the other woman, to the Queen of Country as her date. The dramatic move to wear funeral black with Imogen donning that men’s suit was particularly inspired, too.

Her statement was clear that she was done with Clive and that everyone should direct all the blame toward him rather than her and Imogen facing the brunt of the blame, criticism, and attention.

Kudos to Nicky for that evolved feminist take on the issue. Privately, there would still have to be some words exchanged since it’s not like Imogen didn’t KNOW Clive was married with kids and all that. But alas, Clive should face the brunt of it all.

It frees Nicky up to pursue this flirtation she has with Wade, which is potentially more interesting to watch. However, Clive discovered the drugs used to assist Dottie in her suicide, and now he’s vengeful.

One cannot put it past this man to piece things together and expose Nicky. He’s a threat to the Roman family, which is why he’s been the number one person on the list of potential people Albie killed and buried.

Nicky got her moment to step into the spotlight, and she held her own. She’s slowly succeeding at becoming her own person and getting the attention she deserves as an artist.

She won the crowd during the Queen of Country, and while Mackenzie still seemed difficult to please, she didn’t deny a possible tour for Nicky. She’s off to a good start with that.

It was so great to see Rochelle Aytes pop up; she’s always a fun face during works.

But Nicky may face attacks on multiple fronts since she also has to deal with Luke’s suspicions. She confessed to writing the letters, claiming that she wanted to smooth things over and for everyone to be okay.

However, it was not enough to assuage Luke. He’s determined to find out what really happened to Dottie, even when he understands that the truth could rip apart the family and their image, and have severe, life-changing legal consequences.

I know that you’re the smart one, and I barely graduated high school. But seeing your parents for who they really are doesn’t make you bad, Nicky. It makes you whole.

He got the word that Dottie had too much oxy in her system and that she got poisoned. But how exactly do they determine that if her death is already ruled a suicide?

Initially, Luke thought Albie had something to do with it, and he possibly could still be suspicious of his father since Albie’s method of grieving made him resistant to performing publicly or attending the events that honor his wife.

But he also has more reason to zero in on Nicky.

It speaks to the sibling dynamics and how each of them feels in relation to their own standing in the family, that Luke, Dottie’s favorite, who always felt detached because he wasn’t a singer and generally left out of things, is wandering around trying to learn the truth when his sisters could tell him but refuse.

He also has no idea about Albie’s affair. If he did, would it bring them closer together? Would it help him connect with his father more than he ever has, or will it cause more issues between them?

The song Dottie left for Albie felt so raw and vulnerable. But there was some mention of the barn, which has one wondering if there was more meaning to it and if it references whatever happened all those years ago that Dottie kept a secret.

Even Gigi’s flashback to her mother snatching the boots away from her felt like it was something beyond what Gigi assumed. Gigi has gone her entire life feeling as if Nicky was Dottie’s spitting image, and Dottie didn’t think Gigi could ever be like her because of her appearance.

But Dottie yelling at Gigi that she’ll never be like her felt like it had an ulterior meaning. Dottie screamed like someone who didn’t want her daughter to end up “bad” like her. Dottie seemed more guiltridden than anything.

Secrets abound in the Roman family, and there’s no telling how the family will fall apart when all of them come to light.

The siblings keep things from one another with ease. I lost count of the number of times poor Gigi spoke fondly about her marriage, and Kayla and Nicky had to bite her tongue.

She’s holding all the secrets related to that, but it feels like Gigi can be collateral damage if Nicky has to weaponize that information to stop her brother.

The longer we wait for the truth to come out, the more it hurts. Kayla and Luke are addicted to one another and can’t seem to tear themselves away.

Kayla seems remorseful, but she also can’t seem to shake Luke. And Luke is perfectly content and seems fine even if it blows up their lives. He hasn’t exactly expressed an ounce of concern for his sister, which is trifling.

Kayla: I feel terrible doing this to Gigi, I can’t keep coming here.
Luke: That’s what you said last time, and the time before that.

Interestingly, Nicky’s approach to this situation hasn’t been to confront her brother but rather Kayla. She’s a protective sister, no doubt, but Luke has a lot to answer for, and hopefully, that day is coming.

He’ll face a serious blindside when he finds out Kayla is pregnant. If they thought they could keep the affair under wraps or even end it, the pregnancy has blown those options to smithereens.

Kayla not drinking or eating her sushi was like a big neon sign that screamed she was pregnant, and Nicky didn’t even know how to react to all of that. But how does Nicky think she can help deliver or soften the blow of this infidelity? Gigi is going to SPIRAL!

And can you imagine how Albie will react when he finds this out? He seems to have a soft spot for Gigi and always has tension with Luke.

The business side of Monarch tends to take a backseat to all the family drama. There’s something notable about someone else having the rights to the Romans’ entire catalog.

How did that even happen?

And Luke is busy looking into Dottie’s death, but he may overlook many other things. He never got back to Catt at all, something she couldn’t wait to share with Albie when she confronted him about not signing her daughter.

She has a lot of gumption, and you must applaud her boldness at the bar and grill. She and her daughter and struggling to make ends meet, so she’s putting everything into this one shot at catapulting Ana to stardom.

I will not let you hurt my sister, do you hear me? You need to end it!

It was funny how dismissive she was of Ana’s burgeoning connection with Ace. If Albie wasn’t her way into Monarch, why wouldn’t she see the value in Ana cultivating a bond with another member of the Roman family? A connection is still a connection!

Ace came through with the contract. Although, how binding will it be? Does anyone even know that’s what he did? How does he have the authority?

Ana is a decent singer, and her Spanish version of Through the Brambles was good. Of course, the most fun and my favorite song of the hour was Gigi’s rendition of Lizzo’s “Juice.”

She was so vibrant, confident, and sexy when performing it, and the energy was palpable.

I’m a sucker for “Breathe,” but it felt very perfunctory, likely because Nicky wasn’t supposed to be buying into that love song when her marriage was a dumpster fire.

Gigi has the voice of an angel, so even the brief moment of her singing The Bramble was enough to make you smile, as did her singing another Monarch original. And, of course, her duet with Albie was a highlight, too.

But a girl needs to know what happens in the three months between all this and Albie shooting and burying someone! Nicky covered for her father easily, but the cops didn’t believe her.

Deputy: So, what do you think?
Deputy 2: I think she’s lying through her teeth.

But the worst part is someone beat them to the scene and dug up the body, but who? They’re in deep crap if it’s not a friendly!

Over to you, Monarch Fanatics. Were you shocked by the pregnancy reveal? Who do you think is buried, and who do you think stole the body? Sound off below.

You can watch Monarch online here via TV Fanatic.

POLL : What are you watching Tonight? – 4th December 2022
FBoy Island: Cancelled by HBO Max, Season Three Being Shopped by STXalternative
American Dad – Episode 17.22 – The Grounch – Press Release
True-Crime Documentaries Coming to Netflix in 2023 and Beyond
‘Three Pines’: Alfred Molina on Gamache’s Long-Buried Demons in Edgy Murder Mystery
Follow us on Facebook
Follow us on Twitter