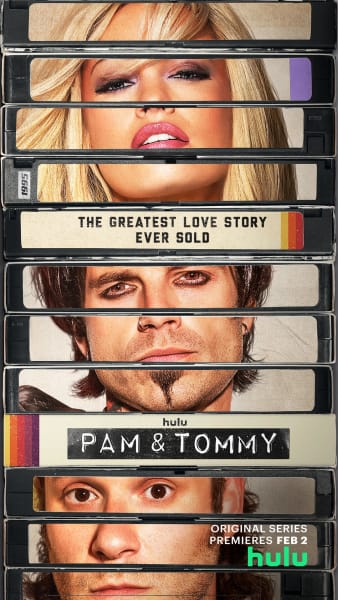 Beautifully cast with Lily James and Sebastian Stan in the lead roles, the story is an earnest exploration of their love and the forces that drove them apart.

If that had been the focal point of the series, it would be an incredible success. It’s still successful but falls short of its goal by taking a comedic approach to what befell the couple.

Once upon a time, Pamela Anderson and her role on Baywatch were the talk of the town. Musically, Motley Crue was one of the biggest bands in the business. Anderson and Lee set the world on fire with their relationship and public displays of affection.

Pam & Tommy portrays Anderson as a beautiful girl hoping to make her mark in Hollywood who discovers that playing a sex symbol isn’t all it’s cracked up to be.

Pam wants to do more on Baywatch than jiggle up and down the beach, but her producers have her pegged as such and won’t budge.

With that kind of spotlight on her, Pam also gets into relationships with the wrong men, and when the show catches up with her, she’s out with friends nursing a heart yearning for love.

At that time, Tommy already has a reputation for being a bad boy. Most hair bands of the time did. So when he spots Pam across a nightclub and makes his approach, her friends are waving red flags. They believe there’s more disappointment in her future.

Here’s the thing, though. Pam and Tommy fell madly in love. The series portrays them as soulmates, finding love unexpectedly and riding that wave for all that it was worth.

Tommy’s reputation wasn’t a mistake, though, and that unsavory side of his personality came through when he acted like a megalomaniac to the construction crew he contracted to transform his mansion into a love palace.

They are ultimately kicked off the job without compensation without a logical explanation, and after stewing in his juices a while, Rand cooks up a plan to steal Tommy’s safe as payback.

Now, this is a true story. Just like there are Pam and Tommy, there is a Rand who broke into their home and stole a safe.

Unfortunately, for whatever reason, Pam & Tommy tries to play to the comedic aspect of Rand as a “doofus,” which throws an unflattering spin on the series as a whole.

The rest of the story made history. Some say that reality TV is a result of the profitability of the Pam and Tommy sex tape. Getting an inside glimpse of love that pure and sexual is rare, and if men got off on it, women realized that Pam and Tommy were a part of something magical.

Rand’s long-gestating soon-to-be-ex-wife, Erica (played admirably by Taylor Schilling), was in awe of the couple as well as Pam’s eye for the camera.

It’s Erica who voices how sweet and wholesome their love appears to be and that when Pam focused on Tommy’s face as he climaxed, she saw the love in his eyes.

James and Stan become Pam and Tommy. They don’t look just like the people they portray, but James is in touch with Anderson’s soft soul, and Stan wears his heart on his sleeve as Tommy.

The episodes unfold with a feeling of dread as Pam and Tommy, initially oblivious of their lives on display via VHS, descend into a living nightmare where they’re soon known more for their personal lives than the careers they’ve worked hard to build.

Every decision they made in reference to the tape (and ultimately an online stream of it) drove them farther apart. Their great love story plays like a Greek tragedy, and there is enough raw emotion in Pam & Tommy to make that comparison.

As Pam tries to wrap her head around the violation she’s suffered, Tommy takes a more traditionally male approach. There’s a disconnect for him about how deeply Pam is affected as his focus turns to vengeance for those who wronged him.

It teases a conversation that we still have today about how women and men are treated differently regarding sex and how differently they react to it.

Throughout the series, Rogan’s and Offerman’s scenes rudely interrupt the more pertinent discussion at hand. At one point, Tommy is shocked to discover that for Rand, it was all about the money.

Thankfully, it goes a little deeper than that for Rand, but not enough to make up for how he is portrayed. But when Tommy asks what Pam had ever done to deserve what she’s gone through, it offers both men and the audience some food for thought.

Series based on real people going through difficult situations don’t always hit the mark. Pam & Tommy, though, surpasses expectations when it comes to the titular stars.

With James and Stan, Pam and Tommy come across as flawed but empathetic, as two people with the world at their feet who found the great loves of their lives.

Seeing their despair as reality unfolds before them without their consent should make Anderson and Lee uncomfortable but proud to have received such layered performances.

And if their unfortunate situation launched the reality industry as we see it today, at least today, reality content is done with consent.

Also today and thanks in part to this series, Anderson and Lee are seen as far more deserving of understanding than the fame chasers that came in their wake.

Pam & Tommy is refreshingly real with lead performances by James and Stan that do the material justice.

This isn’t the story as we knew it in the late 90s, but the best parts of Pam & Tommy uncover the beautiful love of a doomed couple and what drove that love into the ground.

It also speaks to how one man’s crime changed the landscape of celebrity and the internet for all time, and it’s a hard pill to swallow.