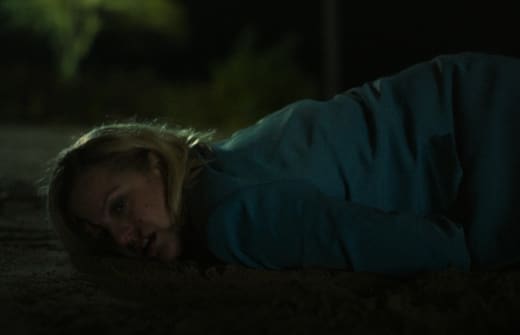 Wow, Jinny escaped death, but someone else wasn’t so lucky on Shining Girls Season 1 Episode 7.

With Harper violating both Jinny and Kirby’s privacy, they’re experiencing an increasing number of mid-life changes.

It was done very well, with the violence blinking rather than us needing to suffer through watching the horror Kirby suffered.

It also offered director Elisabeth Moss an interesting way to act in the scenes as she would have been able to film it, take a look, and set it up again without concerns for continuity on such a crucial scene.

It was so brutal and ugly. She was walking her dog and on the precipice of a significant career development, and Harper jumped her from behind.

That’s how life is, though, isn’t it? Atrocities happen while you’re minding your own business. The perpetrator has no regard for his victims, and with Harper, its even less because of the amount of time he spends preparing for it.

It’s just gross. I feel like I’ve said that before, but that’s how it feels — like you’ve got something on you that you cannot shake off.

Kirby was sharing the details of her attack with Dan and Jinny, and when Kirby brought up Jinny’s keychain again, Kirby didn’t hold back.

Kirby: Your keychain. He took your old one and left it in another woman.
Jinny: What does that mean? Is he gonna kill me?
Kirby: He already has, just not yet.

If it wasn’t for Kirby’s resilience and determination to survive, she would have been just another statistic, and Jinny wouldn’t have had a snowball’s chance in hell to be spared.

For now, Jinny is spared. Harper is still terrorizing her, but he’s dragging it out longer than he might have if Kirby wasn’t alive and he hadn’t discovered the house’s properties transferred to the world outside of it because of her.

Every scene with Jinny is filled with ever-increasing tension, and when she was hiding behind the planetarium’s telescope, we all probably wrote her off for dead.

She had nowhere to run, and if Harper wanted to, he could have murdered her right there, and no one would have known for a while.

But it wasn’t Harper who found her. It was Kirby. The two women are beginning to rely on each other, sharing thoughts and theories about Harper.

If Harper begins to feel threatened, he might take a more measured approach to murdering them both once and for all.

Harper is either pulled in too many directions to effectively keep track of them both, or he’s too conceited to believe anybody could piece things together. More likely, it’s a little bit of both.

Kirby and Dan took shot in the dark and found Teeny’s and where Klara was murdered. Neither of them could believe that Klara was killed in 1920. They imagined maybe a decade, but not that kind of time difference.

But they had their hands on the evidence proving that Klara and Harper were of a different time when they found their plant IDs.

Discovering that kind of evidence that counters every rational thought wasn’t going to be an easy sell, but Marcus made everything worse.

Before they started investigating Teeny’s, Kirby sat down with Marcus to try to explain what has been going on with her. It was a gentle push from Dan that made it happen.

But what she tells him is nonsensical from his perspective. Frankly, it would be hard for any of us to swallow a loved one crying timeline shifts as a reason for being a little off.

You know, I never, never let people take too many photos of me. I never feel like I need ’em. I see myself. I stay aflight. I don’t cause arguments. I don’t fight, but when my wife told me what happened to her, I wanted to find ‘im and kill him. I never felt that before. That violence? Oh, it pulled the sinner out of me, changed me into somebody I don’t even recognize, and I can’t even imagine what she is going through right now. She really doesn’t remember who she is, and I’m watching it happen to her. If you don’t want to hear it, then I don’t know who I am supposed to tell. Who do I tell?

When you hear Marcus trying to understand how he can help if not just by going to Abby, the desperation in his voice is genuine.

That spark we saw in the premiere when he seemed interested in Kirby despite not knowing her well was also genuine. In all likelihood, they would have found their way to each other and fallen in love.

But it didn’t happen for Kirby and her continuously changing reality. His attempt to care for Kirby was misinformed by rationale.

So by the time Kirby and Dan returned to the office, Abby was set on forcing Kirby to take a leave of absence.

After learning that she was ready to make her mark on the day of her attack, the derailment was tough to process as a viewer. Imagine how Kirby felt.

Just because I don’t work here anymore doesn’t mean I’m going to stop looking for him.

What Kirby knows is that unless she stops Harper, he will continue, and in some form, her life and its trauma will continue in cycles until he is stopped.

Jinny’s involvement allows Dan to see a bigger picture. Maybe, if Kirby had been able to show Marcus their evidence and introduce him to Jinny, things would have taken a different course.

Kirby moved on from Marcus, and he barely seemed concerned by that point. Was he the kind of guy that Dan once pegged him to be? His lack of reaction when she chose to leave was a surprise.

But when it comes to surprises, there were bigger ones to come.

I’m wondering if Kirby will remember meeting Klara, or if their brief encounter is a distant and irretrievable memory she’ll never recover.

Klara was directly linked to her through that night, but it was Dan who went searching for those answers at the club.

The worst part of his death (I think he’s dead) was that Freddie was waiting for him in the car. It’s bad enough to be murdered, but somehow ever worse when your child is waiting for you, and you never return.

Well, this was even worse than that since sicko stopped by the car to engage with Freddie, who isn’t an idiot and called him out on Harper wearing Dan’s jacket.

Perhaps the fingerprint smudges on the window will lead to something. Harper was chained to the hospital bed after he and Kirby scuffled, so they might be out there somewhere.

Murdering someone so close to Kirby changed things drastically. We saw how deeply Jinny’s life was affected, but we’ll have to wait for the finale to see how Kirby’s life takes shape.

She has a much different look, so her career derailment earlier in the episode might seem like child’s play for the life she’s living in this newly adjusted reality.

What are your thoughts on Dan’s death?

How do you think this story will come to a close in the Shining Girls Season 1 finale?

Kim Kardashian Too Cheap To Use Her Own Skincare Products?
‘Chucky’ Season 2: Lachlan Watson Joins as Twins Glen/Glenda
‘The Bachelor’ alum Sydney Hightower marries NFL player Fred Warner in California wedding
Everything Old Is New Again in Fall TV, From ‘The Rookie: FEDS’ to ‘LOTR’
Magnum P.I. Saved! Reboot Lands Two-Season Renewal at NBC
Follow us on Facebook
Follow us on Twitter