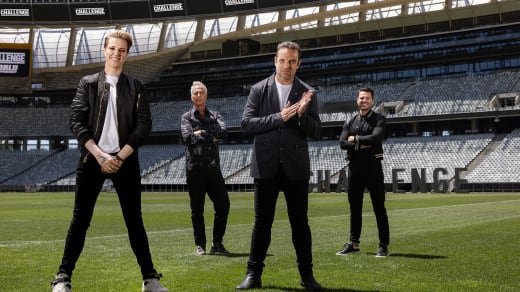 The Challenge is going global.

Paramount+ today revealed that the highly anticipated global tournament, The Challenge: World Championship, will premiere on Wednesday, March 8, in the U.S. and Canada.

Fans will be treated to two back-to-back episodes on the premiere date.

The series will debut on the service in the U.K., Latin America, and Australia on Thursday, March 9, and in Germany, Switzerland, Austria, Italy, and France on Wednesday, March 15.

“In this 12-part series, each global MVP will be paired with a Challenge Legend, a notable veteran from a previous season of the MTV series, serving as a partner to form the most epic teams in the history of the franchise,” the logline teases.

“They will help them win power and avoid elimination in order to make it to the most difficult challenge of them all, the brutal ﬁnale worth $500,000.”

The full cast lineup is to be announced in the coming weeks. That part makes sense since some international editions have yet to receive a premiere date.

That being said, the UK iteration should be premiering fairly soon, unless Paramount+ straight-up spoils what happens.

The Challenge: World Championship was created for MTV Entertainment Studios by Bunim/Murray Productions.

Dan Caster and Leanne Mucci serve as executive producers, with Jared March as supervising producer for MTV Entertainment Studios and Donny Herran as SVP of Production, with Angela Liao as executive in charge of production.

What are your thoughts on the iconic series going global?

Outer Banks Trailer: A Shocking Reunion Sets the Stage for Action-Packed Season 3!
What to Watch: A Million Little Things, YOU
The Blacklist to End With Season 10
The Last of Us Season 1 Episode 3 Review: Long Long Time
‘A Family Affair’ Nicole Kidman Rom-Com is Coming to Netflix in November 2023
Follow us on Facebook
Follow us on Twitter