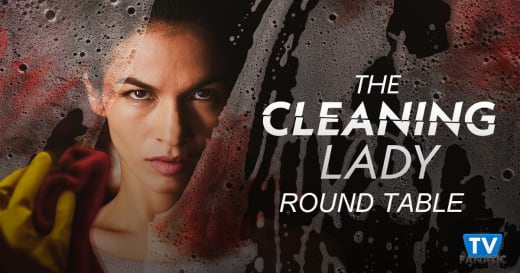 Thony got in everyone’s way as she tried to stop Arman and Nadia from murdering Robert, only putting people in more danger.

Thony asked Garrett to follow Arman, and then she gave Robert CPR after he went into cardiac arrest after Nadia poisoned him on The Cleaning Lady Season 2 Episode 10.

TV Fanatics Jasmine Peterson, Whitney Evans, and Laura Nowak discuss how Thony’s choices will affect her relationships, the progression of Arman and Thony, and whom we think is in danger.

How will Thony’s relationships be affected now that she’s betrayed both Arman and Garrett?

Jasmine: Oh, Thony, baby. The men in her life were shaken after this episode. I have no idea. Ironically, I think that both men care about Thony so much that they still do whatever they can to protect her, so they’ll be upset, but it won’t change that much.

I actually like the prospect of Thony being on the outs with everyone. She always means well, but she’s short-sighted and doesn’t fully consider how her actions affect those around her. I love Thony, but between Arman and Garrett and Nadia and Fiona, I can appreciate if this leads to some self-reflection and things like that.

Whitney: I’m going to say it: Thony annoys me. Look, I get that, first and foremost, she is a mother, and she’ll do anything to protect her family. But it’s frustrating to see her betray Arman, especially who has done a lot to protect her. So, I can understand what she did but still be upset by it. Both things can be true.

How will it affect the relationships? I can see this set up for an eventual Thony vs. Arman dynamic in season 3 (fingers crossed for a renewal!)

That would be fascinating to explore because season 2 has put me in a place where I need them to do something with their dynamic. Like get them together or have them totally at odds for a while. What they’ve done this season hasn’t worked for me.

Laura: Looks like we’re all in agreement. Thony was annoying me too. I also understand that she’s a mom first, but she betrayed Arman twice, first by telling Garrett the plan and then by saving Robert’s life after Nadia poisoned him. What was she thinking, putting everyone in danger again?

As Jasmine said, Thony is short-sighted and doesn’t see how her plans affect those in her life. I want to see her have to earn other people’s forgiveness back.

Do you think Nadia is in danger since she didn’t successfully poison Robert?

Jasmine: Oh, Nadia is DEFINITELY in danger! It won’t take long for Robert to figure out that she could be the common denominator to things going awry or someone betraying him, and it won’t look pretty. Can you imagine how worse Robert probably is if he’s scorned by a woman he loves?

I felt awful for Nadia because she put herself out there, and she could easily pay the price here, and she doesn’t get the same protection and consideration as anyone else. Garrett thinks she’s expendable, Thony doesn’t consider her at all, and only Arman tries to look out for her, but that’s not an easy feat, and she may not be prioritized.

Whitney: I’ve been thinking for a while that Nadia will be the end-of-season casualty, and these last few episodes have only increased that feeling. I also think her death could be the catalyst for Thony vs. Arman, even if Thony is indirectly responsible for her death.

Laura: I’m also worried for Nadia. Robert already had security following her. How will she ever escape? Robert acts like a controlling husband, which will worsen if he suspects anything. Joseph is his eyes and ears and saw Thony and Nadia whispering.

Are you tired of the Luca is sick storyline and wish they’d find something else for Thony and her family?

Jasmine: Honestly, yes. I think that a sick child is how they love to make Thony this relatable woman you root for and how we’re supposed to rationalize her actions and motivations all the time. Similar to how things were with Beth on Good Girls, but it’s gotten old.

It’s not that I don’t care about Luca or anything because I do. He’s a sweet baby, but I’m over it, and sometimes it feels like it sucks the momentum out of the show. We don’t need her fighting for her son’s survival to justify everything she does when we could continue leaning into Thony as a wonderfully complex woman all on her own.

At this point, I want Fi to take Luca with her and stay with JD because he’s not wrong enough to be concerned about everything Thony has dragged them into without even communicating.

Whitney: Oh, this sounds so bad, but yes. I ignorantly believed we left that story in season one and that we’d see more than just that aspect of Thony. That well has been tapped dry at this point, and it’s just not something we need to see every third episode.

Laura: It’s a part of who Thony is, but it’s not working anymore to justify every one of her crimes. By now, I think she enjoys part of the thrill, and it might have been fun to see her own that.

I also agree with Jasmine that by now, it may be better if JD and Fiona watched all the kids. It would be nice if the family could be happy, but that’s not our show.

What are your thoughts on Armony’s relationship this season, and where do you see it heading?

Jasmine: Oh, we’ve had some excellent and meh moments. They were gripping in the first season, and while it hasn’t felt quite the same for me this season, they still have me in a chokehold. The chemistry between the two of them is always simmering, and I love that.

But am I the only one who feels like it’s more one-sided this season? Aside from Thony’s reaction when she knew Arman had to go back to Nadia, it feels like Arman has been putting more energy into Thony and her family.

It’s very apparent how he feels, but Thony. At the same time, she cares about Arman, and she takes him and the care he has for her for granted but also doesn’t trust or listen to him either, so their dynamic feels contentious and imbalanced often. I don’t know how to describe it adequately.

It’s an interesting place for them, and these new layers of tension between them and conflict will only bring them closer together. Many of Thony’s relationships are in shaky territory and getting tested, and I think that’s a fascinating position to put her in. I want to see how that challenges her and she grows from it.

Whitney: I haven’t been a fan, and it pains me to say that because they were one of the best aspects of the first season. I was afraid they would get away from their dynamic and explore new things, which they did, which hasn’t worked.

When they’re together, Jasmine is right. The chemistry is there and everything. But they’ve been apart so much, and there has yet to be much development from season one. I would have never thought we would get 12 more episodes and be in the same place we were at the end of last season.

I also agree that I have no idea how Thony feels about Arman at this point because she’s so flippant about everything. Arman has shown much more care for her, and we’ve got conversations (albeit with Nadia) about some of his feelings.

I understand that this isn’t a show about romance, but the romantic subplot of season one was a massive draw to the series, and it’s a shame that they haven’t capitalized on that this season. It’s why at this point, make them enemies or lovers who can’t be apart, but move them in some direction!

Laura: I agree their chemistry and romance seemed stronger in Season one. They’ve had a few moments where they worked as a team this season that I enjoyed. I had hoped they would become the next mob couple.

However, we still got more trauma-bonded moments and angsty hugs than lighthearted romantic moments. I also hate having them in limbo. I hate it for Nadia almost as much as I do for Arman and Thony. It’s not fair to any of them.

From the Season 2 finale promo, who do you think is in danger?

Jasmine: Oddly enough, I feel we’re dangerously close to losing Luca. Aside from that, I’m also worried about Nadia. I feel like someone has to die, and it has to be a game-changer for Thony, Arman, or both.

Whitney: Nadia! I’ve been so hyper hyper-focused on that. I can’t imagine it being anyone else.

Laura: I also think Nadia could be in danger. I’m also worried about Fiona. JD’s anvils worry me.

What do you want to be addressed in the Season Finale?

Jasmine: I don’t even know how to answer this. I want an action-packed, edge-of-your-seat, good season finale! The promo looks promising. Things need to shake up for Thony as her relationships with everyone in her life are tested.

Whitney: I want to be shocked. I want to walk away with my jaw on the floor and screaming for a season 3!

Laura: I also want an action-packed EPIC finale that will entice FOX to renew the series.

What was your favorite part of this episode, or do you have anything to add?

Jasmine: I appreciated that Arman was forthcoming with Garret when he confronted him. Once he told the truth, Garrett couldn’t even be as angry because he knew that Arman would do anything to protect Thony. I also loved how Nadia confronted Thony because so many lives were at stake, and it needed to be said.

Whitney: I also liked Nadia telling Thony what she’d done and what the consequences could be. It was vital for her to hear that.

Laura: I appreciated the showdown between the ladies and Nadia telling Thony she needed to think of someone besides herself. Nadia has become fierce and feisty.

Over to you, Cleaning Lady Fanatics. Are you tired of the way Thony has been acting? Let us know in the comments.

Remember, you can watch The Cleaning Lady online, right here via TV Fanatic.

The Cleaning Lady airs on Mondays on FOX.

Amy Robach And T.J. Holmes Seen Together In L.A. After ABC Exit
Lifetime’s ‘The Other Black Girl’ Stars Garcelle Beauvais
The Rookie – Death Sentence – Review
The Ark’s Cast and Crew Gave Us the Exclusive Scoop on SYFY’s New Series
The Watchful Eye – Episode 1.05 – Stairway To Eleven – Press Release
Follow us on Facebook
Follow us on Twitter