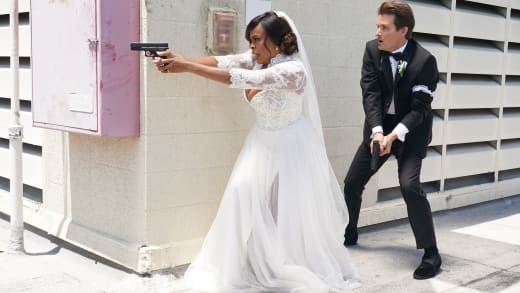 With The Rookie: Feds Season 1 Episode 2, the show has started to find its footing and establish its characters’ storylines. It also has begun to feel exhibit behaviors expected from The Rookie universe.

Yes, this installment feels like a significant upgrade from the series premiere. In my opinion, they should have started with this one.

Even better, it was long on jokes, action, and progress in terms of the narrative.

Whatever it is that’s going on with Brendon and Santiago’s movie is a liability to the team, especially if it distracts him so much during a shootout. Speaking of the shootout, It was a perfect opening. It felt rather grand, which is something you would expect from The Rookie.

The direction the writers decided to take with Brendon’s dilemma is good. I was getting tired of hearing about this guy’s feelings about his past. If it serves the unit and solves a crime, I’m all for it. However, he has to decide soon because these conflicting emotions are exhausting to watch.

It’s not a job you can afford to be all up in your feelings, especially in the middle of something. There is no shame in admitting that he can’t hack it and going back to acting.

Next time, you’re wearing a wedding dress. This was not tactical.

Brendon is also coming off as an idiot. That thing with the governor didn’t inspire much confidence in him. Laura sure does have her work cut out for her.

The case of the week was a significant improvement from the previous one, as well. It kept me invested in the story and glued to the screen.

Simone used not only her charm to win over Anton, but also her sexuality. Is that allowed? How did Anton fall for that?  Either he is a big-time idiot or we are because I found it hard to believe that a guy caught in possession of drugs could be worked like that.

Did he expect to hit a home run with Simone?

If there is anything to admire, it is Quincannon’s dedication to escaping the law. It wouldn’t take much to convince me that what happened here was real. Criminals have become innovative with technological change.

I like that Cutty is here to act as moral police for Simone. It is very easy to get sucked into the policing rabbit hole such that all one sees is criminal behavior, but what did he expect? That she would never arrest someone, least of all a black boy from the neighborhood? He had drugs on him, for Pete’s sake. And there was a witness.

We also had a guest appearance by Lucy Chen and Tim Bradford. Though it wasn’t clear why they came, we saw how similar Laura and Tim are to each other. They are the opposite gender versions of one another, and it was hilarious how they looked at Lucy and Brendon mockingly.

Speaking of Lucy, does she have a crush on every basic attractive guy she sees? I get that Brendon is a celebrity, but still. She had that familiar look when she was with Tim and when she met Chris. In The Rookie Season 5, she’s torn between Tim and Chris. Now she’s adding another guy to the equation?

Brendon: Probie. I hate that word.
Lucy: Yeah. LAPD trainees are called boots. You know, anything to put us in our place.
Brendon: So you’re not a …
Lucy: … a rookie? No. Not anymore.

I am team #Chenford, so don’t go disappointing me, Lucy.

Another thing that strained believability was that Brendon’s acting method was that effective. If done differently, it’s believable that they could have figured out where Quincannon lives, but how they did it is unlikely.

Fake Quincannon, who has never practiced or used that method before could suddenly close his eyes and figure out which highway they took and what the air smelled like? No, I don’t buy it.

But what did work was that the episode hit the bulls’ eye with the emotions and bonding of the characters, and I’m glad they did it sooner rather than later.

Carter coming clean about his involvement in the plan to sabotage the unit bonds him and Garza, and it shows that he believes in the unit, making Garza trust him more.

The dynamic that I am most stoked about is that of Elena and Garza. In The Rookie: Feds Season 1 Episode 1, their banter was surprising. That was no way for someone to talk to their boss — unless your boss is your uncle, and then you get a pass.

The jokes between them are some of the funniest.

Elena: The Tio I know loves potatoes and hates any food that’s green, What the hell is going on?
Garza: Alright, alright. Look, you just can’t tell your mom, okay? I have been dealing with some heart issues recently but it’s no big deal. I’m just tryna clean up my act
Elena: How broken is it?
Garza: Just a little. I’m on medication. You don’t have to worry.
Elena: Look, I’ll deny this if you tell anyone but you’re my favorite uncle and I’ll be sad if you kicked the bucket

Laura and Brendon also bonded on their blunt openness with each other. If the writers don’t put some weird sexual tension between them, this will be a beneficial relationship for both of them professionally.

Simone and Cutty made up at the end. That was all well and good, but I’m of the mind that their relationship is unhealthy.

It is a ticking time bomb. How much longer before there’s an argument they can’t dismiss? How long before their already strained relationship encounters something that makes compromise impossible for both of them?

It’ll be heartbreaking to watch if that happens, but the safest thing for both is for Simone to move out and find her own place and for Cutty to act like he isn’t disgusted by the simple idea his daughter is a fed.

When Simone’s love life starts heating up, and it will, they will never be able to live down the awkwardness.

Overall, this was a great episode, and I hope they continue blowing our minds with what will come next.

Do you think this was much better than the premiere? Do you also have concerns about Cutty and Simone’s living arrangement?

Let us know in the comments below.