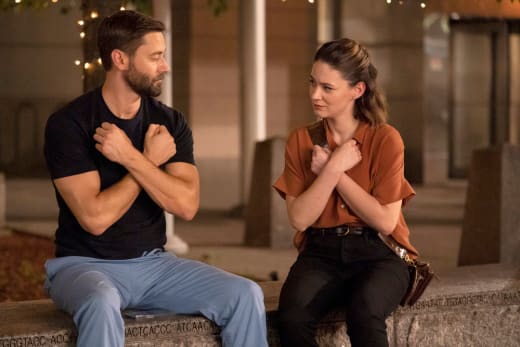 What a deeply disturbing hour that made one feel icky.

The series loves to explore all types of subjects, but the exploration of child marriage on New Amsterdam Season 5 Episode 3 goes in the books as one of the most provocative topics yet.

Everything about the hour was unsettling, and delving into it doesn’t quell that feeling at all.

We tuned in for New Amsterdam, but by the end of the hour, it felt like something from Law & Order SVU.

Anyone familiar with those types of series probably already had a hunch that the young girl who could barely speak because of the trauma of what she endured, carrying around an actual bouquet rather than petals, was the bride at the wedding, not a flower girl.

But the path toward the characters making that discovery was a long, windy one. Not only were they attempting to understand why Lily fell into a catatonic state, but they needed to understand how a fire broke out at a wedding.

It brought about all sorts of cases and injuries, from the husband with his wife’s heel in his back to the patient who desperately needed a rare blood for a transfusion.

It brought about all sorts of complex cases and chaos that put all the primary doctors to work.

Iggy had to step up in a big way to break through to Lily, who, at some point, resorted to only repeating what he said. When he opened up to her about his family and presented her with the dolls to use to communicate, we got the answers we needed.

Guest-star Talia Cuomo, who played Lily, gave a chilling performance. Not only did she appear like one of those creepy children in a horror movie or something, but she locked you into her trauma along with her.

It was hard to take your eyes away when she was onscreen, and she had you clinging to every moment until the inevitable reveal.

Iggy was speechless when she realized that Lily was the actual bride. It’s not often that anything throws him off, but that did.

And it meant he had to share the news with Max and Wilder. Their portion of the case was fantastical and surreal. Since they’re trying to go full-speed ahead with the teased romance, it makes sense that they keep thrusting them together professionally and personally as much as possible.

They were both on the case when finding some Lutheran B- blood for their patient. The more hands involved, the better.

But the only thing more ridiculous than them orchestrating a plan to fly to Bermuda in search of a donor who had Golden blood, known as Rh-Null, is that they both hopped on that flight along with Ben.

Our job is not to judge lives, it’s to save them.

Why did it require both of them? It seemed like a waste and detrimental to the hospital that they spent three hours on a plane flying to and from Bermuda.

But things got even more cringe-worthy inducing when they were in Bermuda. It’s quintessential for Max and Wilder to go to whatever lengths possible to save a life. We know that and how it blinds them.

But goodness, did the optics of that whole ordeal not sit well.

They knew the blood bank couldn’t release the information about the donor, but it didn’t stop them from harassing and attempting to charm the man anyway.

And even after he turned them down because of the blatant violation, we find out that Wilder, playing into how differently-abled individuals can have stronger senses or other ways of doing things that can be an asset, saw the donor’s information through the reflection in the glass.

Using that, they rushed to this woman’s home to guilt and harass her, who we later found out was the donor, into giving up her blood to save a life.

Make no mistake, by now, I’m as tired of discussing the specific irksome optics about some of these plots and such as others may be reading about them.

But the sheer violation Max and Wilder committed — their audacity in approaching someone who has spent their entire life serving as a human pin cushion for the greater good and trying to twist her hand into doing it again for their cause was enough to leave a person speechless.

The groom, the man we’ve been flying through countries to save, it’s a child wedding.

The dark medical history of how POC, especially Black individuals, were experimented on, used, and abused for the advancement of science remains a stain in the field that will never go away.

This woman is blessed or cursed to bleed herself dry to save other people literally; this responsibility and obligation are put on her as a holder of the Golden Blood type, which only less than 50 people in the world have.

She said everyone always comes knocking, and there’s never a moment when she isn’t getting pumped for blood until she’s too weak even to move.

To approach a woman like that as if they’re not literally giving their life force beyond normal expectations and act as if it’s okay to push her into doing it one more time for their patient is simply madness.

Max and Wilder were all types of out of line with their approach in the first place. But to then discover that this woman, who was guilted into giving more of her essence, did so for a freaking pedophile who would’ve been better off dying on the table?

It was infuriating. Wilder and Max hid behind the Hippocratic Oath when it came to saving this man regardless of what he had done, but HIPAA went out the window when it came to sparing this donor and respecting her privacy.

The case was already icky, but the notion that we were supposed to root for Max and Wilder before we found out the truth didn’t land well either.

Naturally, the case left all the doctors in a terrible place. They had to forgo their ethics and morals to do their jobs. It seems the only moral hero of the hour was Lily’s brother, who started that smoke bomb to save his sister.

The news that the family wouldn’t face any repercussions because no laws protected Lily was sickening. Although, they got a few of the facts about the different states and laws wrong, specifically with West Virginia.

By now, the case-heavy installments and medical stories are much are the series’ strongest suit these days. The personal arcs are generally rough.

The chemistry between Max and Wilder has been building, and they’re going into overdrive to set this pairing up. On paper, they work, Eggold and Frank play off one another nicely, and there’s nothing particularly wrong with them.

But the timing of it remains frustrating and the biggest hurdle to overcome no matter how objectively appealing Goodwild/Wildwin can be.

It feels like a lot of copy and pasting is taking place to sell the narrative, which is generally odd. Max’s ongoing attempts to learn ASL remains sweet and awkward. It at least keeps Ben from staying a third wheel.

Lauren and Floyd’s arcs are confounding.

Again, what is the exact reason why Lauren has to stay with her sister, who is a walking, talking trigger that leads to Lauren slip-sliding in her sobriety?

It does not make any sense why Lauren is crashing at a small apartment where drugs and alcohol are everywhere; with a sister who is equally as troubled is the best option for Lauren when she could stay at a hotel or rent a new apartment or SOMETHING.

And why is Floyd diagnosing his father with Bipolar instead of encouraging this man to see a professional? Floyd had one stupid conversation with Iggy, and he’s concluded that Horace is bipolar, and that’s the reason for every screwed-up thing he’s ever done in his life.

Floyd sat down with his mother and sister, who were so tired of his bullcrap that it was a mood and made it seem like Horace was mentally-ill, and that’s why he was such a crappy father and husband. And he expected them to show Horace grace.

But Floyd has NOTHING to go on with this! Then, he took it a step further, spoonfed Horace this crackpot diagnosis, and gave him an out for every despicable, crappy thing he’s ever done.

Horace really thinks he can justify every bad thing he’s done because he’s “bipolar.” And thus, he doesn’t get to take any accountability for anything.

Not only is that absurd, but it’s offensive. Millions of people are mentally ill, but it doesn’t mean they have free reign to be crappy people. They can’t hide behind that.

Floyd: I think you might be Bipolar.
Horace: Bipolar?
Floyd: Yes, and I think you’ve been living with it your whole life.

It’s such an awful, persistent stigma that it’s messed up that Floyd has even given into it.

Over to you, New Amsterdam Fanatics. How did you feel about the child bride case? Are you enjoying the Max and Wilder chemistry? Sound off below.

You can watch New Amsterdam online here via TV Fanatic.