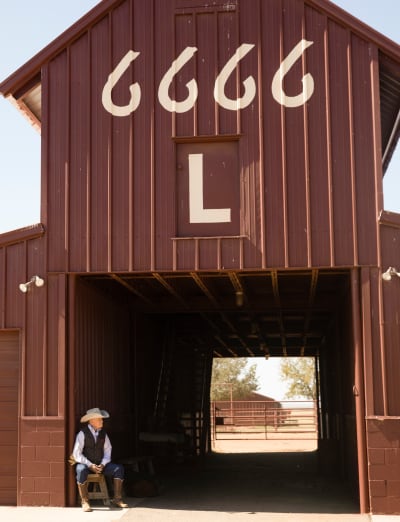 We’ve just blown past the halfway mark, and it feels like we’re standing still.

Yellowstone Season 4 just isn’t delivering the same levels of thrills and excitement that came before.

Yellowstone Season 4 Episode 5 had too few bright spots, but we’re going to dive into them nonetheless!

I know that I’ve been harping on this since the premiere, but can we please say goodbye to Jimmy already?

Even worse, the scenes are boring. Nothing happens. We still know NOTHING about the 6666 ranch and what the hell Jimmy will be doing there.

But the worst part is that Jimmy seems like more of a dolt than he ever was on the Yellowstone. Sure, he had a lot of false starts on his journey to being a worthwhile wrangler, but he continuously showed a lot of heart, and that much of his idiocy was because he hadn’t had the benefit of any training.

I hope the good Lord gave you a big dick, Jimmy because he shorted you on brains.

But now, Jimmy seems like an airhead without any chance of recovery. It doesn’t make sense, and his arc is moving backward.

But since we’re still in the dark about the 6666, that means we’re stuck with even more of these awful excursions away from the people we love.

Another storyline that needs to disappear is the animosity between Lloyd and, well, everyone. He got laid, and that was, apparently, a good time for him. Now, Laramie has moved on.

But somehow, the man we once knew as a wise sage amongst the wranglers is letting it drag him down to the point that his presence on screen isn’t welcome.

If you had told me two years ago that was a possibility, it would have seemed laughable. But here we are.

Rip feels the same way, and it’s taking everything he’s got to hold back his desire to use Lloyd as a human punching bag. Frankly, I wish he’d just wail away on the man every chance he gets until Lloyd’s head pops out of his own ass.

When Lloyd spotted Laramie on top of Walker, why on earth did he walk TOWARD it instead of walking the other way? Walker has left the bunkhouse due to his beef with Lloyd. Lloyd has to give a little, too.

Walker came on the scene as his own brand of annoying, but he quickly lost that veneer. He’s not a bad guy, and to hold against him that he’s screwing Lloyd’s former lay is not scoring Lloyd any points.

Laramie has to go. Given Walker’s preference to sleep alone by the fire than in that trailer with Laramie, Walker might let her go without a fuss.

It would be easier for him to do that if he wasn’t painted as the black sheep. He’s like the Jamie of the bunkhouse.

He’s gotten a bad start and can’t shake it. If anyone was going to head off to 6666, I wish it had been Walker. He’s easy on the eyes, and since he doesn’t whine like Jimmy, it might have been a little more fun than what we’ve got of the 6666 so far.

While we’re on the subject of annoyances, it would be remiss to hold back on Kayce’s family. They’re gone. Monica is looking at houses. She seems oblivious to the small smile that Kayce has plastered on his face showing his waning interest.

I can’t be the only person who sees Kayce’s smile as a kind of regret for what’s to come. As Monica prattles on about houses and Tate FINALLY chows down on some breakfast with relish, Kayce seems resigned to the fact that his nuclear family will never be what he’s dreamed.

Kayce thought he could just walk away from the family. Recent years have proven he cannot. He also hoped that Monica and Tate would be a part of it once he made his way back to the family. Now, that is no longer the case, either.

Kayce has to choose because being half and half in this world doesn’t cut it. My gut says that he’ll choose the Yellowstone.

Meanwhile, after a beautiful moment between brothers that led Jamie to the awful discovery that Garrett was behind the attack on the people he loves, Jamie is again at a crossroads.

That he came so close to blowing the lid off of Garrett’s duplicitous nature only to be silenced is nervewracking. Is there anything more annoying than his progress being interrupted by Christina and their baby?

I don’t think so, and if you watch Yellowstone online, you agree.

The irony is that she cannot stand John and the Duttons, practically classifying them as evil. Would she turn the other way since Garrett is a conniving criminal who ordered hits on the family? Is THAT considered a good evil because his target was the Duttons?

From what we know of the wench, it wouldn’t be surprising.

And we have to reexamine the Season 4 trailer since it shows the family, with Beth leading the charge, turning on Jamie yet again.

Getting blindsided by his child will pull the rug out from under his anger at Garrett, and Jamie will pay. It wouldn’t be at all surprising if he pays with his life, and Jamie doesn’t deserve that.

Beth cannot carry the show, but she’s doing it.

John: Not hungry?
Beth: Nuh-uh. I’m intermittent fasting.
John: What’s that mean?
Beth: Nothing but coffee and cigarettes till noon, and then I can eat what the fuck I want till I start drinkin’ at six.
John: Well, I’d love to meet the doctor who came up with that diet.
Beth: I’ve adapted it to suit my lifestyle.

It seems misguided that she’s taken the job with Market Equities to run it into the ground. Will a job in which she pulls no salary, even if she’s President of the Montana Division, give her that kind of leeway?

She got to fire Bob, and she needed that. But what will she do with Schwartz & Meyer now that he’s gone? It doesn’t really matter.

Like many other stories, I have no idea where her connection to Market Equities will go. Will they need a presence in Montana if she’s president? Will this be another dead-end story?

I could have done without the anatomy lesson, but that’s OK. I’ll work that shit out in therapy.

The best of the best for “Under a Blanket of Red” comes from Beth and John. The opening scene showed a man who has been through the wringer, and while it seemed unclear as it unfolded, the point was that he’s lonely.

Thankfully, he’s got family, and in particular, Beth, to keep him whole. They’re kindred spirits, and as much as John can get uncomfortable with his daughter’s openness, the relationship they’ve built is one-of-a-kind, just like Beth.

Beth: What are you doin’ today?
John: Battling my conscience.
Beth: Well, I’d offer my advice, dad. But I’ve never been in that situation.

Beth is quite troubled, so it makes sense that things with Carter have only added to her strain. She might have been treating him as a project, but her heart was in the right place. She needs something to love that needs her attention.

Right now, John is that person. Their bond continues to grow, and when they’re in the same room together, it feels like all is right with the world.

Although scenes like that seem lowkey on the surface, there is so much emotion and insight boiling under the surface that feeds into the very best of what Yellowstone has to offer.

If we’re not going to see constant action, then we should be getting deep, meaningful scenes like those shared by Beth and John.

Heck, I almost forgot that Piper Perabo joined the show. Why get excited? Guest stars tend to come on the scene and disappear without making an impact. How on earth will an environmentalist add to the discussion?

So I guess the only question is how cute does an animal have to be before you care if it dies to feed ya.

If they’re about to get preachy, that will do Yellowstone no favors.

Taylor Sheridan a platform for preaching on The Mayor of Kingstown. My preference is that he leaves it there.

What are your thoughts?

Let me know if you’re enjoying this season or if you’d prefer a little more, well, anything.