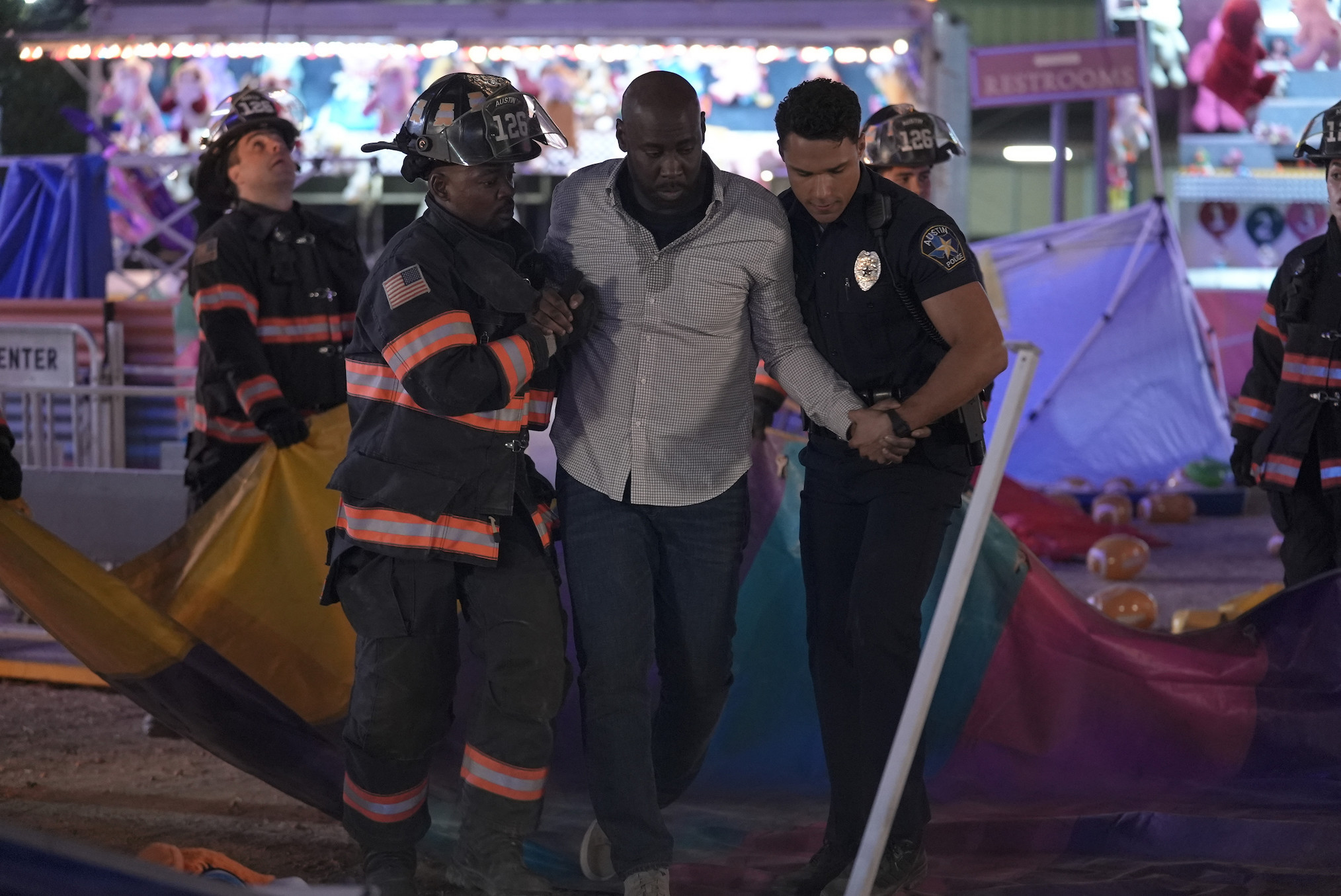 [Warning: The below contains MAJOR spoilers for the 9-1-1: Lone Star Season 4 premiere “The New Hotness.”]

Captain Tommy Vega (Gina Torres) has a new love interest in 9-1-1: Lone Star Season 4, and it comes with a bit of an angelic twist.

Not only is D.B. Woodside, who starred the angel Amenadiel on Lucifer, playing the new love interest, who is rescued twice in “The New Hotness” by the 126, but Trevor’s also a reverend, as Tommy surprisingly learns at the end of the episode.

So does that mean an end to their relationship before it could begin? Torres offers a tease about what’s ahead and talks about working with Woodside again (after 24, Suits, and Pearson).

First of all, everyone singing in the church was amazing.

Gina Torres: Wasn’t that fun? Wasn’t that a nice little respite from all the anxiety and chaos?

Yeah. But then there’s some more anxiety and chaos for Tommy when she realizes that Trevor’s the new reverend.

So at that point, what does she think the future could hope for them? Anything? Is she planning to just completely forget about a date?

This does reveal itself as the season rolls out. At that moment, I don’t think she really sees how a pastor might fit into her life.

And it wasn’t at all what she was expecting.

No, no. Not even close. When we pick Tommy up this season, she’s really just looking forward to exploring what this part of her life is gonna bring. She’s not really interested in a committed relationship. I think she wants to just have fun for now and date and get back to herself. And that’s tricky when you’re dating a pastor.

Going back to a bit earlier, what is it about Trevor that attracts Tommy enough to give him her number and say she’s good with the date date? Because it seems like the universe also kind of kept throwing them back together.

I know, we save his life twice. I do believe that she feels like fate has lent a hand in this. And you know, he’s fine. [Laughs] So that doesn’t hurt. But I also think it’s his love of his daughter and his relationship with his daughter and her to him, which I think gives her a clue into the kind of man that he is. Also at that point, it kind of feels like they might be at the same point in their lives too, before she knows that he’s a pastor. Because he was talking about his wife having left and she lost her husband.

Yeah, there’s a kinship there, for sure, that they find themselves newly single.

I have to say how much I love the casting of D.B. Woodside as Trevor. Talk about working with him again.

Yeah, D.B.’s great. I was so happy that we got him, that he actually agreed to do the show, that he had time to do the show because he is a busy man. We get together and it’s easy. It’s just easy. He’s a wonderful actor. He’s incredibly generous and he’s smart and he’s fun and he’s funny and we just have a good time.

You were talking about where Tommy is in her life right now, but is it that Trevor came into her life at the right time? Could she be ready for something with someone else?

We’re still trying to figure out if Trevor didn’t show up at the right time. I think she’s open to possibilities. I don’t think she’s put a name to it. She had a beautiful marriage, so I believe that she’s looking forward to exploring what it is to be Tommy Vega woman as opposed to Tommy Vega mother, Tommy Vega paramedic, Tommy Vega wife. What’s important to her? I think a lot of women, as their children get older and don’t need them as much, if they find themselves single again, whether it’s that they’re widows or newly divorced, you have to get back to you and what makes you happy and what makes you tick during those times when you’re not in service to everybody else. She’s there. She’s in that place in her life.

So are we going to see who she is when she’s off shift?

Yeah, she’s trying to figure all that out, absolutely. We saw Tommy telling Grace (Sierra McClain) about Trevor — I like that moment in the church — and I’m assuming it’s just a matter of time before Judd (Jim Parrack) knows. What are we going to see from those three when it comes to Trevor?

Oh, Judd, of course he does. Poor thing. Yeah, Grace is my best friend, so you’ll see all of that. You’ll see her trying to work it through out loud with Grace and trying to just get a little perspective on everything that’s happening, because it’s one thing to say you’re ready and then it’s one thing to be ready and, and I think that’s where we entered the situation. She’s like, OK, I think I’m ready. And then, oh wait, what? What’s happening here? It’s all a lot all at once.

What else is coming up for Tommy?

We’re about halfway through the season. We’ve got lots of rescues coming up. The good news is that we are getting to spend time with a lot of the other characters as well. Owen’s [Rob Lowe] got a storyline that’s gonna bridge a few episodes, as does Tarlos [Ronen Rubinstein and Rafael Silva], as does Marjan [Natacha Karam]. So there’s gonna be a lot for audiences to chew on this season.

How much is Tommy going to be involved in planning the Tarlos wedding? Because I feel like everyone’s gonna have an opinion.

As far as I know, she’s gonna show up, have some cocktails and hors d’oeuvres and cheer that we got them there.

Oh, everybody leans on Tommy.

What was your favorite scene to film so far from this season?

There is an episode coming up that that goes into the relationship between Tommy and Trevor’s daughter, which was a lot of fun to shoot.

What about your favorite scene to film from the premiere?

I love the movie-making magic, so I really loved walking through — and it’s sort of non-eventful as you’re watching it, but for myself, one of the great things about doing what I do is walking onto a set and seeing how the set decorators and the designers have created this world. And so the way they created this carnival, we start and it’s daytime and it’s raining, and then we take it into the nighttime and all the lights are lit up and you see the rides and it’s wonderful. You’re just right there.