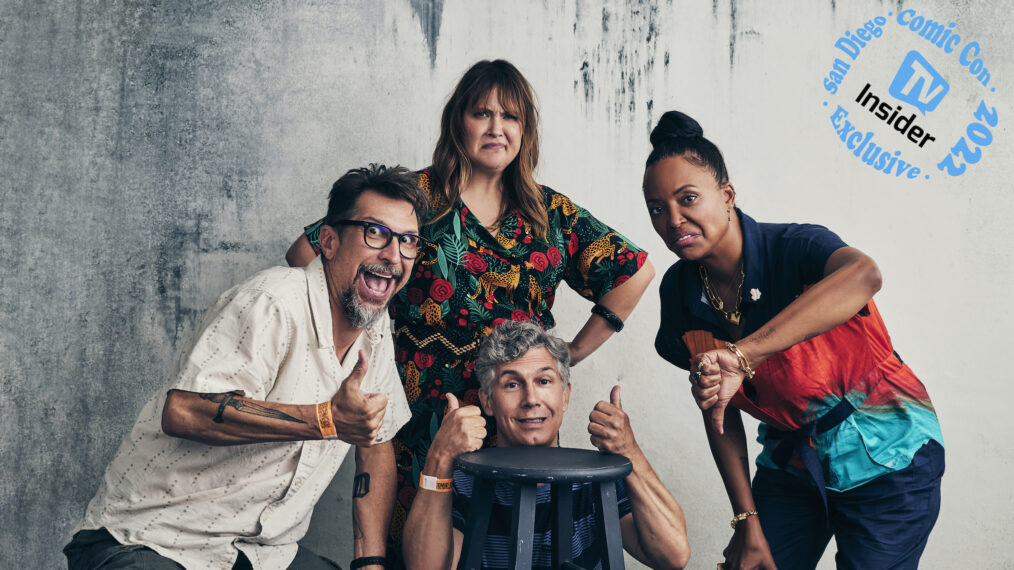 Archer Season 12 ended with a certified tear-jerker of a tribute to the late Jessica Walter. The cast and executive producers of the FXX hit animated comedy sat down with Emily Aslanian at the TV Insider and TV Guide Magazine studio, sponsored by Hollywood unBranded, during San Diego Comic-Con 2022 to chat about the show, kicking things off with the story of how Walter’s Archer tribute came to be.

“Casey [Willis] and I had planned out that finale way in advance, because Jessica passed in the middle of the season,” Matt Thompson said of the touching moment. “And so, we had to reorganize the season to where you felt like she was in the episodes, but we actually kind of retro-scripted them. And then, we had an early idea for the finale, and that came together really nicely.”

“I knew it was hitting the right tone that we wanted to hit when I described it to someone, and over the phone they were crying,” added Willis. “I was like, ‘OK, so this is gonna be good. This is gonna be a fitting tribute.’ Just to have Ron [Leibman] in there as well, who played Ron Cadillac on the show, lucky.”

“Take care of yourselves, especially you my Sterling, because wherever I am I’ll be watching over you.” #ArcherFXX pic.twitter.com/8vochHSq4f

In the Season 12 finale, Walter’s spy agency chief Malory Archer saved Sterling Archer (H. Jon Benjamin) from kidnappers in a swift heroic moment. But right after the victory, her agency was acquired by IIA and Malory disappeared with only a brief, but emotional, note for her son.

“Do you remember what I told you on your very first day of training? You probably don’t, but it was, ‘Always know where the exits are.’ And with all the chaos and confusion of late, I thought I would fix to make my own exit, in my own time, on my own terms and in a way that I could never be found by my enemies, or all my lovesick paramours who are literally countless,” it said. “So I’ve decided that it’s time to pass the torch; try not to burn yourselves with it.”

“I know my decision may be abrupt, but we don’t always get to choose the perfect moment,” the letter continued. “Take care of yourselves, especially you, my Sterling, because from wherever I am, I’ll be watching over you. Love, Mother.”

The episode ended with Malory and her husband, Ron Cadillac (voiced by Walter’s actual husband, Ron Leibman, who died in 2019), relaxing on a secluded beach. “And how is my lady love?” he asked. “Infinitely better now,” Malory replied.

What will Season 13 of Archer look like with the new management? The cast teased what to expect.

“We’re all competing. Fabian has decided to put us to our paces and demonstrate who has the capacity to potentially run the entire agency,” Aisha Tyler (Lana Kane) said. “I can’t give it all away, but there may be other nefarious plans at work. And we’ve actually always been in a combination of competition and cooperation as a team. Everyone’s kind of running in the door at the same time, like the Three Stooges. So it’ll be really interesting to see how this all shakes out this season.”

“It’s new stuff with all the same a**holes you’ve always loved on Archer,” added Amber Nash (Pam Poovey). According to Lucky Yates (Algernop Krieger), the team will be “fighting the man!”

“There’s a man worse than our man,” Yates added. Said Tyler, “There’s just a man that is equally evil to us, but since it’s our team, he’s bad and we’re good.”

Tune in for the rest of the classic Archer cast banter in the full video interview, above.

Kaitlyn Bristowe reveals what she’d have done different as host of Gabby Windey and Rachel Recchia’s ‘The Bachelorette’ season
‘Reservation Dogs’ Star Devery Jacobs on Writing for Season 2 & What’s Next for Elora
‘Chesapeake Shores’: Will Jesse Metcalfe Return as Trace in Final Season?
Kevin Can F**k Himself – Episode 2.01 + 2.02 – Promotional Photos
‘Alchemy of Souls’: Renewed for Season 2 at Netflix and What We Know So Far
Follow us on Facebook
Follow us on Twitter