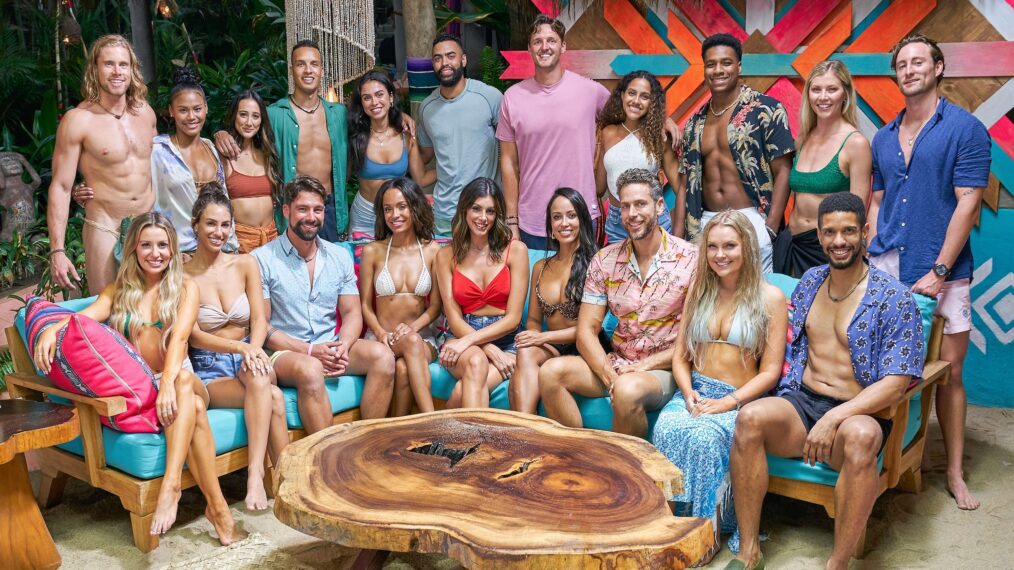 [Warning: The following contains MAJOR spoilers for the Bachelor in Paradise Season 8 premiere.]

Bachelor in Paradise is back, and it can’t stop talking about crying. The intro for the Season 8 premiere, which debuted Tuesday, September 27 on ABC, focused on the tears and heartbreak. When host Jesse Palmer appeared, he made jokes about the emotional turmoil. And turmoil it delivered, as a handful of arrivals to paradise had cast members thrown for a loop.

Lots of faces from Clayton Echard and Gabby Windey and Rachel Recchia‘s seasons are part of this season’s cast of The Bachelor spinoff. And the arrivals range from chill to steamy to tense. Serene Russell (Clayton’s season of The Bachelor), is eager to meet Brandon Jones (Michelle’s season of The Bachelorette). And in true BiP fashion, in comes Brandon moments later. He also immediately set his sights on Serene, b-lining for her the second he arrives. They set off on a private moment, and it takes no time at all for their connection to lead to the first kiss of the season. Other cast members start shipping them immediately, betting they’ll get engaged.

Old rivalries are unearthed when Kira Mengistu arrives and interrupts Jill Chin and Romeo Alexander’s catch-up moment (which, should be noted, was awkward to start with); Jill and Romeo were attempting to reconcile after drifting apart. In walks Kira, whom Jill also used to be close with, and she comes in swinging by taking Jill’s drink. Not long after this weird moment, Jesse calls everyone to gather.

The same structure as always applies. If you’re not in a committed relationship and you do not get a rose, you will be going home. For Week 1, the guys have the roses, leaving the women on the chopping block. The men and women split up, and in their guy-and-guy and girl-on-girl talks, everyone agrees that initiative is sexy. The women want to feel pursued, as do the men. But most of the cast have no reservations making the first move on Night 1 as they mingle at Wells Adams’ bar. The first date card goes to Andrew, who takes a shot at falling in love with Teddi. Their date leads to the premiere’s next first kiss, and other already-forming couples seem to be Genevieve Parisi and Justin Glaze and Sierra Jackson and “zaddy” Michael Allio.

Lace Morris, however, isn’t having as good of a time. She calls BiP Season 8 “the most boring season” ever, resenting not being pursued by any of the men and feeling left out by the women. “I feel hopeless in Paradise right now,” she tells the cameras. “I’m gonna start being fake as f**k.” First step is pretending it’s her birthday when she gets back to the bar. She uses the real cake for her fake birthday as an icebreaker to get a moment alone with Logan Palmer, the one guy she had her sights on earlier. But it crashes and burns when he forgets her name. She later shares a smooch with Casey Woods.

The main drama comes from Jill, Romeo, and Kira. Later on in the night, Jill and Romeo have a chance to continue their talk from earlier Kira-free — or so they think. After Jill and Romeo kiss and establish their interest in getting to know each other more, Kira comes waltzing in, telling the cameras she didn’t come to paradise to “make good decisions.” Jill had twice mentioned that Kira goes after men she’s interested in, and Kira tells the cameras she has been intentionally interfering with Jill. But she pretends the opposite in conversation with Romeo as Jill tells the other women about her second interjection.

Romeo puts his money where his mouth is, telling Kira that he’s connecting with Jill and is actively pursuing her. He asks Kira to “let me pursue Jill in peace.” Kira tells the camera she “didn’t do anything to deserve this.” She says in solo interviews she feels played, adding she hates them both, and then confronts Jill on the beach accusing her and Romeo of gaslighting and slut-shaming her, neither of which happen in the episode. Tears ensue. BiP is back, indeed.

While there is no Rose Ceremony in the premiere, Victoria Fuller from Peter Weber’s season does appear right at the end of the episode. What did you think of the premiere? Sound off in the comments, below.

‘GMA’ Michael Strahan Owns Yelling At Rosie O’Donnell With Love
See How the ‘Grey’s Anatomy’ Cast Has Changed Since Their First Seasons (PHOTOS)
‘NCIS’verse Crossover Promo Teases Action & Danger of Event (VIDEO)
‘Troll 2’: Producers and Director Tease Sequel to Netflix’s Monster Movie
Genevieve Parisi: I fell in love with the wrong man and ignored Aaron Clancy’s red flags on ‘Bachelor in Paradise’
Follow us on Facebook
Follow us on Twitter