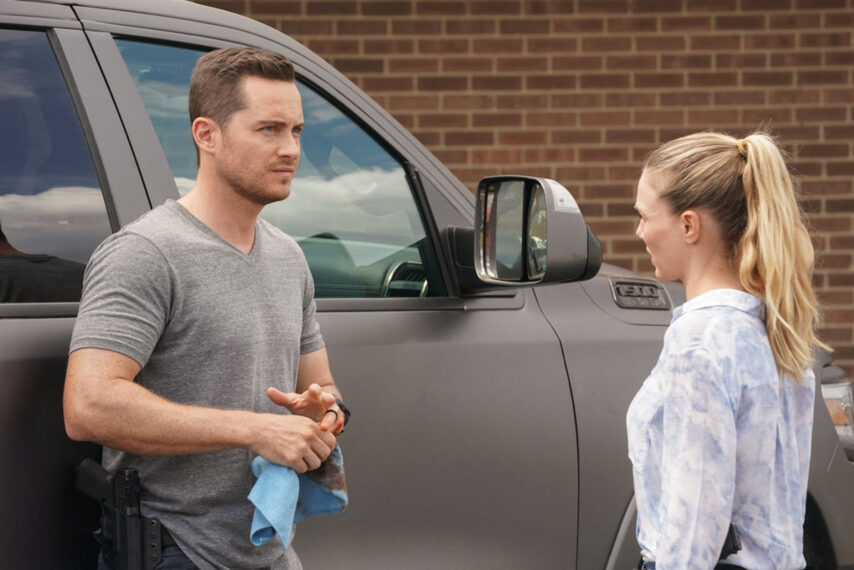 Intelligence is about to say goodbye to a detective who has been with Chicago P.D. since Fire introduced its characters for the spinoff. While we wait for the day Jesse Lee Soffer’s Jay Halstead is no longer with the team, we’re preparing ourselves with everything we know about what’s to come. (His final episode has yet to be set; we just know it’s in the fall.)

The Season 10 premiere did seem to set up a potential exit for Jay, with tensions continuing to rise between him, his partner and wife Detective Hailey Upton (Tracy Spiridakos), and their boss Sergeant Hank Voight (Jason Beghe). And what happened with Voight’s CI, Anna, is just part of it. Voight insisted he didn’t blame Upton for having to shoot Anna. “You are not my keeper, and you’re not each other’s. I’m making choices you don’t like, that is on me. He’s making choices you don’t like, that is on him, him alone. We gotta be done with all of this, now. If it ever shows up on the job again, the three of us, we’re not working together anymore, understood? It’s that simple,” he said. That could have easily set the stage for Jay to leave Intelligence — whether it’s of his own volition or not — but is that too easy?

While Episode 2 is a big “Burzek” episode, as showrunner Gwen Sigan told TV Insider, the logline for the following week’s, “A Good Man” airing on October 5, reveals there’s some juicy stuff coming for Halstead and Upton: “The team investigates a string of brutal pharmacy robberies and Halstead connects with one of the victims about their Army careers. Upton suspects there is more to the story and confides in Voight.” That, too, could easily be part of his exit storyline, going back to his time in the Army.

So far, what we know is that Sigan has said that the tension we saw with Voight, Upton, and Jay will “play out at the front end” of Season 10. She wouldn’t say anything specific about how Jay will be written out, but “it’s going to make sense to the fans when they see the episode that is his exit. We wanted it to be really a showcase for Halstead and who he is and what Jesse has meant to this show.” She called Soffer’s performance in the episode “one of his best.” And while they’ll be dealing with how all the characters handle it “as honestly as we could,” the showrunner continued, it’s Upton who will obviously be feeling it the most, as “it really puts her in some very emotional and interesting scenarios as the season continues on.” We’re expecting some very emotional scenes between the two of them in his last episode, whenever it might be.

After he’s gone, she’s “left in this, I would say, almost a vacuum, this emptiness of how do you move on? What the hell does that look like? In so many ways, he’s the love of her life, they’re partners at the job. They almost can always think and know what the other person is thinking. And so to suddenly have that be gone and for Upton who perhaps is not very well-versed in how to deal with her emotions in always a healthy way — she’s someone that tends to go towards avoidance — it’s going to all hit a head and come to a point where we’ll see it and we’ll see it come out on the job and in cases how she deals with being alone,” Sigan previewed.

We’re also expecting at least one great scene between Jay and Voight in his final episode, considering the effects the former’s exit will have on his boss. “A lot of Halstead’s personality and perspective bled into Voight and vice versa,” the showrunner noted. “Now you pull a piece of that away. Voight’s going to be in a very different spot and there’s going to need to be somebody that comes in and kind of counterbalances him and can provide that foil to him because otherwise Voight can be left to his own devices, which are not always great.” We’ll have to wait to see who takes over that role for the sergeant.

For now, all we can do is tune in and try to pick up any hints about how Chicago P.D. will be saying goodbye to Jay Halstead.

Watch Law & Order: Organized Crime Online: Season 3 Episode 9
The SpoilerTV Favourite TV Series Competition 2022 – Round 3B
‘Wolf Pack’ Sneak Peek Teases a Wild Animal to Hunt (VIDEO)
Amy Schneider Reveals ‘Jeopardy!’ Gift From Ex-Champ & Surprise Return to Show
USD POLL : Would you like to have seen a Season 3 of Fate: The Winx Saga?
Follow us on Facebook
Follow us on Twitter