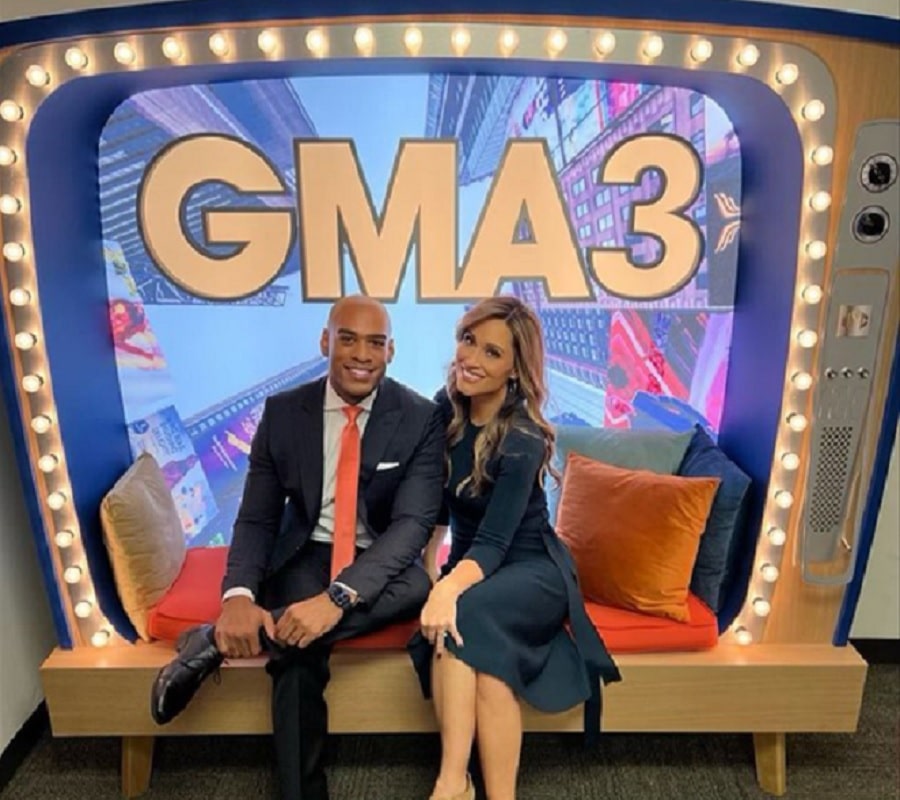 GMA3 viewers love Rhiannon Ally and DeMarco Morgan’s on-air chemistry and friendship behind the scenes. They want the fill-ins to join the show permanently. During Amy Robach and TJ Holmes’ suspension, the two filled in for them. It appears that the two have a great friendship behind the scenes. Keep on reading to learn more and see what the fans say.

ABC did the right thing when they found Rhiannon Ally and DeMarco Morgan. The two have become good friends. They’re supportive of one another on social media. Rhiannon shared an Instagram post dedicated to her family. She admitted that she was excited to spend the weekend with them.

She posted a photo of herself with her husband Mike Marza and their three kids. They were dressed up in Kansas City Chiefs merchandise. “Headed to our 5th straight AFC championship!!!” Rhiannon Ally captioned the Instagram post. DeMarco was the first in the comment section at the time.

He responded with the red heart emoji. Others fans took to the comment section to share their thoughts. One user wrote: “Kids are getting so big!! Way to go Chiefs!” while another added: “GO CHIEFS!”

Meanwhile, other fans love Rhiannon Ally and DeMarco together. The following day, Rhiannon shared a photo of herself from the set of the morning show on Instagram. She wore a chic little black dress as she announced the Oscar nominations. One fan wrote: “Amy who? Make Rhiannon and her partner the permanent hosts.”

ABC has no intentions of replacing TJ & Amy

TJ Holmes and Amy Robach’s personal relationship affected their career. According to reports, it’s unlikely that the duo will return. ABC News President Kim Goodwin admitted it wasn’t an easy choice to make. The two will remain off the air until the investigation ends.

According to a new report, ABC has no intentions of replacing TJ and Amy with Rhiannon Ally and DeMarco Morgan. Sources told TMZ the network hasn’t chosen replacements despite the news the original co-anchors are on their way out. The show is still working on the internal review and wants to conduct a full investigation.

GMA is looking into the reports of TJ’s alleged affairs with multiple staffers. They also want to see if there are any issues with the workplace environment. Some reports claim that DeMarco and Rhiannon Ally could take their spots. TMZ’s sources say it’s not true and no one is being “tested” for the position.

What are your thoughts? Do you love Rhiannon Ally and DeMarco Morgan? Do you think they should replace TJ and Amy? Sound off below in the comment section.

Check back with TV Shows Ace for more news on Rhiannon Ally and her colleague DeMarco Morgan.

Chanel Adams is addicted to reality TV. She’s been writing about entertainment and pop culture since 2006-07. When she’s not always writing about TV topics, she creates dynamic blog posts and long-form content for SaaS and marketing companies.