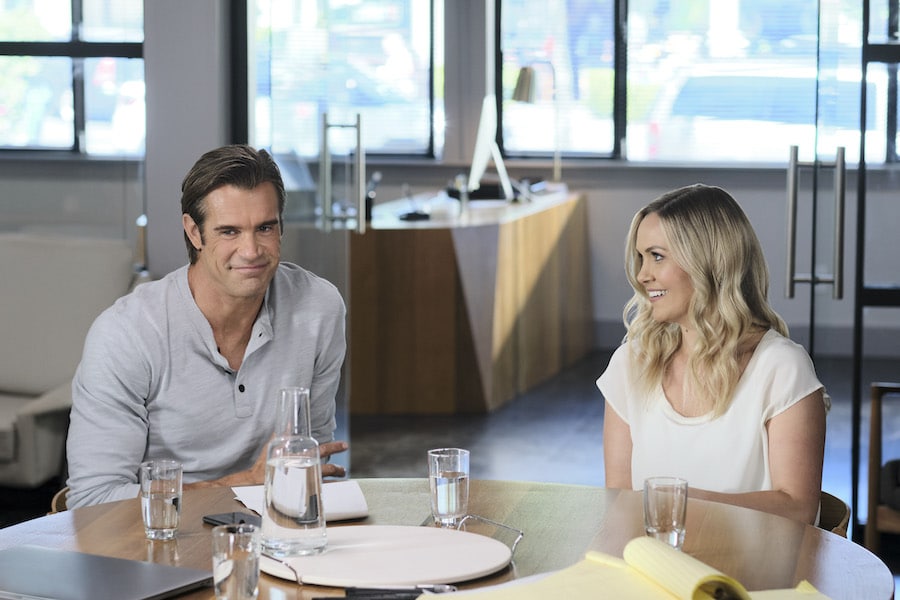 Chessies, are you ready to return to Hallmark’s Chesapeake Shores for the final season? Less than a week ago, the cast and crew had their “Last Supper” together. That was immediately after they filmed their final scenes in Canada. After that, Hallmark officially shared the premiere date. Finally, here are the most recent details.

On Friday, TVLine reported that Chesapeake Shores has an official premiere date. Although the series just completed filming, they already know when it will premiere on the Hallmark Channel.

Therefore, Hallmark took to Twitter to confirm the Chesapeake Shores Season 6 premiere. They wrote, “The rumors are true!! Chesapeake Shores 🌊☀️ returns to Hallmark Channel on August 14! Come see what the O’Brien family has been up to! What are you most excited about #Chessies?”

Chesapeake Shores is about the O’Brien family, a tight-knit family who lives in a charming town on the Chesapeake Bay. This series is based on the Sherryl Woods series. Their fan base, called Chessies, loves the O’Briens.

How Many Episodes Will Be In Chesapeake Shores Season 6?

Chessies may be super excited to learn how many episodes Hallmark filmed of Chesapeake Shores Season 6. This final season will consist of 10 episodes so it is supersized.

The rumors are true!! Chesapeake Shores 🌊☀️ returns to Hallmark Channel on August 14! Come see what the O’Brien family has been up to! What are you most excited about #Chessies? pic.twitter.com/anfpneyYeJ

Back in March, Hallmark announced that the series was returning for a sixth and, sadly, final season. Therefore, this will be a very special season for Chessies. There promises to be resolution for some characters, as Chessies get to say goodbye to their beloved show.

Hallmark’s SVP of Programming Laurie Ferneau stated, “With a top-notch ensemble cast and creative team, Chesapeake Shores has shared stories that are relatable, poignant and unforgettable. We look forward to honoring the journey viewers have been on with the O’Briens with one final, special season.”

Who Is Coming Back For The Hallmark Series’ Final Season?

Currently, we know of a few actors coming back to the beloved series for the final season. So far, Meghan Ory, Robert Buckley, Treat Williams, Barbara Niven, Laci J. Malley, Emilie Ullerup, Brendan Penny, Andrew Francis, and possibly more are returning. It looks like Stephen Huszar was in the BTS photos, as well as Carlo Marks. Unfortunately, there has been no word on whether Jesse Metcalfe will come back, even for a cameo.

How Can You Watch The First Five Seasons Of Chesapeake Shores?

Whether you are new to the O’Briens, want to catch up, or rewatch the series before the August 14th premiere, all five seasons of Chesapeake Shores are available on Hallmark Now.

Are you ready to say goodbye to this beloved show? More importantly, how excited are you for the season premiere? Let us know in the comments below. Finally, don’t miss the premiere of Chesapeake Shores on Sunday, August 14, at 8 p.m., Eastern.

Georgia Makitalo has been a freelance writer for 14 years. She enjoys writing about Hallmark, Lifetime, GAC, UPtv, and anything Austen. In her free time she enjoys traveling, hiking and researching Pre-Raphaelite art.

The Daily SpoilerTV Community Open Discussion Thread – 15th August 2022
Kevin Can F**k Himself – Episode 2.01 + 2.02 – Promotional Photos
The Lord of the Rings: The Rings of Power Gets Double-Episode Premiere on Prime Video
Anne Heche Organ Recipient Found As Actress Removed From Life Support
What to Watch: The Princess, Echoes, Bad Sisters
Follow us on Facebook
Follow us on Twitter