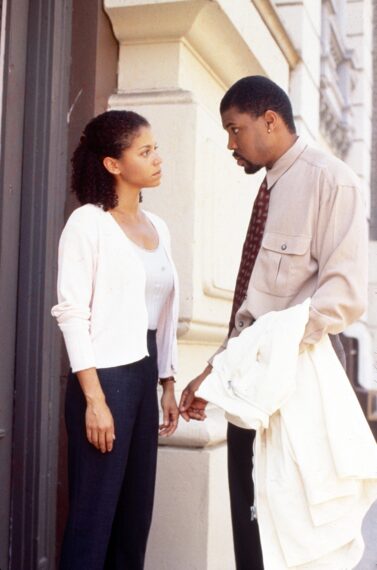 Are Dr. Peter Benton and Jeanie Boulet getting A Second Chance at Love? Not exactly, but that is the title of the new Hallmark Channel movie that will reunite ER‘s Eriq La Salle and Gloria Reuben onscreen for the first time since the NBC medical drama (1994-2009).

In A Second Chance at Love, premiering Saturday, March 26 at 8/7c, “on the surface, Alicia (Alvina August) and Arnold’s (Jarod Joseph) marriage is picture perfect — however, there is something amiss,” the logline reads. “Arnold is ready to grow their family, but subconsciously Alicia is hesitant to the idea. Rather than face the problem head on, Alicia, the self-proclaimed ‘love doctor,’ immerses herself in her divorced parents Jack (La Salle) and Brenda’s (Reuben) dating affairs by setting them each up on a blind date dating app.” “I’m excited to work with Hallmark again and reunite with Gloria,” La Salle said in a statement, with Reuben adding, “It’s wonderful to join the Hallmark family and to reunite with Eriq after so many years, especially in a completely different genre of storytelling!”

Said Lisa Hamilton Daly EVP, Programming Crown Media Family Networks, “We are so excited to reunite Eriq and Gloria in this all-new movie. With 20 years passed since they last appeared on the screen together, this heartwarming romcom will showcase their undeniable chemistry — a treat for viewers ready to see this television reunion. I’m looking forward to it and I know so many ER fans are, too.”

POLL : What did you think of Grey’s Anatomy – Double Episode Season 18 Finale?
Khloe Kardashian Talks Tristan Cheating Scandal – ‘All of it is f–ked up’
‘OutDaughtered’ Blayke Busby Looks Stunning On Graduation Day
This Is Us Series Finale: Mandy Moore Reveals Several Scenes Were Shot Years Ago
The Resident Round Table: Nic’s Return, an Underwhelming Love Triangle, & Hits and Misses of the Season!
Follow us on Facebook
Follow us on Twitter