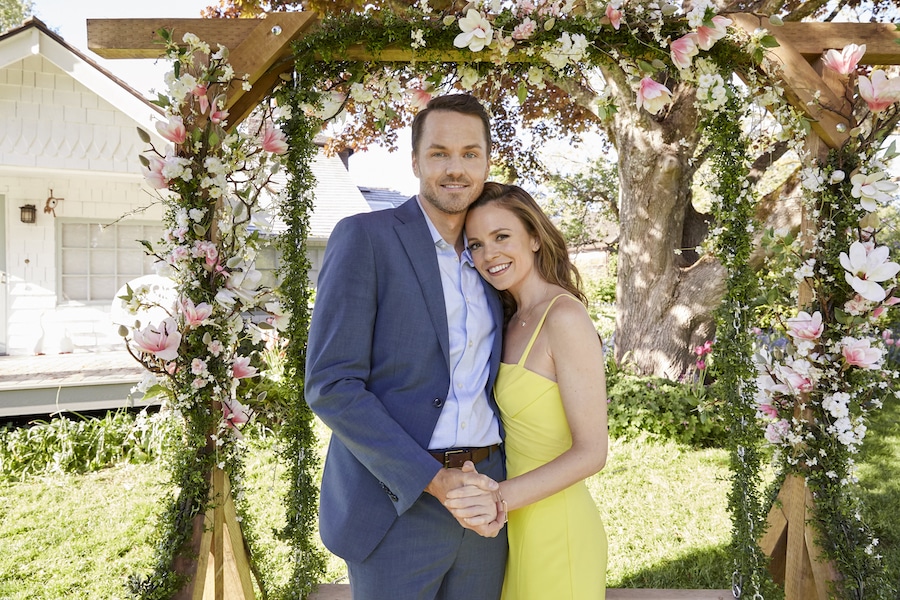 Just as Hallmark has ushered in Christmas In July, they have now announced what comes after. This is the Fall Into Love event. These are romantic, laid-back, end-of-summer love stories that viewers will adore.

The all-new movies include the PenaVegas, Lacey Chabert, When Calls The Heart’s Kavan Smith, Holly Robinson Peete, and Karen Pittman. In addition, an onscreen fan-favorite pair, Paul Campbell and Rachel Boston are reunited.

Here are the upcoming Fall Into Love movies.

Hallmark’s Love In The Limelight Kicks Off Fall Into Love

Firs off, Love In The Limelight stars real-life couple Alexa and Carlos PenaVega along with Ivonne Coll. This movie will premiere on Saturday, August 6, at 8 p.m., Eastern, on the Hallmark Channel.

According to ET, “After years of being pen pals with Nick (Carlos PenaVega), Summer’s (Alexa PenaVega) teen crush and former lead singer of the popular boy band The Mendez Boyz, the two finally meet in person when he comes to town for a comeback concert. Their friendship has set the stage for romance and Summer’s abuelita (Coll) — a hip grandma with a growing TikTok following — encourages her to follow her heart.”

Next up, Big Sky River stars Emmanuelle Vaugier and Kavan Smith. This Fall Into Love premiere airs Sunday, August 7, at 9 p.m., Eastern, on Hallmark Movies & Mysteries. It is based on Linda Lael Miller’s novel.

Tara Kendall (Vaugier) needs to take a break as she wants to get away from New York City, and her ex-husband. Therefore, after booking a summer rental, she heads to Parable, Montana. Of course, Tara has a history in the small town. When she was a young girl, she visited and fell in love with horses, and horseback riding.

Meanwhile, her temporary neighbor, Sheriff Boone Taylor (Smith), is just getting his life together again, after the loss of the love of his life. However, he finds that there is something very special about Tara, and hopes she has come to Parable to stay.

Yet real-life issues start to make Tara question what is next. When her stepdaughter contacts her for help, Tara now starts to realize she has people she has to be held accountable for. Still, there could be a way to make it all work.

Ella (Elliot) is a plus-size designer who’s inspired publishing mogul Derek (Hollingsworth) to include her clothing in his publication. However, it is not long before Ella has influenced Derek’s life in more ways than one.

The Journey Ahead stars Holly Robinson Peete and Kaylee Bryant. It premieres on Sunday, August 14, at 9 p.m., Eastern, on Hallmark Movies & Mysteries.

A famous Hollywood actress (Robinson Peete) and a young wilderness expert (Bryant) drive together from Los Angeles to New York. Along the way, both women learn they can’t run from their past to create the future they want.

Next on the list is Dating The Delaneys which reunites The Last Bridesmaid stars, Rachel Boston and Paul Campbell. This premieres on Saturday, August 20, at 8 p.m., Eastern, on the Hallmark Channel.

“Maggie Delaney (Boston) is a divorced mother who ventures into the dating world with some help from Michael (Campbell) the single father of her son’s friend. At the same time, Maggie’s mother Barb (Karen Kruper) and her teen daughter Emma (Zoë Christie) begin romances of their own. As these three generations of women explore the highs and lows of modern dating, they learn that love and romance can be found at any age… and sometimes where you least expect it.”

“Based on the book by Katie Lee Biegel. On the heels of a personal and professional setback, Emma (Chabert), a chef from Atlanta, travels to Hawaii where she meets Ben (Rivera) a handsome, reclusive surf instructor whose lessons help her to regain her footing.”

When Does Game, Set, Love Premiere On Hallmark Channel?

Taylor (Williams) is a former professional tennis player. She reluctantly agrees to coach her former doubles partner Ashley (Jennifer Khoe) and her new partner, Will (Harmon). Will needs a reboot as he is in desperate need of repairing his reputation to continue his career. Though Taylor and Will start out on the wrong foot, she is soon surprised at what she discovers. More so, Taylor soon finds herself Will’s doubles partner when Ashley gets injured. Is this a perfect match?

“At a crossroads in her career and love life, Allison (Pittman) is in need of the love and support of her two friends Melina (Drake) and Reesa (Ash). When they visit her in Tuscany, the reunion causes each woman to reexamine the state of her own life and relationships. While they have different personalities and perspectives, they know each other’s truths and help to make life-changing decisions.”

These all seem extremely exciting, new, fun, and different with some of the best actors Hallmark has to offer. So, which movie are you looking forward to watching during the Fall Into Love event? Let us know in the comments below and get ready to Fall Into Love.

Georgia Makitalo has been a freelance writer for 14 years. She enjoys writing about Hallmark, Lifetime, GAC, UPtv, and anything Austen. In her free time she enjoys traveling, hiking and researching Pre-Raphaelite art.