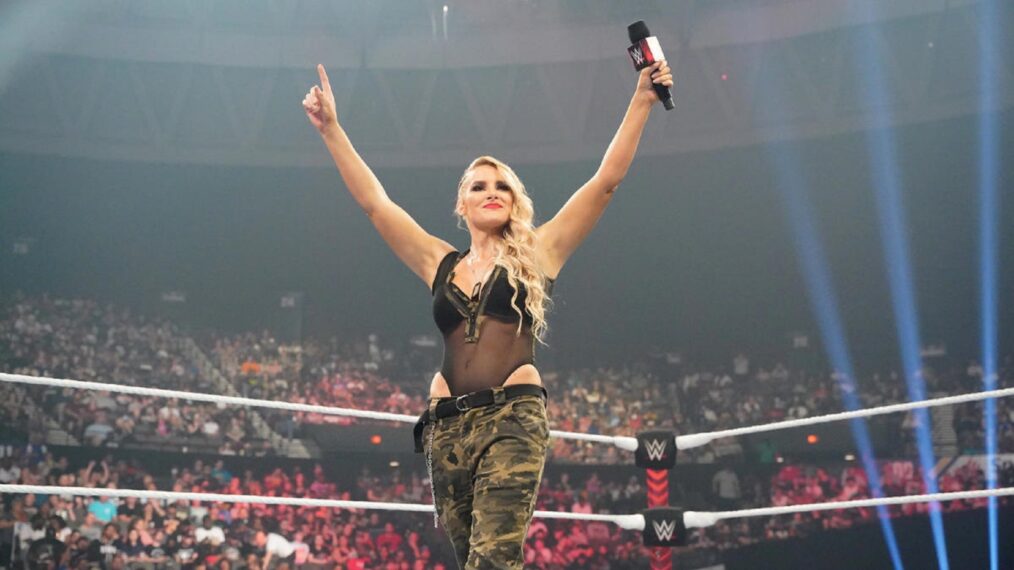 Lacey Evans dug deep, peeling away layers of herself to audiences during a series of emotional vignettes ahead of her return to WWE in April. A little more than a year prior the “Sassy Southern Belle” gained momentum thanks to a heated rivalry with Charlotte Flair and was set to face Asuka for the Raw women’s championship last February. This match never happened as Evans announced she was expecting.

The retired marine leaned more into her incredible life story upon her comeback last few months. A series of segments each week saw Evans open up like never before on WWE TV She spoke about perseverance and overcoming a tough upbringing as her parents battled their demons and depression. The superstar got back in the thick of things with a win over Xia Li on SmackDown. The victory secured a spot in the upcoming Money in the Bank ladder match.

Ahead of the Peacock premium live event in Vegas, we caught up with the patriotic performer to talk about her journey back to the squared circle. There was a point where a number of women were pregnant or new moms around the same time. Was there a support system formed from that shared experience?

Lacey Evans: We all kind of kept in touch. It was me, Becky [Lynch], Ronda [Rousey], and Sarah Logan. Every now and then we’d reach out to see how each other was doing. It was pretty good to have other women in the same career field being able to do that.

Do you find seeing Becky and Ronda’s comebacks further motivated you?

I think that empowers all women, Mothers or not, just to see women who chase dreams and have success and happiness and have a baby and come back. The motivation is there, even now. When I hear Ronda’s music, Becky’s music hits. My music hit. Seeing these mothers go out there and do what they have to do and then go put their babies to bed. It motivates the hell out of me.

What was the process of getting back in ring shape? Was there anyone specifically you worked with ahead of your return?

Ivy Nile at NXT is a very motivated and hardworking girl. Six weeks postpartum I drove down to Orlando and got in the ring at the Performance Center. She really made me push myself. We got to work quite a few times together. The only way you can get in that ring shape is when you are in the ring. I’m blessed that I can get top-of-the-line training and equipment to get back in shape. A lot of moms don’t have that option in their careers or everyday lives. It was cool to get back down there to partner with her and have her pull the best out of me.

How was it opening up the way you had through those weekly segments as The re-introduction of Lacey Evans? That couldn’t have been easy.

It was one of the hardest things I’ve ever had to do. You have to think I’m not the only one hurting in this story. I have a lot of family who have had to relive it when I retell it. I have to relive it and it sucks, but it is worth it. I wore the big hats and high heels and got my foot in the door. Now that I’m in there I dug my boots out and can use my platform. With WWE’s support to talk about things that suck. Things that normally wouldn’t be talked about on live TV in my position. The mental health, the addiction, I”m very thankful they are allowing me to tell my story because it’s so much bigger than who I am or who I’ll ever be. It is still hard. Reading messages from fans, hundreds and thousands, hearing what they are going through and been through. Even so, it hurts. God gave me this platform for a reason, and I want to help as many people as I can.

Was this direction planned all along as discussions for your return began?

I’ve been wanting to tell this story since I became a sports entertainer with WWE, since my tryout. That wasn’t in the cards. I had to do what I had to do to make it and learn. Now that I’m here, and I get to use this platform to tell this story, it has always been a hope and dream of mine. Six weeks postpartum, I pitched 19 pages worth of ideas. If I could tell the world the real heartache and pain Lacey Evans goes through, maybe I could help everyone listening and help. I don’t think there is anything more entertaining than somebody who has been through hell and fights every single day to make it and make the best of their situation, regardless of what they’ve been through.

Were you worried at all WWE was going to change directions?

At the end of the day, you have to do what you have to do. There was nothing new to me that I wouldn’t adapt or overcome. It was a thought of what if they don’t take to it? For every 30 motivational thank yous, I had about five boo hoos. I knew there were millions who felt my story and needed to hear it. For the rest of our lives, those promos, stories, and those words are out there. I know there are babies out there suffering and can hear those words to pull through. I know that there are parents out there who are making terrible decisions. Now they can see a superstar with a platform as big as mine tell them. Your story is so inspirational? Have you had anyone reach out to adapt your story into a movie or TV show?

Yeah. I’m actually writing a book. My everyday life is a fight. I’ve had people come to me to tell me to write a book or make a movie. My life is crazy, but I’m writing a book now. Hopefully, down the line, I hope we can tell more about not only what I’ve been through but what I continue to go through to stay positive and break the cycle.

Do you feel this added importance since Money in the Bank is happening Fourth of July weekend?

I love America and representing it and everything it stands for. There is a lot of negativity watching the news or viewing social media. I believe that Americans have what it takes to bring each other up and fix what is broken. I’ll never stop fighting for that. I served my country to help serve others. I don’t want the world to forget what red, white, and blues stand for and what we are capable of as Americans together. I’m not going to stand down. What do you make of the Money in the Bank field?

Raquel [Gonzalez] is huge. I’m not just talking about her ability but her mass. She is a strong, powerful woman that is going to be a threat. Liv Morgan is fast and passionate. Those two I’m going to keep my eye on. I’m going to outrun Raquel and take Liv out from the kneecaps so that way she can’t run up that ladder faster than me.

If you win, who would you cash in on?

It would be the woman with the name “Baddest Woman on the Planet” Ronda Rousey. With her being on the same planet as me and her getting that title, I have a lot to say and prove. I think she is strong and powerful, but she is not Lacey Evans.

Best Lines of the Week (August 5-11): ‘Knees Before Cheese’
Watch The Bachelorette Online: Season 19 Episode 6
‘Only Murders in the Building’: Who Really Killed Bunny Folger? (POLL)
Kevin Can F**k Himself – Episode 2.03 – Promotional Photos
‘The White Lotus,’ ‘The Resort’ & More Hotel-Set TV Shows to Watch
Follow us on Facebook
Follow us on Twitter