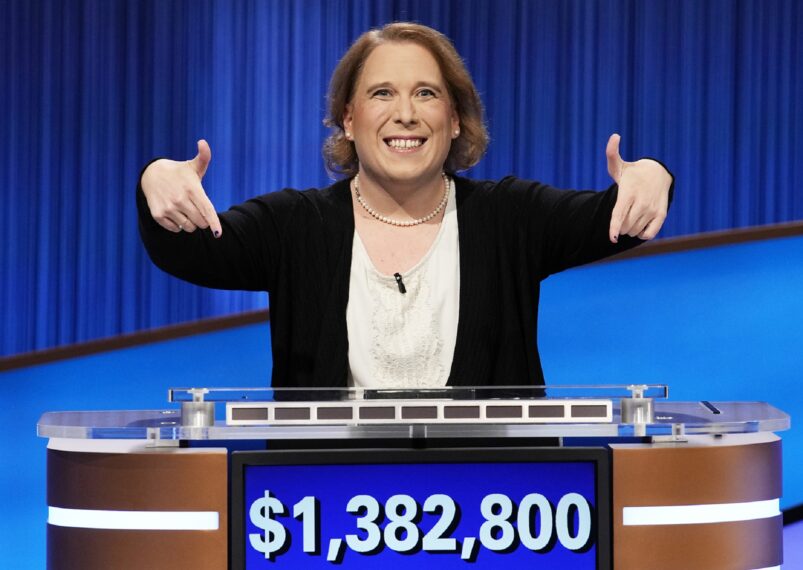 Amy Schneider‘s Jeopardy! run has officially come to a close as the champ with the show’s second-most consecutive wins ever was defeated by competitor Rhone Talsma.

After a 40-game winning streak, Schneider’s record-breaking stint on the game show came to an end when Talsma, a librarian from Chicago, finished in first place with a score of $29,600 in comparison to her second-place finish of $19,600.

The Final Jeopardy! category was “Countries of the World” and the clue read, “The only nation in the world whose name in English ends in an H, it’s also one of the 10 most populous.” Schneider fell short when she didn’t provide the correct response which was “What is Bangladesh?” Before the Final Jeopardy! category, Schneider led with a score of $27,600 in comparison to Talsma’s $17,600. Fret not though, Schneider fans, because the impressive player will return for the Tournament of Champions in which she’ll face-off against fellow Season 38 player Matt Amodio. Along with being the player with the second most consecutive wins behind current host Ken Jennings — who still reigns supreme with 74 consecutive wins — Schneider walked away with a total of $1,382,800 in winnings, putting her in fourth place for all-time regular season cash winnings. Her place in the lineup follows biggest winner Jennings ($2,520,700), followed by James Holzhauer ($2,462,216), and Amodio ($1,518,601).

“It’s really been an honor,” Schneider said. “To know that I’m one of the most successful people at a game I’ve loved since I was a kid and to know that I’m a part of its history now, I just don’t know how to process it.”

Only time will tell if Schneider’s defeater Talsma will have as strong of a run as hers, but his win was clearly a shock to the system as he said in a statement, “I’m still in shock. This is my favorite show … I was so excited to be here and I just wanted to do my best. I did not expect to be facing a 40-day champion, and I was excited to maybe see someone else slay the giant. I just really didn’t think it was going to be me, so I’m thrilled.”

Stay tuned to see how Talsma does in the next game, and keep an eye out for Schneider’s return in the Tournament of Champions.