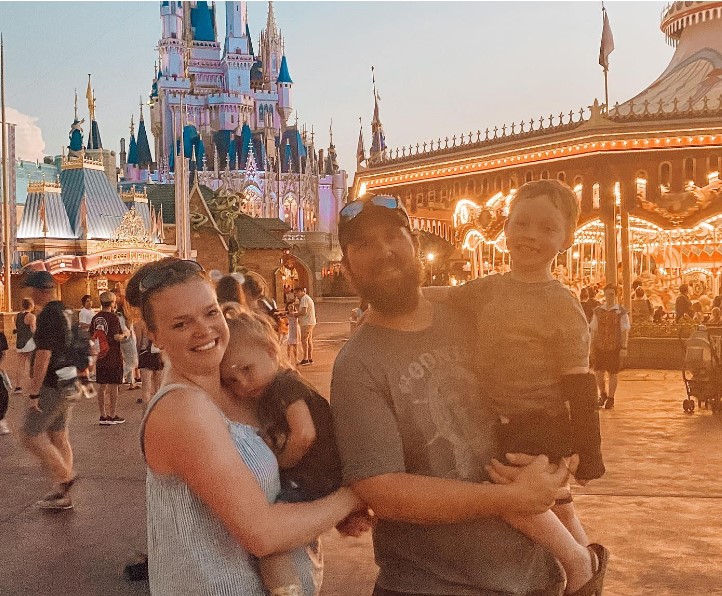 Sister Wives fans just can’t get enough of Maddie Brush’s children. She’s the mother of five-year-old Axel and two-year-old Evie. But on the show, she said she and her husband Caleb would really like to have three or four children.

On Instagram, Maddie frequently posts updates about the children and family life in general. It seems like Evie and Axel are growing up very well.

But one recent video is just too cute. Keep reading to see a photo and see why fans fell in love with it.

Maddie Brush shares an adorable video with her Instagram followers

Anyone with multiple children knows that they fight from time to time. And Maddie Brush’s children are no exception.

However, Axel and Evie really appear to get along more often than they fight. Their mother frequently posts sweet moments the two share on her Instagram page. It appears that the family enjoys activities like gardening and cooking together. The family of four even took a trip to Disney not too long ago.

But it’s a recent video in her Instagram stories that’s capturing a lot of attention.

“This hug was completely unprompted,” Maddie captioned the video. In it, Evie throws her little arms around Axel’s neck. He hugs her back. “They are at the age where they are best friends and I’m here for it. They still fight. But they love each other.”

The family is really enjoying the summer months and spending time playing outdoors together. So this definitely isn’t the only cute photo Maddie has shared recently.

She also uploaded photos of the kids playing with chalk outside in the sunshine. She added that it’s an activity that even she and Caleb can get into. Fans can’t wait to see what the family does next.

Will the Brush family make any Season 17 appearances?

Rumor has it that Sister Wives Season 17 is already filming. Since the Brush family lives in North Carolina, they probably won’t make very frequent appearances. However, fans really can’t get enough of Axel and Evie. So they may make some time to film.

Janelle Brown recently posted that she and Savanah were flying out of Arizona to go visit Maddie’s family. Kody was noticeably absent, prompting some fans to think that Kody and Janelle quietly split. If they did, this could possibly be a storyline in the 17th season. Fans would definitely want to know how Maddie Brush reacts to that.

But for now, fans will just have to be patient and see what happens next.

Don’t forget to follow TV Shows Ace online to keep up with Maddie Brush and her sweet family. Maddie posts quite frequently, so there’s always news to share.

POLL : What are you watching Tonight? – 18th August 2022
‘South Park’ Turns 25: See the 10 Best Episodes as Chosen by Fans
Monarch: FOX’s Country Music Drama Casts Shania Twain, Martina McBride, and More!
USD POLL : Which scene where a villain was defeated is the most satisfying to you?
Wednesday: Netflix’s Addams Family Series Sets Fall Premiere, Unveils Spooky Trailer
Follow us on Facebook
Follow us on Twitter