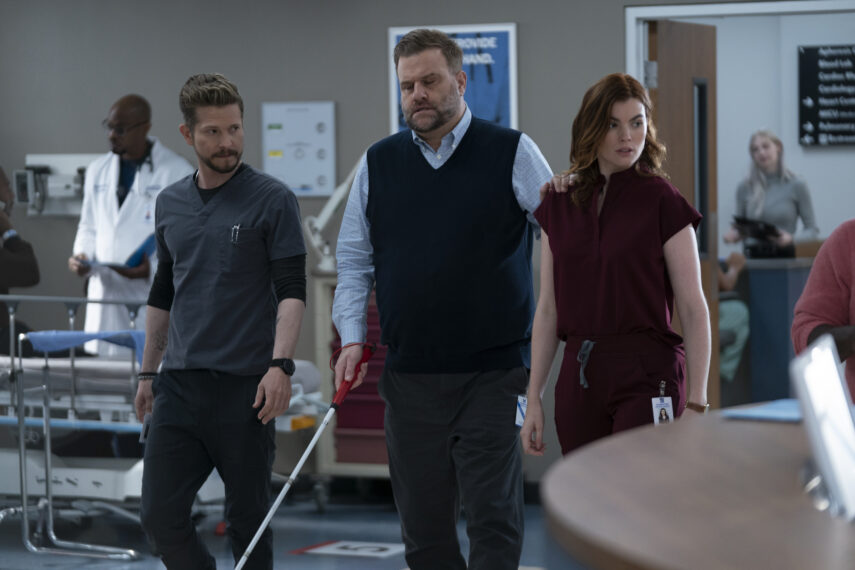 [Warning: The below contains MAJOR spoilers for The Resident Season 6 Episode 3 “One Bullet.”]

As the latest episode of The Resident shows, one bullet can cost a hospital — supplies, healthcare workers, and the other patients.

Conrad (Matt Czuchry) and Cade (Kaley Ronayne), while out on another call, find a gunshot victim. The nearest hospital won’t take him, and so they have to go to Chastain. Once there, this patient uses up nearly all the hospital’s blood and is treated by 100 healthcare workers. And what’s worse: Padma (Aneesha Joshi) is there for her C-section, which gets pushed (due to necessary changes in the ORs’ schedule), until it becomes an emergency situation. Padma’s twin, Leela (Anuja Joshi), ends up saving her life. And just as Conrad and Nurse Hundley (Denitra Isler) are heading out at the end of the episode, another gunshot victim comes in, for it to start all over.

Showrunner Andrew Chapman, who wrote the episode, explains why it was so important to highlight this issue.

Not only do you address the significant supplies and healthcare workers — I liked how you kept track of that number — but you also put Padma in a potentially fatal situation as a result of this one bullet. When did you know you wanted to have the two go hand-in-hand?

Andrew Chapman: We have an ER doctor [as] one of our staff writers, and he has talked about the effect that gun violence has on doctors in his ER. He’s told stories about it, and they’ve been just incredibly powerful, emotional stories. He told a story where he broke down in tears practically: A young person found a gun in their home, tried to commit suicide, shot their head off basically, and died. They worked on this person in the ER for hours to try to save them and couldn’t. It took a huge amount of resources from their hospital and it took a huge amount of time and then it took an enormous psychological toll on the doctors, and hearing this story and other stories that he and all of our doctors have told was really this incredibly moving, powerful thing, and so we as a group decided we wanted to tell a story about gun violence, but in a non-political way. We did the thing The Resident is always supposed to do, which is examine a medical issue from our doctors’ point of view. That’s the thing Amy Holden Jones, our creator, has always wanted to do and always hammered on as our take, and so we decided we would tell the story of what happens when one person with one bullet shows up in the hospital and all the havoc it can wreak on that person, on the finances of the hospital, on the schedule of the hospital and then the psychological toll it takes on our doctors.

I wrote this episode and I was like all in for that. I wanted to make the entire episode about that. But Amy had this brilliant idea — we knew that Padma was going to give birth this season but we didn’t know when — [to] combine Padma’s birth with the entrance of this person with one bullet, so you have giving birth, life, and you have this terrible, tragic bullet taking life at the same time. At first, I’ll be totally honest, I was kind of resistant. I was like, I’m not sure I want to sully the beauty of this one bullet episode. But of course it turned out to be the perfect thing to do because it just showed the knock-on effect that a bullet can have in a hospital and then when the knock-on effect is on one of the characters that we love and it’s about giving birth, the effect is just incredibly powerful.

This episode comes as the hospital may be facing shortages going forward due to the new governor and likely budget cuts. How much are we going to see what we happened here — running low on blood, healthcare workers stretched thin, ORs unavailable — again this season?

Those specific things — running short on blood, nurses being unavailable —may be little bits and pieces within larger stories. But the story of a big public hospital facing healthcare cuts, budget cuts is one that we’re gonna tackle over and over again this season, again in a non-political way. The governor’s just a stand-in for state government not wanting to spend a ton of money on healthcare, which is always a problem. All these big public hospitals are wildly underfunded across the country, and all these private hospitals do great. It’s part of the intense dysfunction of our healthcare system, and it’s part of why The Resident exists as a show and I think why people like it as a show, because it shines a light on this thing that everybody has to deal with in their lives. What hospital do I go to? Is my hospital funded, underfunded? It’s this underlying debate all through American society.

Speaking of the psychological toll, we see it starting all over again at the end of the episode. It becomes “how can we keep going?”

This is the other thing — and we talk about this a little bit in the episode — that I just found completely fascinating and it’s getting into the weeds a little bit, but they distinguish in trauma in an ER between what they call blunt trauma and penetrating trauma. Blunt trauma’s you get into a car accident and one car hits another and it’s blunt and you sustain trauma in a blunt way, or you’re at the workplace and something falls on you and that’s blunt trauma. People who experience blunt trauma, they tend to be middle class, they tend to be insured, they have money, they can be taken care of. Hospitals, I’m not saying they like to take care of those people, but they will accept those people into their ERs and into their ICUs without question. They’ll take care of them and they won’t try to ship them out.

But people who get penetrating trauma — bullets, stab wounds — they tend to be poor. They tend to not have money, and they tend to be uninsured or underinsured. Hospitals hate those people. They don’t hate them as people, but they don’t want to take care of them. It costs them huge amounts of money. This is something that our ER doctors talk about, and it’s this unknown thing in the healthcare system. There’s no other show that explains those things to the public, and we do. I’m super proud of that. I think we all are. It’s, as Amy said, the mission of this show to expose the issues in healthcare so that people can understand them in a digestible way.

What happens with Padma has to affect her, Leela, Devon (Manish Dayal), and AJ’s (Malcolm-Jamal Warner) relationship with each other and as a group — and there was that moment when Devon was listening as Padma made Leela promise to make sure the twins are taken care of. What’s coming up for the four of them?

Yes. Definitely, it’ll have reflections on Devon and Leela and their decisions to have kids, but also on AJ, on his decision to be a dad and to be involved with the children. And Padma is a complicated person. Maybe she rushed into it a little bit and she even says, what was I thinking? And now she’s dealing with just the intensity of having children and having children alone as a single mom without really a job. It’s a big life decision, so that will play out throughout the rest of the season. Padma’s psychological state will play out, without giving away too much, over the course of the rest of the season. She’s had two huge trips to the hospital, once for an in utero surgery in Episode 1, now to give birth in Episode 3. And that kind of thing takes a toll. It can hit a woman hard. So we’re gonna go deep into that for the rest of the season.

Leela had to save her sister, which only happened because of what else was going on in this episode…

Right. And wasn’t Leela great in that scene where she just is like boss lady and takes over? I found it incredibly emotional watching her operate on her sister. And Anuja just nailed it.

Warrior Nun: Why It Needs To Be Your Next TV Obsession
Servant Final Season Trailer: The Turners Are in Mortal Danger As Leanne Embraces the Darkness!
Savannah Chrisley’s Ex Nic Kerdiles Shares ‘The Secret’
Family Law Season 1 Episode 9 Review: Blame It On the Mother
Chicago PD Midseason Finale Review – Burden of Proof (1009)
Follow us on Facebook
Follow us on Twitter