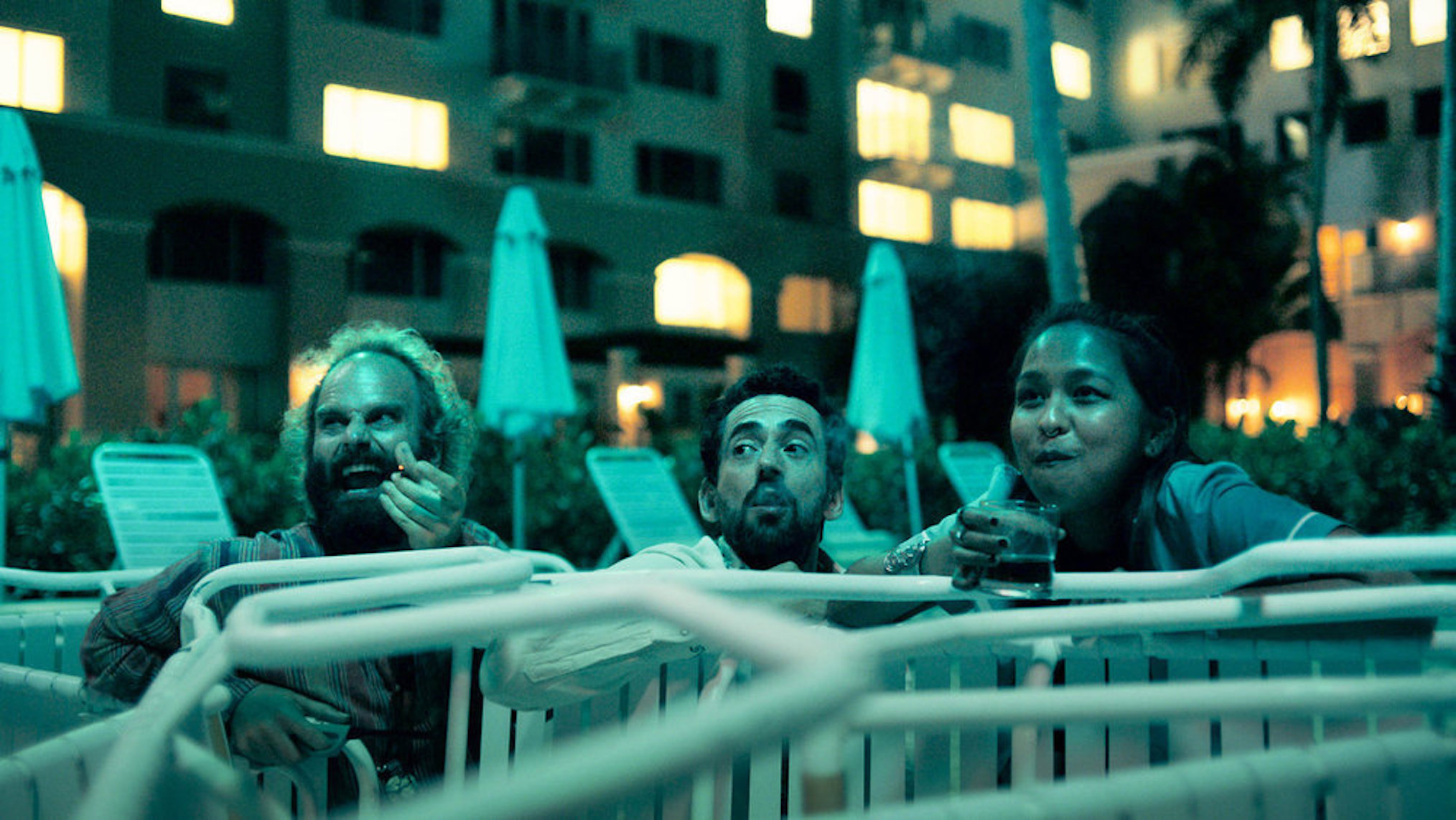 [Warning: The following contains MAJOR spoilers for The Resort Season 1 Episode 4, “A History of Forgetting.”]

If you thought you knew The Resort, Episode 4 just changed everything. It was the Baltasar and Alex show from start to finish. Viewers met the 2022 Baltasar (played by the delightful Luis Gerardo Méndez, who carries the episode alongside Ben Sinclair‘s Alex) in Episode 3 when he scuffled with Emma (Cristin Milioti) and Noah (William Jackson Harper). Luckily, Emma didn’t accidentally kill him, because the black sheep of the Frias family had almost all of the answers they were looking for.

The episode is mostly told in flashback with narrations from Méndez. He takes Emma and Noah back to the glory days of the now shut down Oceana Vista, giving much needed context behind Alex’s sticky note-strewn penthouse and the seemingly meaningless mural. We see the beginnings of Baltasar, Alex, and Luna’s (Gabriela Cartol) friendship during the hotel’s five-year prime, which ended with the once-in-a-lifetime hurricane that left Sam (Skyler Gisondo) and Violet’s (Nina Bloomgarden) fates a mystery for more than a decade. We learn of Alex’s “memory leakage” and see life from Alex’s perspective (including a meteor falling to Earth?), and time travel seems to come into play in a truly mind-bending ending that permanently alters the show’s trajectory.

In the very last moments of the episode, Baltasar tells Emma and Noah he thought Alex’s actions were that of a crazy person. But then, he points to a section of the mural that clearly shows Emma and Noah not far away from Sam and Violet in the painted penthouse window. The mural, mind you, was painted in 2007, and Alex died not long after finishing it. Here, Méndez breaks down the pivotal episode.

You went from a mysterious figure to being the star of Episode 4. How fun was that?

Luis Gerardo Méndez: It was fun! It was weird at the beginning, because Andy Siara reached out to me and was like, “I want to offer you this role in this show, it’s one of the leads.” And then he sent me the first two episodes, and I was barely in those episodes, so I was like, “Dude, what are you talking about? I’m barely in the show.” And he was like, “No, no, no, you need to trust me. Everything’s a setup. Episode 4 is everything about your character and the Oceana Vista and the golden days of this resort.” When I received Episode 4 and I read it, that was the moment when I was like, “OK, I definitely want to do this show,” because I understood the relevance of this character. All of the excitement became very clear.

When did you learn about the twist at the end of Episode 4?

When I read that, I screamed. I was like, “Oh my God! This is incredible. I never saw that coming.” And that happened a lot to me reading the show, even in Episodes 5 through 8. All the time, the show is transforming into something different, which is something I love as an audience member, but especially as an actor. At the beginning, I think it was just a leap of faith with Andy and the writers.

Cristin and Will didn’t know that much either. We didn’t know the real ending until two weeks before shooting it, because Andy’s very obsessive. He’s always changing it because he wants to do the best of what’s possible, which is incredible, but as an actor it can be very nerve-wracking. I like creating the arcs for my characters from the beginning, knowing where I’m going to end, and then being more specific with the colors you want to show during the whole process. But when you don’t have a final point clear from the beginning, it’s hard and you need to be trusting in the process and having fun, which I guess is also a good creative tool you can use as a performer. One hundred percent. That’s a great way of defining this character. What I was trying to channel in portraying Baltasar was my theater teachers — acting teachers that are very intense and pushing you to find the secret of your existence, and they’re super melodramatic and theatrical when they’re doing these classes. This guy is really obsessed with solving this mystery, and he’s treating Emma and Noah like acting students the whole time: “Hey, don’t be stupid! You need to open your eyes! Dig. Go deeper. What do you want? What do you need?” Those are the questions acting teachers are asking you.

I had that reference pretty clear from my acting school. I even have an acting coach right now. I’m 40 years old, I’ve been doing this for 20 years, and I still need someone to help me build these characters and make them more complex. I really believe this work is team work. I really wanted to use all of those things when approaching Emma and Noah to be a detective of their feelings. He really believes that feelings and memory are going to open the door to this mystery. He’s obsessed with that.

Do you think he believed that before he met Alex or after?

I think that was after. He’s obsessed with detective novels, so he has a lot of information about that. I played three detectives in the last year, and I asked my coach, “What the f**k is happening? Why have I played so many detectives in the last two years?” And he said that in a way, when you’re in your mid-age, your 40s, you become a detective of yourself, of your experiences on this planet. When you read a lot of detective novels and you’re very pressed in that world, you start asking those questions to yourself and being more aware of everything that’s around you, because there are answers everywhere.

To Emma, the obvious answers point to Baltasar and Luna being responsible for Sam and Violet’s deaths in some way, but Episode 4 shows nothing is what it seems. That kind of seems like the point of the show/a metaphor for life.

Exactly. And it was a lot of fun to create these fake clues for the audience, like in the first episode when I do this [gestures sliding finger across throat], I’m just talking about another iguana. But if you don’t have all the information, it looks like “I’m gonna kill that guy.” And Luna’s being mysterious, but she’s like, “Yeah, I stole whiskey from Alex.” That’s it.

What’s interesting about throwing these fake clues to the audience is that at the end of the day, they need to make sense. Because if it doesn’t make sense, it’s cheap. It’s poorly made. I was very obsessive with Andy, because it was my job to throw all these fake clues into the show. I was like, “I can do whatever you want, but at the end of the day, everything needs to make sense.” And we were very specific about trying to make that work. I think we did it, and I hope people see it that way. Memory leaking. Can you explain it?

I tried to make it as specific as I can, and the more real the better. I know people with Alzheimer’s, really close people struggling with those kinds of disease. That was my approach to Alex when he was forgetting about everything.

What do you love about Baltasar and Alex’s friendship?

Alex is a father figure for Baltasar and his best friend. He runs away from his family, and he has a line where he says, “I found this guy who saw in me, me.” Alex does that for Baltasar. He sees him. When something like that happens to you, it’s beautiful. It’s very special. You want to stay there forever. We never talk about the sexuality of Baltasar in the show, but I one day told Andy that I think Baltasar might be in love with him a little. There’s a fascination for how free he is, how crazy he is. I had a teacher who always told me, “You can never go wrong with the over-commitment with love.” With Baltasar and Alex, the more Baltasar is in love with Alex, the better. As a friend, as a father figure, as a platonic love, or as a romantic love, it’s going to make the whole show more devastating and special.

I think that’s one of the reasons he’s so obsessed with solving what happened to Sam and Violet, for Sam and Violet but also for Alex to understand, “Did he do something to them? What happened? I can’t believe Alex was capable of something like that.”

It’s a really beautiful relationship of someone seeing this guy for the first time and giving him an incredible opportunity to become who he wants to be. It’s a beautiful line, when he’s like, “What do you want to do? What do you want to be?” And he’s like, “I want to be a detective!” “Then be one, you motherf***er.” When you find someone who gives you the chance to do whatever you want, that’s gold. I want to be that person to a lot of people.

Baltasar has an easier time accepting this crazy reality that Alex described than other characters. Why do you think that is?

I think it’s a little bit of madness. He’s been trying to solve this case for 15 years, and I guess he started by doing the logical things of a detective, but when the logical stuff stopped making sense, he needs to start opening up to more things. Every time, he’s more open to whatever explanation he can find. He’s really desperate for answers and starts trying different approaches. I never thought he was fully convinced that his methods were going to work, but he needed to try.