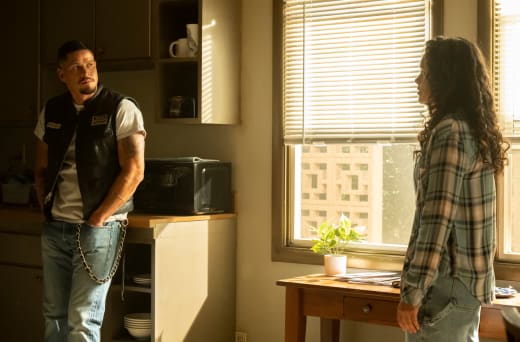 Now, that’s what you call a shocking hour of TV.

Mayans M.C. Season 4 Episode 7 pulled the rug from under the audience, turning many storylines on their heads and preparing us for more shockers as the season winds down.

Gaby’s return was a gasp-worthy moment, mainly because it felt like EZ was moving ahead with Sophia.

If you watch Mayans M.C. online, you know there was unfinished business between EZ and Gaby, but I didn’t expect their reunion to end with EZ killing his one-time lover.

EZ knew Angel, and the rest of the Mayans, were in jeopardy if Gaby went to the police, but it was a cruel development that irritated me more than anything.

Gaby had escaped a terrible life and was practicing medicine. I would have preferred her to stay away from the show and thrive in whatever she did in life.

EZ shooting her was one of the most shocking moments of the series, but it reiterated that he would do anything to keep his family intact.

He knows the sacrifices he has to make, but he’s crossed a line that he will be unable to come back from.

EZ and Gaby were among the strongest couples on the series during Mayans M.C. Season 3, so it sucks that it had to end like this.

The bigger question will be how EZ copes in the aftermath. Will he be numb to loss at this stage, or will he believe that the ends justified the means?

Angel will take on some of that guilt because he grabbed Gaby at the hospital. After all, she knew who they were.

Angel’s journey this season has been a rollercoaster, but I didn’t expect so much to happen to him in just one episode.

He lost Nails, his unborn child, and gained Adelita and the child he thought was dead. It was a lot, but it also reiterated that he’s making truly terrible decisions.

Again, trying to sleep with Leti also highlighted that he can’t be alone. The moment he knew Nails was done with him, he rushed over to Leti’s, clearly thinking she’d want to have sex with him.

Is he looking for comfort, or does he simply not want to be alone?

The return of Adelita was predictable because every road of her arc has been leading back to Angel, but will they really be able to put the past aside and become a family unit for their son?

Adelita went through hell to get the child back, while Angel moved on with other people.

There’s bound to be some resentment on Adelita’s part, but she doesn’t strike me as the type of person who will be able to lead a normal lifestyle.

She’s spent her life looking over her shoulder, always expecting someone to come after her, so it’s hard to imagine them being much of a unit for long.

They love each other, sure, but too much has happened.

Nails leaving Angel was the best decision she could make. Their relationship was built on a dream that they could be parents, and quite frankly, Angel didn’t love her.

He liked the idea of being a father, but their connection didn’t burn as bright as you would expect for a freshly engaged couple.

Nails truly did love Angel, but the feeling was not mutual.

I can’t even begin to imagine how Nails will process the loss of her child, but at least she knew the child was the only thing keeping the relationship intact.

On top of that, what if they got married and stayed together? Angel would be forever absent due to his ties to the Mayans.

Nails would worry that he wouldn’t return home, and after what happened to Coco, she should stay well away from the Mayans.

I hope this isn’t the end of her arc, but the show has too many storylines to serve all of the talented actors.

Felipe will be livid if he ever learns that his son murdered Gaby.

Felipe was instrumental in Gaby’s exit, knowing she would be able to thrive away from EZ and the pitfalls that come with being a part of a gang.

Gaby and Felipe had a rapport that translated well on-screen and knowing we’ll never get to see that play out again sucks.

The retaliation mission against the Sons of Anarchy seemed more like a half-baked revenge plan.

I know EZ said they would never expect it, but it should have been better executed.

Now that they’ve retaliated, the Sons of Anarchy won’t take long to put two and two together. They’ll have been well aware to expect some sort of vengeance for Coco.

Manny surviving the chaos at the hospital was a bright spot. We don’t know much about him, but there are clearly much more stories to be told about him.

“Dialogue With The Mirror” featured several shocking moments. It was a cut above recent episodes because there was more focus on the plots that mattered.

What are your thoughts on Gaby’s death?

Did you expect it to happen?

How do you think Felipe will react?

What’s your take on Angel’s actions?

The series continues Tuesdays at 10 p.m. on FX.